Sant Gadge played a significant role in revitalization of the Bahujan masses in the 20th century.  He represents the saintly legacy starting from Kabir, Ravidas, Dadu, Tukaram to Chokhamela, and so on. He selflessly contributed his labour in cleaning drive of village and mohalla as well as to built dharmashalas, ponds, dispensaries, old-age homes, hostels, schools and orphanages with the help of labour bestowal and donation. He thus lived as a working-class saint. He was contemporary of Babasaheb Dr Ambedkar and 15 years older than him. In the late 19th and early 20th century, when youths from “untouchable” section of the society were condemned to deep darkness of social inequality, Sant Gadge became a part of history by his glowing deeds.

Sant Gadge was born in a Dalit family on 23 February 1876 at Shengaon village in tehsil anjangaon surji of Amravati district of Maharashtra. His father’s name was Jhingraji and mother’s name was Sakhu Bai. His household name was Devidas Debuji Jhingraji Janerkar. Debuji always keep an earthen pot (gadga) with him. Later he became famous as Gadge Baba and then Sant Gadge. He used to take his meal in this pot.

He made broom stick, shramdan (voluntary labour) and vigour his instruments to execute work and influenced the masses. His actions become imitable for other. 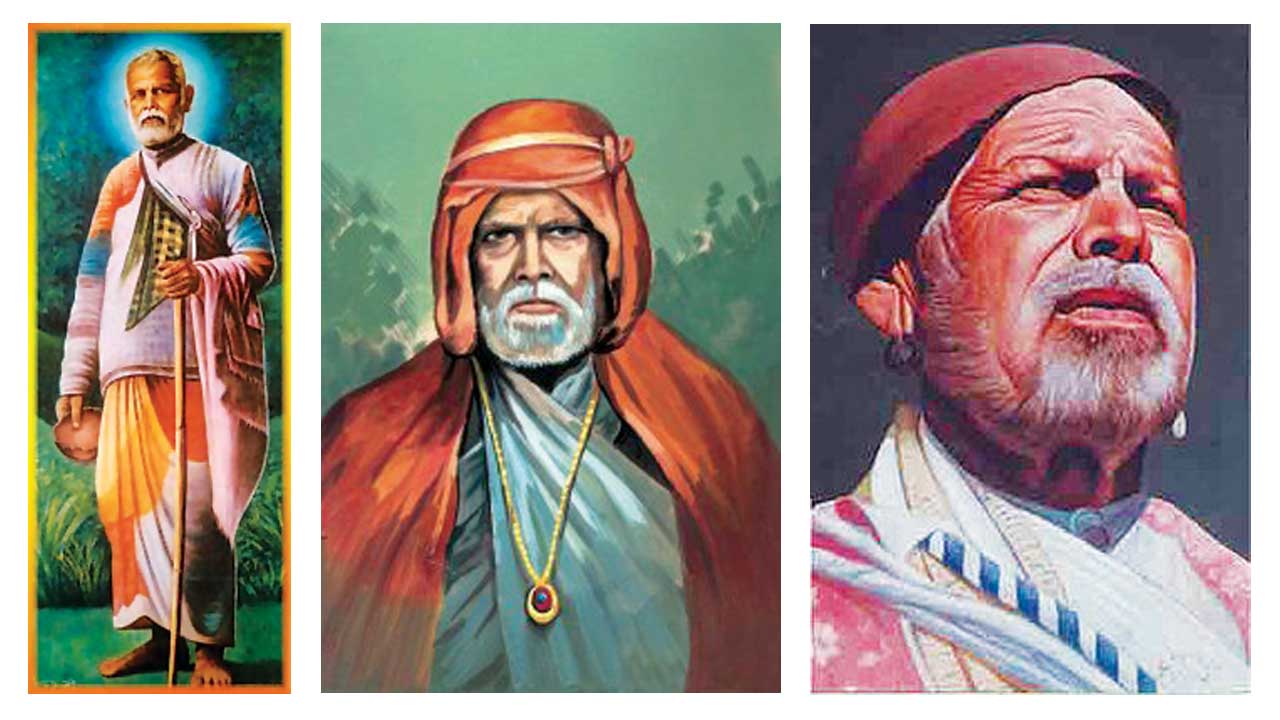 Sant Gadge made vigorous social action and public service his ideals contrary to conventional, and hollow, practices of like religious ceremonies, idol worship, offering, etc. He linked intellect, logic and discretion to his vigour and public service. He used to treat caste-varna evils as poisonous waste mixed in the religious books by vested interests. Belief in Karma, according to him, was a Manuvadi conspiracy. He often said that these false perceptions had made common people idle and nonprudent, and due to these they were falling behind. These false perceptions were propagated by the Brahmanists to serve their vested interest. He exhorted people not to put up with the status-quo and reject blind belief and inhuman religious traditions. Sant Gadge was opposed to Brahmanism and not to Brahmins. Several Brahmins had participated in his social work and shramdan programmes and many were his admirers.

The sant was of the firm view that education is the only way to change the life of the Dalits. He said sell your utensils if you must but attain education. Use your hands and palms to eat. But without education life is truly empty. He established 31 educational institutions himself.

Sant Gadge served the society for 51 years with a Trimurti, a three-pronged strategy – virtue of love, affection and duty towards poor and distressed people. He challenged the superiority of caste-varna of the Sanatanists and Tulsi Das’s arrogant theory “Pujiye vipra sheel gun heena, shudra na gun gan gyan praveena” (Bow even before worthless Brahmin,but not before learned and well-versed Sudra)  instead Gadge Baba said, “Pujahi charan chandaal ke, jau hobe gun praveen” (Worship the feet of a learned Chandal [outcaste, untouchable] and not the worthless Brahmin). Gadge Baba became the torch bearer of revolution against caste-varna and his efforts succeeded in determining the place and prestige of a man  on his intrinsic qualities and character rather than birth. To him protection of humanity is more significant than orthodox Sanatan Dharma. It can be said that the life and mission of Gadge Baba is greater than Sanatani Shankaracharya.

He criticized and refuted the inhuman codes of Hindu religious texts  and thus became true admirer of the words of Kabir “Jan jage kee aisee naad, vish saa lage ved-puarana” His intellectual movement continued to enforce till his death. He cleared the clouds, the false belief and dogma spread by Manuvadis. He was born in a Dhobi Samaj, which used to wash clothes but he waged movement to wash the polluted minds of people successfully during his life. He did not get opportunity to study but by self-study he acquired the skills toward basic reading and writing. He was little educated, but always emphasized the importance of education, cleanliness, social service as well as awakening a sense of intrinsic  value and enlightening oneself with eternal knowledge.

Gadge Baba had hoards of admirers – from manual labourers to ministers. Dr Ambedkar had no time for Babas and Sanyasis but he became admirer of  Gadge Bada because of the latter’s  social activities like campaign against caste system, construction of dharmashalas, etc. Dr Ambedkar called him the greatest public servant after Mahatma Jotiba Phule. Gadge Baba presented Chokhamela dharmashala to  Dr Ambedkar for his social work.

Gadge Baba died on 20 December 1956. The announcement of this death made from the Akashwani sent shock waves in many parts of the country. Gadge Baba’s body was placed in Rathore Garden, Badner, for people to pay their last respect. Ordinary people and ministers from the central and state government all came to pay homage to the great saint.

On 1 May 1983, the Maharashtra government divided the Nagpur University and established Sant Gadge Baba Amravati University.

The Government of India released a postal stamp in his name on his 42th death anniversary on 20 December 1998. In 2001, the Maharashtra government launched the Sant Gadge Baba Gram Swachhata Abhiyan (village cleanliness programme). Sant Gadge knew that social revolution for cleanliness must be launched in the villages. And now his work and philosophy had become the basis of government programme. After all, he was an institution in himself.

Rajendra Prasad is Deputy Director in the Public Works department, Bihar. He has been writing on current affairs in various newspapers and magazines