NEW DELHI:  On 11 December, around 300 Christians, including several bishops, priests and nuns, were detained by the New Delhi district police after they started a march towards Ashoka Road from Jantar Mantar. The demonstrators, including Catholic Archbishop Anil J T Couto and JD (U) MP Anwar Ali, were taken to Parliament Street police station and released after some hours. 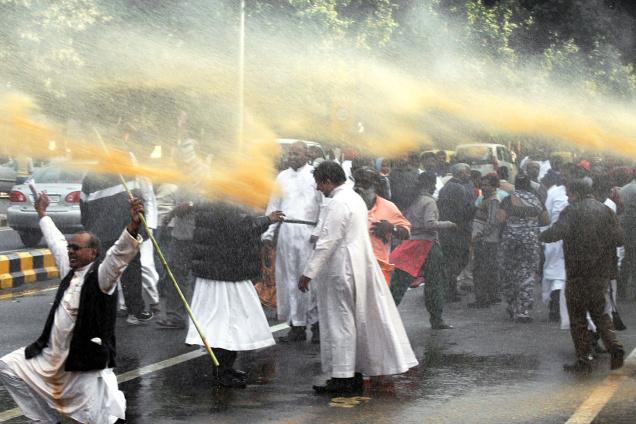 The Delhi police statement that “no force was used; there was no lathicharge” is contradicted by church spokespersons. Archbishop Couto stated, “The law is unconstitutional. While (many) governments have been turning a deaf ear to the demand of Christians, they have now assaulted our priests and nuns and arrested us too. Our lawyers are going to file a criminal case against the police for their brutal action.

”The Evangelical Fellowship of India (EFI) said, “A complaint has been lodged with the women cell of the police station against the Delhi police for policemen assaulting and beating Catholic sisters and other women with lathis and manhandling some of them. There was no policewoman present at the spot.” The unjust provision that these Christians and a few Muslims were protesting is the discrimination based on religion (contrary to Article 25) in the Constitution (Scheduled Castes) order of 1950. By subsequent amendments, Dalit converts to Buddhism and Sikhism have been included as SC but not Christian and Muslim Dalits. This despite the findings and recommendations of the Ranganath Mishra Commission (2007) and, subsequently, the National Commission for Scheduled Castes.