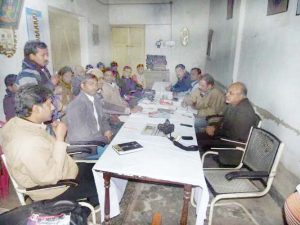 PATNA: On 18 January, a meeting of the district correspondents of FORWARD Press was held at Daroga Rai Trust Bhavan. On this occasion, Editor-in-Chief Ivan Kostka apprised the correspondents of the strategy and orientation of the magazine, along with the plans for the future. He said that the magazine primarily raised issues related to the interests of the deprived and neglected sections of society. The magazine, he added, also tried to take up the issues at the proper forum. Birendra Kumar Yadav, Bihar working bureau chief, urged the correspondents to spread the views expressed in the magazine at their personal level through social media.