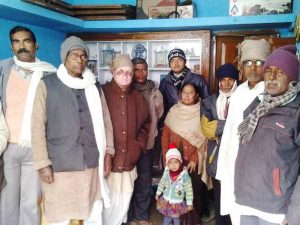 PATNA: The Bind community has around 18 lakh voters in Bihar, but they have no place in the politics of the state. They have only been used as a vote bank. This issue was raised at the meeting of the Bihar Bind Vikas Mahasangh here on 1 January. The meeting was held at the home of Indu Devi, president of the Mahasangh, in the Kurji locality. On the occasion, Indu Devi said that the Mahasangh was established in 2008 with the objective of securing justice for the community.

Even 66 years after Independence, Binds have not got their social, economic and political rights. Ram Shankar Mahto Bind, secretary of the Mahasangh, said that earlier, the Bind community was associated with the Bihar Pradesh Nishad Mahasangh, but could never get any political benefit, and that was why a separate Bind Mahasangh was founded. Treasurer Shiv Ratan Bind said that before the Lok Sabha polls, the organisation would approach all political parties, and their votes would go to the party that fielded Bind candidates. On this occasion, Ramvalli Bind, Mahanand Prasad Bind, Vanshraj Singh Bind, Rajendra Mahto Bind, Suresh Mahto Bind, Uma Shankar Arya, Ashok Kumar and Meena Devi were also present.