The growing circulation of local editions of newspapers ensures that even small incidents come into the public domain. At the same time, it also means that incidents of repression of and atrocities on the deprived sections of society become known only in a limited area. This is in not at all in the interest of the repressed communities.  On 31 August 2005 a Dalit inhabitation was attacked at Gohana in Haryana. For many days before the incident, the local newspapers had been carrying stories warning of such an attack at the behest of khap  panchayats. Obviously, there is a need to study the role of the media in incidents of attacks on Dalits.

Two distinct trends were clearly visible in the media coverage of the Gohana incident. The way NDTV India covered the incident was a reflection of the true heritage of Indian journalism. The channel ensured that its audience spread all over the country was made aware of the attack. The channel talked to Sanjay Kothari, a top state government official. What the officer said exposed his anti-Dalit mindset.  Kothari was repeatedly describing the mansions that were burnt down in the Valmiki locality as huts. Clearly, he believed that Dalits live only in huts. Not only that, he was insisting that the number of houses that were set ablaze was only 5-7. 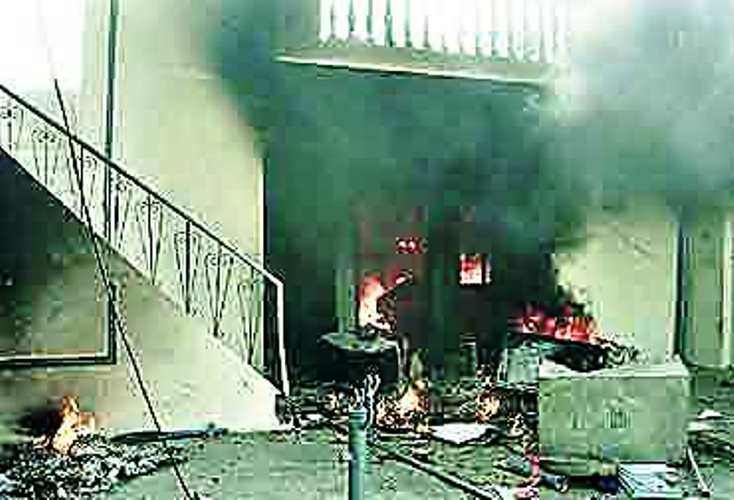 If a TV news channel performs its duties objectively, it can and does expose the people and the forces that help the assailants in different ways. NDTV India played a salutary role in spreading the news in a wider area, where the local editions of newspapers did not have reach. Had the apprehensions being expressed by the local media before the incident breached the confines of its limited reach, the centre and the state could have tried to prevent the attack on the houses of the Valmiki community. On many an occasion, the decisions of caste panchayats are in direct confrontation with the constitutional structure of the country.

On the other hand, Zee News and Star News beamed live the proceedings of the panchayat convened by the prosperous Jats the next day. They sent two correspondents each from Delhi to the place of the incident. Zee News used aggressive language against Dalits and panchayats for hours. The channel portrayed the  Dalit locality in Gohana as if it were the ravines of Chambal and made fun of Dalit names. This was a rather unique incident in the history of Indian media. And it was not merely the part of the strategy to grab a bigger share of the markets. It was the manifestation of the social composition of the media. The number of Dalits and OBCs in the media is very limited. The owner of Zee News comes from Haryana. ‘Zee News and news from Haryana’ can be the subject-matter of an independent research. The fourth estate carried live the proceedings of the panchayat where Dalits were being abused and where the assailants were very much present.

While reporting incidents like Gohana, media persons do not remain objective professionals. Their socio-political background colours their coverage. In a press conference called by the police, a woman reporter said that she was threatened by the Dalits. This is an example of how an individual is depicted as representative of a social community or group. If an upper-caste person threatens someone, is it described as a threat by the upper castes? When a journalist attends a press conference, why is he or she so keen to link a criminal assault with a personal incident? And why is this done especially when the issue at hand is connected with caste?

When our team held a press conference at Panipat after a study of the 31 August attack in Gohana, similar questions were lobbed at the team. These questions came from the supporters of the assailants and from casteists. The team was asked that whether it probed the incidents, in reaction to which the Gohana incident took place. The same ‘reaction’ excuse was used by Hindutvawadi Narendra Modi and Congress’ Rajiv Gandhi when Muslims were attacked in Gujarat and Sikhs in Delhi and elsewhere. Why and how was a section of the media, the assailants and the administration speaking with the same voice on the Gohana incident?

After a murder, are the members of the caste of the deceased allowed to attack the members of the caste of the murderer? Where is the need for law and the Constitution then? The team was told that objectivity demanded that it should have talked to the ‘other party’ too. The team responded by asking who the other party was? We had only studied the incident of 31 August. In newspapers, crime stories are generally based on the police version. Why this principle is not applied there? Then, was any group or person ready to accept the responsibility for the Gohana attack? But overall, the Gohana incident evoked a strong reaction in newspapers.

News about meetings of caste panchayats after the murder of Baljeet were being published in the local editions of newspapers but the administration did not wake up. No preventive arrests were made. The state government behaved as if it was waiting for the 31 August attack to happen. It perhaps thought that its role would come only post-attack. The chain of events also indicates how the local units of political parties are not playing the role they are expected to play. Those who attended the panchayat meetings after 28 August were party to the attack but the administration registered cases only against 23 persons. From what the top state government functionary Sanjay Kothari told NDTV India, it was clear that roadblocks were placed in the way of the district administration taking effective preventive action.

Just as communal riots are provoked and orchestrated by certain forces, so also with attacks on Dalits. What role the media plays in this deserves to be studied and analyzed. What is published about the incidents of atrocities against Dalits in Haryana is only a small percentage of the actual incidents. Whatever is published in the local media is brushed aside by the political and administrative set-up. There is an obvious need to ensure that news of Dalit atrocities and build up of communal tension do not remain confined to a small area. Such situations require positive outside  action. Had the details of what was happening in Gohana reached the wider media, perhaps the Gohana attack could have been prevented.