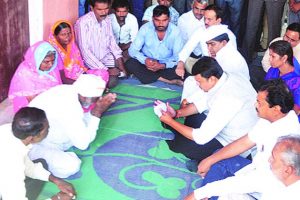 MUMBAI: The BJP can possibly do without Ramdas Athawale in either Narendra Modi’s or Devendra Fadnavis’ cabinet but the party cannot afford to cold-shoulder the Dalit voters. So the Maharashtra chief minister has been going out of his way to shed the image of an urban upper-caste party. Not long after he was sworn in as chief minister, Fadnavis, a Brahmin himself, paid a surprise visit to the village in Ahmednagar where three members of a Jadhav family were found brutally murdered and assured them that the killers would be caught and brought to justice. Then, in December, for the first time ever, the death anniversary of Babasaheb Ambedkar was observed with state honours. He also announced that the building of an Ambedkar memorial at the site of the defunct Indu textile mill in central Mumbai’s Prabhadevi area would go ahead as promised in the BJP manifesto. The state government has obtained the approval of the Union Ministry of Textiles, which owns the 12-acre site, for the project .