As Narendra Modi was close to being nominated the prime ministerial candidate, another Modi, Sushil Modi, flaunted Modi’s backward-caste origins. During in a public rally in Delhi, in January, Narendra Modi himself brandished his caste. At one level it is surprising that Modi is showcasing his caste, as the aim of the RSS, whose trained ‘swayamsevak’ (volunteer) he continues to be, is to forge a monolithic Hindu identity, papering over the caste differences and underplaying its inherent hierarchy.

Hindutva, the RSS’ politics, is essentially an ideology based on the caste pyramid, where the different castes have a well-defined place. The caste system gets its strength through subordinating the Dalit-bahujans. The dominated castes and Dalits-OBCs’ assuming Hindu identity, over and above their caste identity, is the fulcrum of strength of Hindutva politics. 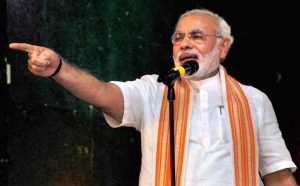 Caste is the major phenomenon with which Hindutva politics has had to engage. The beginning of RSS was more as a reaction to low castes coming up in society. In the 1920s, when the Dalits launched a nonbrahmanical movement to fight against the landlord-Brahmin combine, the upper castes came forward to lay the foundation of the RSS. This formation was aiming at creating a “Hindu nation”, in contrast to the agenda of Ambedkar, who was talking of caste annihilation and was conceptualizing the concept of social justice within the framework of rising Indian nationalism. The RSS was also opposed to the national movement, which recognized the need for the transformation of the caste hierarchy towards the values of equality. At this point of time the Hindutva ideologues like Golwalkar upheld the Hindu holy books which had caste equations ingrained in them. Overlooking the cruelty of the caste system, these ideologues glorified it as the basis and strength of Hindu society. With Independence and the birth of the Indian Constitution, the march of Dalits towards equality took the next step aided by the affirmative action provided by the Indian Constitution. They did start the journey for their own share of sky.

The changes in the social scenario by the 1980s led to a situation whereby the upper castes felt that this “undeserving” section was being treated like sons-in-law of the governments in matters of education and jobs. They felt that their “deserving” children were not able to get their due share of admissions and jobs. The result was the anti-Dalit violence in Ahmedabad in the 1980s. Later the anti-OBC violence in the mid-1980s, opposing the promotion of OBCs in jobs, was witnessed. With the recommendations of the Mandal Commission being implemented in the 1990s, the discomfort of the upper castes was articulated by RSS progeny, who for electoral compulsions did not formally oppose the Mandal mandate but diverted social attention by enhancing the mobilization for the Ram temple in a big way.

Meanwhile the RSS planned for social engineering by which the Dalits were co-opted into Hindutva politics and at times put in the forefront, such as during the Babri Masjid demolition and during the anti-Muslim violence in Gujarat. The anti-minority violence plays the role of bringing religious identity to the fore, making the Dalits’ ‘Hindu identity’ overshadow their caste identity. After every case of anti-minority violence, the Hindu identity became dominant for Dalits. The recent Muzaffarnagar violence is a good example of this phenomenon. Here, the Jat-Muslim bridges were broken through this violence and more so by transforming the Jat identity to a ‘Hindu’ identity, by showing them the fear of Muslims. Earlier, using social engineering, through the Babri Masjid demolition and other related tactics, OBC leaders such as Uma Bharati, Kalyan Singh and Vinay Katiyar have been brought to the forefront of the RSS politics. With such social engineering one can see the section of Dalits veering towards divisive politics.

At another level there is the ploy of floating organizations like the Samajik Samrasta Manch (social assimilation platform), which talks of caste harmony while retaining caste inequality. This idea is in total contrast to the idea of Ambedkar, for whom caste annihilation had to be the central agenda of Dalit politics. While Ambedkar drew attention to the painful plight of Dalits and fought for justice for them, the RSS has subtly and openly opposed the affirmative action for Dalits and never raised its voice against atrocities on them. Communal politics uses a clever ploy. At one level it opposes all affirmative action for the dominated castes, at another level it co-opts them and at yet another level it talks of harmony between different castes.

There is a twin-track strategy as far as the caste question is concerned. On one side it aims to project Modi’s backward-caste identity, and this is for an electoral appeal. At another level it also aims to bring in overarching Hindu identity over and above caste identity while retaining the caste pyramid. The overarching Hindu identity is constructed through communal violence, through projecting the fear of the ‘other’ – the Muslim or Christian threatening ‘we the Hindus’. At an ideological level it propagates the ‘Integral Humanism’ propounded by Deendayal Upadhyay. This concept of Integral Humanism says Hindus believe that different varnas have come from same Virat Purush (Grand Man). From his mouth came Brahmins, from his arms Khsatriyas, from his thighs Vaishyas and from his feet the Shudras. It means that all these varnas and castes are complementary to each other.

Modi took this concept to a spiritual level in his recent book Karmayoga, published by the state information department. In this book, Modi says, “Scavenging must have been a spiritual experience for the Valmiki caste. At some point of time, somebody must have got the enlightenment that it is their [Valmikis’] duty to work for the happiness of the entire society and the gods; that they have to do this job bestowed upon them by gods; and that this job of cleaning-up should continue as an internal spiritual activity for centuries. This should have continued generation after generation. It is impossible to believe that their ancestors did not have the choice of adopting any other work or business.” This spiritual experience is reserved for the Valmikis, a sub-caste among Dalits, which has been condemned to scavenging jobs for centuries. The functions of the caste are also being glorified and propagated by many a godman.

There is no linear relationship between this politics and its strategies. This politics, Hindutva, wants to uphold the caste hierarchy in a subtle way and adopts different tactics in dealing with the caste question. Undoubtedly, the biggest ‘success’ of this politics would be for the non–upper-castes to become assertive as ‘Hindus’ through ideological indoctrination and become icons of Hindutva politics. Modi being a Hindutva icon and an OBC is a big leap for the Hindutva agenda of upholding the caste system and at the same time making stronger forays into the electoral battlefield.