The biennial election for five Rajya Sabha seats in Bihar has bared many an ill-kept secret of the state’s politics. The BJP has been unable to shed its love for the upper castes. The JDU, by giving tickets to two MBCs, has indicated that it would continue to use the MBC card to further its politics. By supporting the candidature of senior journalist Harivansh, Chief Minister Nitish Kumar has killed many birds with one stone. Harivansh Rai has the image of being a pro-Nitish Kumar journalist. Simultaneously with the JDU,

Khabar had also launched a signature campaign demanding the status of a special state for Bihar. In those days, it was often said in media circles that Prabhat Khabar was a mouthpiece of the JDU.

The JDU is feeling increasingly insecure about its MBC vote bank because it fears that the BJP may play the MBC card in the name of Narendra Modi. It doesn’t want to share its MBC constituency with any other party. That is why it decided to field Ramnath Thakur and Kahkashan Parveen in the Rajya Sabha polls. One factor that went in favour of Ramnath Thakur was that he happens to be the son of Karpoori Thakur. By fielding Kahkashan Parveen and sidelining Kujra Dr Aizaz Ali, the party seems to be trying to strengthen its base in this community. Ali Anwar is already in the Rajya Sabha, while Salim Parvez is deputy chairperson of the Legislative Council. Both hail from the Ansari community. Nitish Kumar had not been able to give adequate representation to Dhunia, a big Pasmanda community. By fielding Kahkashan Parveen, Nitish has tried to win over both the women as well as the Pasmandas.

The BJP is well aware of the rebellious temperament of CP Thakur and the Bhumihars. CP Thakur had raised the banner of revolt earlier, forcing the party to send his son to the Legislative Council. After parting ways with the JDU, the BJP’s dependence on the Bhumihars has only increased. The Bhumihars turning their backs on the party would cost the BJP dear. Two BJP MPs from the state are Kayasthas from Patna – Ravishankar Prasad, deputy leader of the party contingent in the Rajya Sabha, and Shatrughan Sinha, who is a member of the Lok Sabha. By deciding to support another Kayastha from Patna – Ravindra Kishore Sinha – for the Rajya Sabha, the BJP has indicated that Kayasthas continue to be on its list of favoured communities. The party has thus tried to win over both Bhumihars as well as Kayasthas.

Those who have been denied Rajya Sabha tickets by the JDU include Shivanand Tiwari, NK Singh and Sabir Ali. They were offered Lok Sabha tickets but, apparently, all three have refused. Observers of the political scene say that by sending the sons of Karpoori Thakur and Ramanand Tiwari – both pillars of the Socialist movement in the State – to the Upper House, Nitish Kumar has demonstrated his commitment to the socialist political stream.

The long and short of all this is that while selecting candidates for the Rajya Sabha, both the JDU and the BJP have taken care to appease the communities which form their support base and have started penning the script for the Lok Sabha elections. The exercise has its limitations, though it is full of promise too. 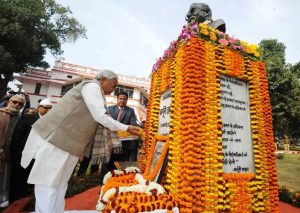 Former chief minister Karpoori Thakur seems to have become an indispensable element in the contemporary politics of Bihar. The Most Backward Classes (MBC) politics of Bihar has been woven around Karpoori Thakur. One of the pillars of the socialist movement, Karpoori Thakur has become synonymous with the political ambitions of the MBCs, who form 30 per cent of the state’s population. This is the reason why almost every party worth its salt organized functions right from the capital Patna to the smallest of towns from 24 through 26 January to mark his 90th birth anniversary. Among others, the ruling JDU, the RJD and the BJP celebrated his birth anniversary, expressed their faith in his policies and programmes and solemnly promised to work for the welfare of the MBCs.

The occasion was of special importance for the JDU. The party announced the names of its Rajya Sabha candidates on Karpoori Jayanti. They included his son and former minister Ramnath Thakur and Kahkansha Parveen. Both are MBCs. By sending two MBCs to the Rajya Sabha, the JDU tried to bolster its image as a pro-MBC party dedicated to the ideals of  Karpoori Thakur.

MBC politics in the name of Karpoori Thakur is at its zenith. Karpoori Thakur was described as ‘Jan Nayak’ (people’s hero). But now he seems to have become ‘Vote Nayak’ (vote winner). By playing the politics of numerically weak MBCs, Nitish Kumar has managed to strike deep roots. As for the BJP, for quite a long time, MBCs did not seem to exist for it. But with its alliance with the JDU, it too got an opportunity to get a foothold among the MBCs. In the changed political equations, MBCs have become the most important factor for the BJP. Probably, that was why the BJP national chief Rajnath Singh travelled to Patna to join the BJP-sponsored Karpoori anniversary celebrations. It is then quite obvious that all parties are now eyeing the support base created in the name of Karpoori Thakur. What remains to be seen is whether and how MBCs themselves benefit from this political exercise.