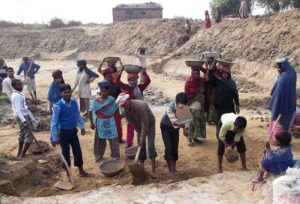 DANAPUR (Bihar): The Danapur Vikas Samiti celebrated its silver jubilee function at Pragati Bhavan here. On this occasion, Bihar Vidhan Sabha Speaker Uday Narayan Chaudhary said that earlier the governments used to talk about ‘Roti, Kapda Aur Makan’ but now, health and education had been added to it. He said that the importance of labourers in the building of the nation and the state could not be underestimated. Earlier, Chaudhary inaugurated the Pragati Bhavan. On this occasion, Dr Deepak Prasad, MD of Bihar State Food Corporation, said that Food Security Act had been implemented in the State with effect from February 1. Praveen Kumar, regional manager of Oxfam India, said that those who had turned the battle for land into a people’s movement should not rest till the battle for land and against hunger reached its logical conclusion. MP Ramkripal Yadav, Sudha Verghese, Pradeep Priyadarshi and Umesh Kumar attended the event.