There is nothing surprising about the fierce controversy currently raging over the new Navayana edition of Ambedkar’s booklet Annihilation of Caste (AoC) in the cyberspace, including blogs and Facebook, as well as in magazines and newspapers. The introduction of the book has been penned by celebrity writer Arundhati Roy. If the intervention of the high-profile writer in the discourse is the fire, the Dalit intellectuals, by questioning her motives, are adding fuel to it. Needless to say, the more controversial the book becomes, the more it will sell, sending the cash registers of the publisher jingling. 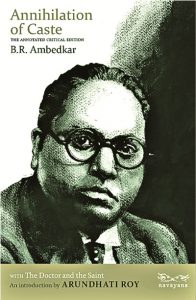 A sermon running into 200 pages as introduction to a 60-page booklet cannot be justified by any stretch of the imagination. This is akin to adding 200 gm alloy to 60 gm pure gold. Arundhati has also written many books. Is the preface of any of her books thrice the length of the book proper? There is a colloquial saying, “Ek Aane Ka Murga, Nau Aane Ka Masala” (One anna chicken, nine anna spices). The blind supporters of Arundhati are dishing out the clichéd attack-on-freedom-of-expression argument to counter the Dalit-bahujan opposition to her piece. My brother, you are misconstruing the democratic right of informed criticism as an attack on the freedom of expression! What is objectionable about any social organization or body of intellectuals saying that they don’t agree with what someone has written or said?

Arundhati has led many an agitation demanding that the rights of tribals be protected and that the persons displaced by dams be given their due. Doesn’t she have the moral responsibility of not making irresponsible statements? Yes, Ambedkar had indeed burnt the Manusmiriti. But he was not burning a book. He was merely registering his symbolic protest to an inhuman set of values. How can you term any act wrong without giving due consideration to the objectives behind it?

In her bulky introduction, Arundhati writes that, “coincidentally”, Ambedkar could find no place in Richard Attenborough’s Gandhi. But she puts this only as a fact. She does not criticize it. She finds it only “coincidental”, though she does give us a handle to criticize the lapse by referring to the fact that the film was partly funded by the Government of India. Just think, what sort of film is this in which there is not a single scene of Gandhi and Ambedkar coming face-to-face? But she doesn’t want to waste even a few words of her 200-page piece on criticizing this major omission.

She has written a lot about Gandhi, trying to prove that he stood taller than Babasaheb. It seems that her primary objective is to draw commercial mileage from the global image of Gandhi. Saffron journalist Arun Shourie had deliberately tried to belittle Ambedkar by writing Worshipping False Gods (1997). Arundhati also seems to be doing exactly that. And that is why, in the written explanation she has proffered in the wake of the controversy, she seems to be on the defensive. Like typical Savarna and Leftist intellectuals, she brands the Bahujan intellectuals criticizing her as incompetent, incapable, aggressive and even terrorists. Ambedkar’s book is a reproduction of the speech he was to deliver at an event organised by Arya Samaji Jat-pat Todak Mandal in 1936. When the organizers read his speech, their commitment to breaking the shackles of caste fizzled out. They could not digest Ambedkar’s sharp, no-holds-barred assault on the caste system. As a via media, it was suggested that Ambedkar tone down his speech but Ambedkar was not ready to drop or add even a word favouring the perpetuation of the caste system.

It should be remembered that it was only after the non-Bahujans stopped considering literature untouchable – even if unwillingly, grudgingly or out of sympathy – and started writing about Dalit literature that their fortunes changed. Their interaction with society increased and their canvas widened. But don’t think that they took up this ‘philanthropic’ work, which was against their interests, for nothing. Just see, how the Dwijs are milking government institutions, colleges, universities and research bodies in the name of research, study and discourse on Dalits. It is they who are skimming the cream. Even in this field, the leadership is in the hands of the Dwijs. The OBCs are only the followers. There are inherent dangers in the Dwijs being in leading positions. They would like to make the literature toothless by depriving it of its sharpness, mettle, orientation and exclusiveness. History tells us how the progressive, humanistic and intellectual elements of Kabir Panth and Buddhism and Jainism were effaced by the infiltrator Dwijs. 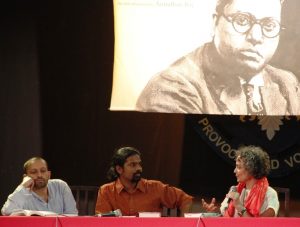 Just out of curiosity, this writer scanned the Patna editions of some newspapers of 15 April 2014 for news relating to celebrations of Ambedkar’s birth anniversary. The outcome was revealing. It seemed that only sociopolitical organizations of Bahujans celebrated Ambedkar Jayanti. There was no news item regarding the celebration of Ambedkar Jayanti by members of the Dwij castes and their organizations. On the other hand, the Dwijs celebrate the birth anniversaries of not only Gandhi but also non-Dwij Sardar Patel with great fanfare.

The Hindi newspapers often greet the minority community members on their festivals as representatives of Hindus or the majority community. The attitude of journalists reporting on the Arundhati Roy controversy is similar. They present Roy’s views as their own while those differing with her are described as “thinkers”. It is clear from the style of their writing that they consider the alternative viewpoint as the ‘other view’. In other words, there is an undercurrent of familiarity for Arundhati’s arguments and an undertone of hostility towards those with opposing arguments.

A related issue here is, who has the right to speak and write on Bahujans – only those who have experienced the pain or even those who are sensitive to and sympathize with their pain? There can be no clear-cut answer to this question. The importance of personal experience can never be overemphasized. At the same time, expression of sympathy cannot be wished away either. In literature, the capacity to step into someone else’s shoes is of paramount importance. Most literature has been written on the basis of experience or knowledge obtained from other persons or any other source. Diaries, autobiographies, travelogues and reportage are based on one’s own experience and on the reality. On the other hand, poetry, stories and novels are a mixture of the experience of oneself as well as of others, information obtained verbally or through the written word and imagination.

Literature based on reality is being written but its credibility is low. That is because from the mass of our experience, we include or omit things based on our convenience and our leanings. We distort facts, too. Thus, basically, literature is based on imagination. The biggest advantage of fictional writing is that no one can seek any evidence for the details mentioned in it. On the other hand, writings based on experience or reality can be questioned. If you say anything that is unpalatable or libelous against someone, you may be in for trouble. Evidences can be sought, you can get entangled in court cases and your relations may turn sour.

Incidentally, just like the run-of-the-mill Dwij and Leftist anti-Dalit writers, Arundhati has raised the petty objection that if non-Dalits cannot write about Dalits then how can any non-Mahar Dalit write on Ambedkar, who was a Mahar. Clearly, this famous writer harbours the same biases about Dalit literature that are harboured by the ordinary Dwij writers. These writers and their diehard supporters can never concede that there can be any shortcoming in what the Dwijs are writing about Dalits and that their works are anything short of the absolute truth. Moreover, they are unwilling to give non-Dalits the right to pick holes in their writings. The same mindset was at the root of the ideological clash between Gandhi and Ambedkar.

If Dalit literature gives more importance to self-experience and insists that it is its axis, its inner soul, while sympathy forms its periphery and integral part of it, why should anyone have any objection to it?