When a temple in Madhubani was thoroughly washed after a visit by Bihar Chief Minister Jeetanram Manjhi, some said that the chief minister had become a victim of the system of untouchability. In a related development, BSP national general secretary Swami Prasad Maurya has stirred up a hornet’s nest by saying that Gauri-Ganesh should not be worshipped in marriages. His statement got wide coverage in the newspapers. But soon afterwards, BSP supremo Mayawati disassociated herself from what she termed Maurya’s personal opinion. 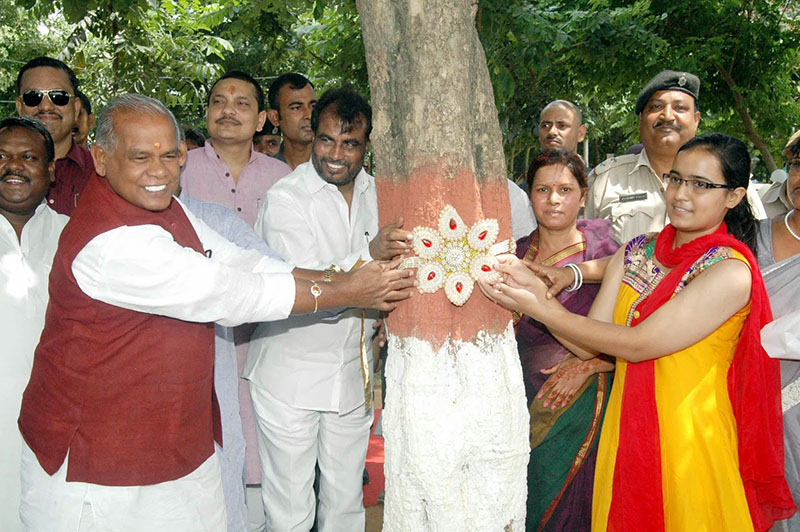 The tradition of opposition to religious ritualism neither begins nor ends here. Indian society has seen not only debates but also movements on this issue. Such movements took place before Ambedkar and they continued after Periyar. Mayawati may be trying to wriggle out of the issue, but this tradition played a decisive role in her forming a government in Uttar Pradesh,.

Now, the question is why are those who raised these questions trying to skirt them. Is this some sort of political disorientation or a part of the process of assimilation? Or, do they think it is better to get assimilated?

Politics based on caste identity always stands the risk of getting absorbed in the religion. It is not a coincidence that those who raised the slogans of ‘Tilak, tarazu aur talwar, inko maro jute chaar’ are now talking of ‘Hathi nahi Ganesh hai, Brahma, Vishnu, Mahesh hai’ (It is not elephant, it is Ganesh; it is Brahma, Vishnu and Mahesh). This is not merely about being drawn to Hindu gods and goddesses. It is about falling for soft Hindutva. Amidst the chantings of ‘Hathi aage badta jayega, Brahman shankh bajayega’ (The elephant will march ahead, the Brahmin will blow the couch shell), the ‘hathi’ actually entered the same Manuwadi enclosure from where it had set out to attain freedom. This was a Hindutva strategy of turning identity-based caste politics into the handmaiden of soft Hindutva.

In these circumstances, an analysis of BSP leader Swami Prasad Maurya’s statement at Karpoori Thakur Bhagidari Mahasammelan (Karpoori Thakur partnership convention) becomes essential. Let us try to understand what sort of partnership he is talking about. He said that the Manuwadi system used gobar (cow dung) and Ganesh to measure the intellect and understanding of the Shudras. What is the use of being a doctor or engineer if one is unable to tell whether a piece of dried cow dung can bless us like God? Whether it can eat beetle nuts and pan? Whether it can accept the money offered to it? Whether a stone idol can drink milk? The Manuwadi system made the Shudras do all this and reached the conclusion that they can be made to do anything. Maurya said that today, only discussing ideology won’t work; it is necessary to give it a practical shape, to imbibe it in our daily lives.

For us, it should not be important if a temple is purified after a Dalit visits it. In fact, this issue is not even limited to Dalits and OBCs. It is a question of nation-building, which is impossible without a scientific temper.

Dalit politics, which was based on opposition to Manuwadi-Brahminvadi system, had helped its supporters recognize the divisive ideology that differentiated man from man. As that politics having lost its way, it is not surprising that the society is following suit. The present protagonists of Dalit politics have realized that only ideological pronouncements won’t solve the problem; a practical approach will be needed. Unless the people who have drifted away from Dalit politics and joined the ranks of those who ‘feed milk to stones’ do not return to its fold, its very existence would be under threat. Dalit politics faces a real threat from the disillusioned middle class that has emerged from the Dalit community. In the Lok Sabha elections, this middle class sided with Modi and helped turn the political atmosphere in his favour. The same is true of OBCs. The emerging middle class of the OBCs is also under the sway of the BJP. Hindutva politics draws this class towards it because it promises to solve issues related to its identity. Those who had jumped on the Maya-Mulayam bandwagon not because of any ideological preferences but on the question of identity – why will they remain there? Why won’t they become fellow travellers with the BJP?

As for Mayawati, she had surrendered before the BJP on the issue of Periyar’s statue. In 2002, the BSP government, ruling Uttar Pradesh with the support of the BJP, decided to erect a statue of Periyar at Lucknow’s Ambedkar Park. The BJP, Bajrang Dal and other Hindutva organizations opposed it, and the idea was quietly dropped. For the BJP and others of its ilk, Periyar’s statue does not represent only an individual. It represents a thought, which, they feel, threatens the very existence of Indian society. It was for the same reason that these organizations had opposed a CD titled ‘Teesri Azadi’ in the year 2007.

Jeetan Ram Manjhi is complaining that even being the chief minister could not protect him from the practice of untouchability and the bias against Mahadalits prevalent in society. But a question that can be legitimately asked is why, in the first place, did he go to a temple? When Manjhi asks for introspection about the state of affairs and observes that casteism’s steely grip on society has not loosened even a bit, he should also realize that the temple he visited does not belong to the Indian Republic. It is a temple that is run according to the tenets of Manu, one of which is that Dalits are not allowed inside. There is another version of what happened: the temple was not washed after he left but before he came and that he performed the puja with proper mantras and rituals. Therefore, Manjhi should introspect as to why he went there. When he says he was treated in this manner because he is a Mahadalit, he is not wrong-just ideologically immature.