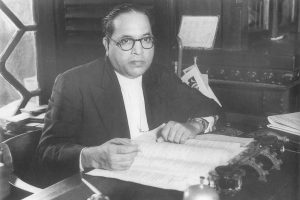 MHOW (Madhya Pradesh): Madhya Pradesh Chief Minister Shivraj Singh Chouhan has urged the Ministry of Defence to hand over the land that surrounds the Dr Bhimrao Ambedkar memorial in Mhow. The state government wants 4.52 acres of land around the memorial in Ambedkar’s birthplace and is ready to hand over an equal area of revenue land to the ministry in return. A large number of people assemble on this piece of land on 14 April, the birth anniversary of Ambedkar, every year. There is no other appropriate place for the grand memorial that the state government plans to build. The Madhya Pradesh government also plans to organize Ambedkar Mahakumbh in Mhow and Ravidas Mahakumbh in Ujjain. Many Dalit organizations have welcomed the move of the state government.