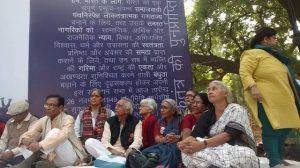 NEW DELHI: On 2 December, around 15,000 labourers from different parts of the country and activists took out a rally and held a public meeting under the banner of “Abki Baar Hamara Adhikar” (This time, our rights). A number of people’s organizations lent support to this protest against the BJP government tinkering with the MNREGA, the so-called “reforms” in the labour laws and changes in the Right to Education Act. Representatives of many people’s horganizations, including Aruna Roy, Medha Patkar and Nikhil Dey, led the protest. Annie Raja of NFIW, Kavita Krishnan of AIPWA and MPs D. Raja (CPM), Ali Anwar (JDU) and Manishankar Aiyyar (Congress) were among those who spoke at the public meeting. The people’s organizations held a workshop at the Ambedkar Bhawan, Jhandewalan, for two days (30 November-1 December) followed by the rally at JantarMantar.