It was seven in the morning. On the way back from Latehar, our team had reached a village called Gaadi. It is located in the Barwadih police station area of Jharkhand’s Latehar district, northeast of Ranchi. We saw a man in his 30s sitting on a platform. He was looking morose. When we got talking, he told us that his name was Nagendra Singh and he was a Chero tribal. There were 22 stitches on his head. These stitches were the price he had to pay for using the hand pump at a police checkpoint near the Betla sanctuary. Can a person be punished so severely in a free country for trying to get some water to drink? It was unbelievable. 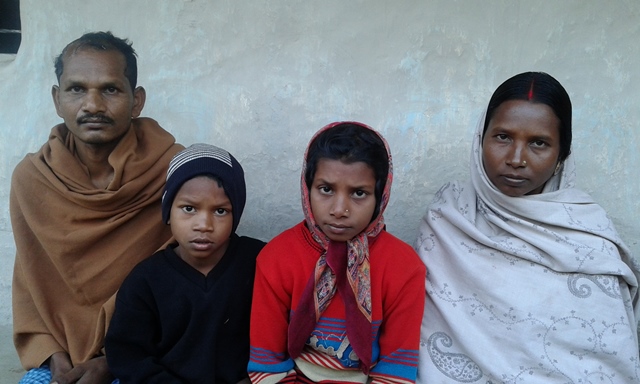 We were shocked and angry. Beyond doubt, it was a shameful and condemnable incident. We sought details from Nagendra. Initially, he was surprised. He could not believe that a group of strangers could be interested in his tale of woes. Even more so because those whom he voted for had no time to hear his problems and no sympathy for his pain and anguish. Once elected, they never made an appearance till the next polls. Nagendra was also fearful that he may have to suffer again for sharing with us what he went through. It was only after a great deal of persuasion that he opened up and revealed his harrowing tale.

Nagendra is a daily-wage labourer in the Betla sanctuary. He provides for his family – his wife Geeta, 30, daughter Durgiwati, 8, and son Shrishant, 7 – with the Rs177 he gets for a day’s work. Every year, a fair is held at the Palamu fort, which draws a large number of visitors. As Nagendra Singh had gone for work, his wife Geeta went to the fair along with their two children. After his day’s work was over, Nagendra too joined them at Palamu. In the evening, the family started back. It was around 6pm when they reached the Betla police checkpost.

Durgiwati was thirsty. When she saw the hand pump near the checkpoint, she asked her father to fetch water for her. Nagendra had barely laid his hands on the pump when a policeman, Upendra Paswan, posted at the checkpoint, started abusing him. “You are a Naxalite. Why are you drinking water from here?” he asked him. Nagendra replied, “Sir, I am not a naxalite. I am a daily-wage labourer at Betla sanctuary.” But Paswan would have none of it. He started hitting Nagendra. Soon, two other constables, Ramesh Mahto and Bindeshwari Singh, joined him, and the three of them punched and kicked Nagendra and rained lathis onto him. All the three men were dead drunk.

When Gita tried to shield her husband, she too was hit with lathis on her right hand and her back. The jawans did not spare the kids either. Nagendra was hit on his head. His skull cracked and blood began to ooze out. He fell unconscious. Gita tied his head with her sari to stop the bleeding. After some time, when Nagendra regained consciousness, they decided to resume their journey. However, the policemen did not allow them to use the main road. They somehow reached a hospital. Timely treatment saved Nagendra’s life. He got 22 stitches on his head and had to spend Rs 5,000 on the treatment.

On 2 November 2014, Nagendra reached the Barwadih police station to register a case against the three policemen. The thanedar, however, refused to file an FIR. But Nagendra was not one to give up easily. He persisted, and ultimately, the thanedar took his written application and gave him a copy, acknowledging the receipt of the complaint. A copy of the complaint with the signature of the policeman was enough for Nagendra to take his battle ahead.

The same evening, at around 4, Dhananjay Prasad, the daroga of Barwadih police station, along with armed policemen, reached Nagendra’s home. He asked Nagendra to withdraw the complaint. A crowd soon gathered there and started pressurizing him on behalf of the police. The police officer gave Nagendra Rs8,000 for his treatment and asked him to wash the blood-soaked sari. He also made Nagendra sign on a letter which said, “We have reached a compromise and we will not quarrel with each other again.”

Nagendra still appears terror-stricken but his wife Gita is brave. She has kept the blood-soaked sari safely. She wants to fight against the police atrocities. She is not ready to accept such a heavy price just for using the handpump at a police station. “What crime had we committed to be beaten like animals? she asks. “I am ready to fight against the policemen.” The Jharkhand Human Rights Movement has taken up the matter with the National Human Rights Commission. Isn’t this a shame for the world’s largest democracy?