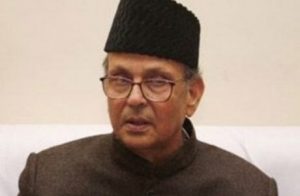 NEW DELHI: A programme was organized by the Akhil Bharatiya Asamanata Virodhi Manch in the law faculty campus of Delhi University on 27 November, the death anniversary former prime minister Vishwanath Pratap Singh, the pioneer of social justice and the messiah of the OBCs. Speaking at the function, Professor Hansraj Suman said that the battle for social justice must be fought right from the streets up to the educational institutions. Suraj Yadav said that it was because of great men like VP Singh, who used reservations as a weapon for bringing about social justice, that today, Dalit-OBC students, who once did not have even the right to study, are being appointed to top posts. President of All India Backward Students’ Forum Jitendra Yadav, Dr Pravesh, Mohammed Abu Tariq, Suraj Mandal, Satendra Thakur and others spoke at the function. Prof K.P. Singh Yadav delivered the presidential address while Ratan Kumar was the moderator. President of Law Faculty Students’ Union Brijesh Yadav led a team comprising Chandraprakash Kapoor, Upendra Kumar and Dharmaveer Yadav “Gagan” in organizing the function. Besides them, Jagdish Saurabh, Ram Ekbal, Ashish Magan and Harminder Singh were also present.