The Bharatiya Janata Party could not make substantial inroads into the Santhal Pargana region of Jharkhand in the last Lok Sabha elections and the JMM, in keeping with the tradition, succeeded in retaining the Dumka and Rajmahal constituencies. The Central Law Commission’s recent recommendation to abrogate the Santhal Pargana Act, 1855 kicked up such a furore in the area that even Prime Minister Narendra Modi was taken aback. He knew very well that the BJP would need to perform well in the Santhal Pargana region, besides Chhotanagpur, if it were to form its government in the state, and that that would be impossible without the support of Santhal tribals. Addressing election meetings at Dumka and Patna on 15 December 2014, the Prime Minister made three key statements – obviously intended at winning over the Santhals: 1. That under BJP rule, no power on Earth can take away the land from the Tribals. 2. The country cannot progress without ensuring the welfare of the Tribals. 3. BJP governments are ruling in all the states with large tribal populations. But is Modi really serious? Does he practise what he preach? Are Tribals safe in BJP-ruled states? Or does Modi make these grandiose statements just to garner votes in elections? 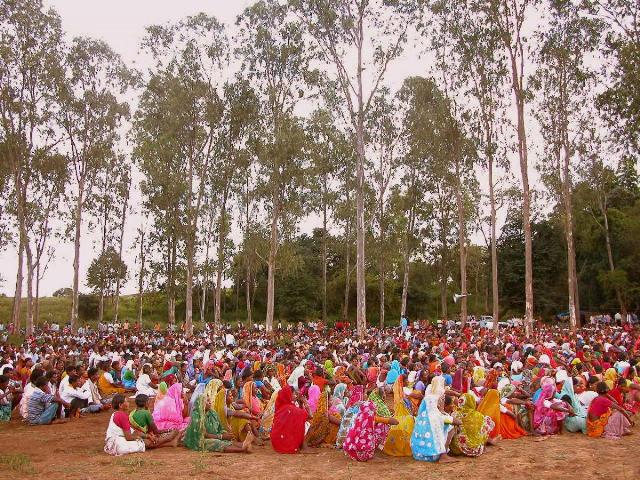 The experience so far has been that Narendra Modi and the BJP governments have done next to nothing for the welfare of the Tribals. Within days of Modi becoming prime minister, the central government decided to raise the height of the Sardar Sarovar Dam from 121.92 metres to 138.68 metres. This has been the demand of the Gujarat government for quite some time now. More than 2.5 million people of Maharashtra, Gujarat and Madhya Pradesh have been displaced by the dam. If the height of the dam is increased by 17 metres, the fields and houses of thousands of Tribals would go under water. While he was still the Gujarat chief minister, Narendra Modi had said that there was no harm in displacing 10,000 Tribals for the betterment of 400,000 farmers of Gujarat. Ironically, while on the one hand, Tribals are being displaced due to an increase in the height of Sardar Sarovar Dam, on the other, the Tribal farmers of Saurashtra are not being provided water from the dam for irrigation.

The Rs29.79 billion, 182-metre-high “Statue of Unity” of Sardar Vallabh Bhai Patel in the Sadhutekri area of Gujarat’s Narmada district is the dream project of Modi. The work on the project is underway. To prevent the flooding of the area, a wier is being built on the Narmada, and this will again displace Tribals. The land of Tribals is also being acquired for building facilities for tourists. The project has affected about 70 villages and the Tribals are opposing it. The oustees are being forced to accept compensation cheques and those who resist are being forcibly evicted by the police. Modi laid the foundation stone of the project last year, when he was the chief minister of Gujarat. According to the Tribals, the government held no consulation with them before the construction of the wier began. It was these tribal voters who brought victory to the BJP right from the municipal elections to the Lok Sabha polls but now they are being deprived of their land. What became of Modi’s promise that during BJP raj no power in the world could take away the Tribals’ land?

Over the last decade, the governments of Jharkhand, Chhattisgarh and Gujarat have signed MoUs with foreign and domestic companies for setting up more than 500 industrial projects. Agreements have been signed with the Tata, Jindal, Mittal, Essar and Bhushan groups. The seriousness of the situation can be gauged from the fact that in the Jashpur district of Chhattisgarh alone, around 500 private companies are setting up their manufacturing plants. The Tribals are being told that they should hand over their lands to these companies in return for compensation and a promise of jobs in the still-to-be-built plants. A majority of the Tribals of the area are living in fear. If they oppose these projects, they will be branded as anti-development, anti-national and Naxalites, and implicated in concocted cases. On the other hand, if they support this so-called development and give up their lands, they will be reduced to penury and their next generation will have no option but to beg on the streets.

Narendra Modi had repeatedly stated in his public meetings that the country cannot develop without ensuring the wellbeing and welfare of the tribals. On 31 August 2010, the then leader of opposition in the Rajya Sabha, Arun Jaitley, had come down heavily on then UPA government for using the Tribal Sub-Plan funds for building the infrastructure for the Commonwealth Games. But after coming to power, Jaitley is a changed man. In the Union Budget for 2013-14, he flatly refused to set aside Rs254.9 billion for tribal welfare. The Tribals had a right over this money.

If one casts a glance on the goings-on in some BJP-ruled states, the wide chasm between what the BJP preaches and what it practises will become clearer. In 2012-13, the Gujarat government, led by Narendra Modi, diverted Rs370.2 million from the Tribal Sub-Plan to JNNURM for funding infrastructural projects. (The financial allocation under Tribal Sub-Plan is meant for schemes for the welfare of Tribals.) Not only that, Rs1.15 billion from the same fund was given to municipal corporations under Swarnajayanti Mukhyamantri Shehri Vikas Yojana; Rs1.2427 billion was given to municipal committees; and Rs7 billion was used for the construction of the Sardar Sarovar Dam. Thus, the funds meant for the welfare of the Tribals were used to finance projects that led to their displacement. In the financial year 2013-14, the Gujarat government used Rs50 million from the Tribal Sub-Plan on celebrations of Swami Vivekananda’s 150th birth anniversary; Rs720 million on purchase of vehicles and equipment for government hospitals; and Rs2 billion on the construction of the Sardar Sarovar Dam. In Madhya Pradesh, Rs7.8 million was used on jails, and in Chhattisgarh, Rs20 million was spent on Special Police Officers (SPOs), who were supposedly trained to fight the Naxalites. Thus, the money meant for tribals was spent on killing them. Who authorized the BJP governments to divert the funds meant for tribal development? Is Modi talking big just to cover up this bitter truth?

Going back on promises

In his election meetings, Modi has been boasting that the BJP is in power in all the states where Tribals are in substantial numbers. But he forgets to mention that in these very states, incidents of murder, rape and torture of the Tribals are also rising. Jharkhand has been under BJP rule for nine of the 14 years of its existence. It was under BJP rule that on 2 February 2000 the police opened fire on the Tribals protesting against the construction of Koelkaro Dam near Tapkara in Khunti district. Eight people died in the firing. In Jharkhand, 557 tribals have been killed in fake encounters while 6,000 are behind bars. At least 5,000 tribals have been framed. In Chhattisgarh, where the Dr Raman Singh-led BJP government has been in power for a while, Tribals were driven out of 644 villages by the Salwa Judum, hundreds were killed in fake encounters, Tribal women raped by security personnel, 11 tribal girls molested in a government school, and 17,000 Tribals held in different jails on the charge of being naxals. At least 500 members of Baiga, Korwa and other primitive tribes were forcibly castrated.

BJP’s “Chaal, Charitra aur Chehra” (Conduct, Character and Face) are starkly different. And that is why the Tribals who have fallen into the trap of Narendra Modi’s sweet talk and false promises need to introspect. Can a tiger ever protect lambs? Will hens guard paddy? Will a butcher be the protector of goats? Will a fox save the life of a rabbit? Will lions take care of deer? Who does not know that the Narendra Modi and the BJP are friends with capitalists, traders and the self-centred urban middle class? All their friends are anti-tribal. They are eyeing the land, forests, rivers, mountains and minerals of the Tribals. Who will rule the country is now decided by capitalists, traders and the urban middle class. You can either stand with the tribals or be in power. You cannot do both. 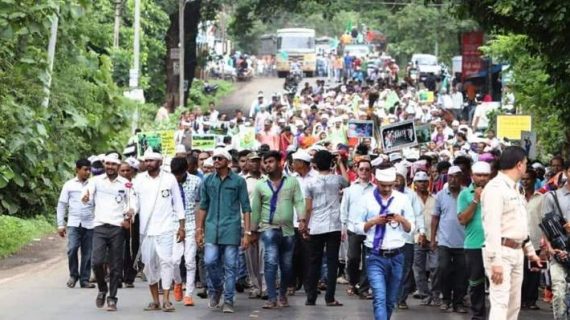 United against the ‘Statue of Unity’

As the media remained engrossed in the unveiling of the 182-metre statue of Sardar Vallabhbhai Patel, Prime Minister Narendra Modi posing next to it, and the colourful balloons floating over it, it failed to see 75,000 Tribals peacefully protesting, black balloons released not too far away from the statue and a black flag raised atop a nearby hill. Kumar Sameer reports