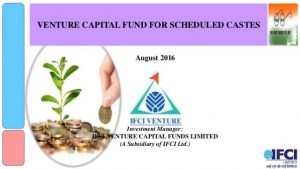 New Delhi: At long last, on January 16, the Dalit face in the Modi Cabinet and the minister of social justice and empowerment, Thawar Chand Gehlot, announced the launch of the government’s Dalit Venture Capital Fund. Besides managing the fund, IFCI would also contribute Rs 50 crores to it. Dalit entrepreneurs are not particularly excited about this decision of the BJP government. Dalit Indian Chamber of Commerce & Industry (DICCI) would have liked itself or one of its affiliates to manage such a fund.

N.K. Chandan, the president of the DICCI Delhi chapter, “welcomed” the move. “While IFCI has the experience of raising and managing venture capital funds – it has been doing so for more than six decades – DICCI has a network of 3000 members from all over the country. In other words, DICCI has the ability to verify whether the applicants for funds are actually Dalit and deserving. So it would have made more sense for the government to help the DICCI SME Fund take off rather than starting one of its own.” Nevertheless, Chandan says, Dalit entrepreneurs needed the money and it’s here now, he says.