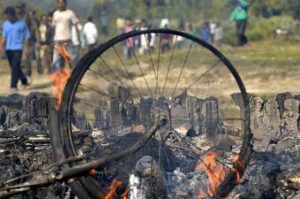 RANCHI: Condemning the Assam massacre, Jharkhand Bhasha-Sahitya-Sanskriti Akhada released a memo that said that the incident had brought shame on humanity and left a question mark over the ability of the central and the state governments to provide security to the citizens. According to the memo, the government cannot get away by saying that the site of the gruesome incident was remote and inaccessible by road, especially since more than 80 people had been killed and properties of thousands had been damaged. Who is responsible if the people, whose protection and progress is the responsibility of the state, were deprived of a basic facility like roads even 67 years after Independence? Besides illiteracy and unemployment, the memo says, depriving the original inhabitants of their traditional sources of livelihood led to the social and communal tensions. The akhada has appealed to intellectuals, writers, artistes and cultural activists to stand by the victims in their hour of crisis, and has urged the government to take immediate steps to normalize the situation and draw up a long-term policy to ensure that such incidents are not repeated.