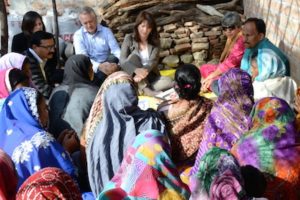 DEWAS (MP): On 13 January, Lynne Featherstone, Minister of State for Crime Prevention at the Home Office, UK Government, visited the village Pagariyaram in Sehore district. Here, the Dewas-based NGO Jan Sahas is partnering the UK Government’s Department for International Development (DFID) in the Poorest Area Civil Society Programme (PACS) for empowerment of the Dalit community. During the visit she focused on issues related to violence against women and girls. The minister had three meetings – with the liberated manual-scavenger and bonded-labour women, a group of young girls, and survivors of rape and sexual abuse.

During the meetings the women and girls shared their problems and struggle for liberation, equality and access to justice. Liberated manual-scavenger women presented products of “Dignity and Design” to the minister. “Dignity and Design” is a social enterprise developed for socio-economic rehabilitation run by the liberated manual scavengers. Survivors of rape and sexual abuse also shared the idea of barefoot lawyers to build victims as leaders for justice. The minister expressed her solidarity with the Dalit women fighting for freedom and equality. Lynne Featherstone was appointed by the British Prime Minister David Cameron as the ministerial champion for tackling violence against women and girls overseas.