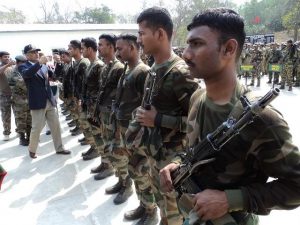 DELHI: The figures released by the Union Home Ministry for the years 2011, 2012 and 2013 show that a chunk of positions in the country’s paramilitary forces reserved for the SCs and STs have not been filled due to a lack of “eligible” candidates. About 35 to 40 per cent of the positions have been left vacant since 2011. The Central Armed Police Forces (CAPFs) and Assam Rifles (AR) conducted a special recruitment drive in 2012 and 2013 for SCs and STs. This resulted in more STs joining the paramilitary forces, filling 68 per cent of the positions in 2012 and 97 per cent in 2013. However, the drive seemed to have little impact on SCs’ recruitment in these years – 31 per cent and 37 per cent, respectively.