On 16 January, when slogans were being chanted and speeches were being made in Arwal decrying the judiciary’s attitude towards the poor of Bihar, Bhairon Rajvanshi, sitting in his village Shankar Bigha, was explaining his “compulsions” born of the fear of the musclemen and social pressure. He couldn’t gather the courage to speak the truth in the Jehanabad Sessions Court. Bhairon Rajvanshi was one of the 49 witnesses of the Shankar Bigha massacre, all of whom claimed they couldn’t recognize the accused standing before them in the dock. As the witnesses turned hostile, all the 24 accused were acquitted. Most of the accused are residents of the Dhobhi Bigha village, which neighbours Shankar Bigha. Over the last three years, this is the fifth acquittal in massacres carried out by the Ranvir Sena. What was common in all the five massacres was that the victims were Dalits, OBCs or EBCs while the accused were members of the upper castes. 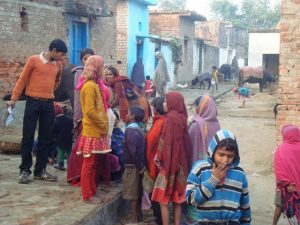 The case of Shankar Bigha massacre is a bit different from the others. In the other massacres, the accused were convicted by lower courts and subsequently let off by the Patna High Court. However, in this case, the trial court itself acquitted all the 24 accused citing lack of evidence. The lower-court judgment came on 13 January, almost 16 years after the incident.

On the night of 25 January 1999, goons of the Ranvir Sena attacked Shankar Bigha and mercilessly killed 23 people, including seven children and five women. The victims belonged to the Paswan, Chamar, Dusadh and Rajwar castes. Bhairon Rajvanshi told the media that he had gone back on his statement as “the administration did not provide any security to us and we were fearful of a repeat of the massacre”. Seven members of Bhairon’s family were killed in the massacre. The villagers say that during the trial, he had to travel to the court alone. Sometimes, the accused arranged for his transport.

Compromise is at the root

Those committed to democracy, human rights and equality have reacted strongly to the acquittals, which are being seen as an outcome of the anti-poor attitude of the police, the administration and the judiciary. There may be some truth in this claim, but it is not the complete truth. The acquittals tell the tragic tale of a failed revolution, degrading into unscrupulous compromise.

No one will officially confirm it, but it is a fact that many people associated with the Ranvir Sena and the CPI-ML have worked out compromises at the local level in many disputes and court cases in Bhojpur and Jehanabad districts. An indication to this effect was given in the pamphlet issued by the central committee of CPI-ML (Liberation) after the Bathani Tola massacre. The pamphlet said, “We stand for peace. Keeping in mind the wishes of the peace-loving people, we have initiated the process of establishment of peace. We had started peace talks during the function organized by the ‘Kisan Sabha’ at Bihta to celebrate the birth anniversary of Swami Sahjanand Saraswati. The talks were positive. We expected a positive response from the Ranvir Sena. Thereafter, through a common friend who was mediating, we sent a message to the Ranvir Sena to do what we were doing. Their reaction was quite disappointing. Thus our efforts to establish peace failed. In June 1996, we relaunched the peace campaign by holding dozens of people’s meetings. Soon, the disputes between our men and those of the Ranvir Sena in five villages were settled.”

For a deeper understanding of this phenomenon, we will have to take a slight detour through the present sociopolitical landscape of what were once the “disturbed areas” (in the language of the police) of Bihar. That will help us grasp the compulsions of the victims of Shankar Bigha and the real import of the judgment in the case. Today, in these areas, investment in agriculture has gone up, changing the production relations in the farm sector. Big money has found its way into the villages under various government schemes through corrupt middlemen and has become the source of income for many. They are making money without doing anything. The money floating around is affecting life in the villages. Aggression over issues relating to land and labour has become a thing of the past. Even the “revolutionary forces”, which used parliamentary and non-parliamentary means to wage a struggle on these issues, now have a different agenda. Today, their emphasis is on corruption in MNREGA, irregularities in PDS and improper distribution of houses under the Indira Aawas Yojana. The reactionary Ranvir Sena is nowhere to be seen. It was the product of a particular era and it was destined for the dustbin of history – where it now lies. Brahmeshwar ‘Mukhiya’ Singh, the chief of the Ranvir Sena, was killed due to rivalries between different Bhumihar groups and the internecine battle.

But at the same time, atrocities on Dalits have risen even in those areas of Bihar where some degree of social balance had been struck owing to the activities of the CPI-ML (Liberation), CPI-ML (Unity) and MCC (now CPI-Maoist). What is the situation in Bhojpur today? There were riots in Sahaar recently. In October 2014, a criminal, who was associated with Ranvir Sena, gang-raped six Mahadalit girls at Kurmuri in Sikarhata. According to official figures, 11,000 cases of atrocities on Dalits were registered in Bihar in 2014. This means that atrocities on Dalits are rising. Those who once fought for change are now fighting for victory in elections and the courts do not seem to be on the side of the poor. These three factors form a vicious circle, being the cause and effect of one another. Look at them as a whole and you will realize why the witnesses of Shankar Bigha massacre turned hostile, why the administration could not gain their confidence and also what the acquittal of the accused means.

Criminals and politics
More than the police and the administration, those who left the victims of Shankar Bigha to their fate are responsible for what ultimately happened. They cannot run away from their responsibility. Immediately after the incident, everyone tried to gain political mileage out of the incident but soon, everyone had forgotten about it. Rabri Devi was the chief minister at the time of the massacre. Lalu and Rabri had promised a speedy trial in the case. The trial lasted 16 years. At that time, Nitish Kumar, who was in the Samata party, had demanded imposition of President’s rule. His government was in power when the case was being tried. All 49 prosecution witnesses turned hostile. By welcoming the acquittals of the accused of Bathani Tola massacre, BJP had already exposed its own caste/class character.

Before pointing fingers at courts and the police administration, shouldn’t the bearers of the red flag be asked, “Comrade, where were you when the poor, Dalits and Backwards of Shankar Bigha claimed they couldn’t recognize the murderers of their kin, their sons and daughters? Was it not your responsibility to assure them security? What happened to the slogans you chanted after the incident? When the victims were left to fend for themselves, what option did they have except to forget what happened and move on?” The sealed lips of the victims of Shankar Bigha massacre show what happens when a fight for justice or liberation loses its way or is abandoned. Given the complex social, caste equations of Bihar, why and how did they presume that the government and the local administration would provide security to the witnesses? Was it not the responsibility of the organizations that were at the forefront of the battle for change to provide security to the witnesses? Maybe, sometime, someone will ask these questions.

However, the questions that need to be asked today are: Who murdered the 23 people on the night of 25 January 1999? Where did they come from and where did they go? Were they from this Earth or had landed from some other planet? If they were from this Earth, why could the police and the judicial system not bring them to book? If the residents of Dhobhi Bigha were innocent and were framed due to political reasons (as they said in their statements before the court), then where are the real murderers? Will their names ever be known? It is necessary to mount pressure for answers to these questions because the latest court verdict can lead to two equally dangerous results. On the one hand, it can instil terror in the hearts of those fighting for justice and liberation and on the other, it can encourage the feudal elements of Bhojpur and Jehanabad – both infamous for casteist atrocities – to go back to their old ways.

Whose side is the judiciary on?

What happened in Shankar Bigha

Let’s recapitulate how the events unfolded on the night of 25 January 1999. This village in Arwal (earlier Jehanabad) district is about 8km from the Laxmanpur Bathe village (where, on the night of 1 December 1997, the Ranvir Sena had slain 62 people). Most of the residents of Shankar Bigha are Dalits or OBCs. The village is surrounded by Bhumihar-dominated villages. The residents of the village had no major dispute over wages or land with the landholders and hence had not much to fear. Yes, the activists of Party Unity (a naxalite organization, which later merged with MCC, and is now active in the name of CPI-ML) were frequent visitors to the village. CPI-ML (Liberation) activists also came here off and on. That was the era of a bitter struggle in central Bihar, centered on the issues of land, wages and honour. On one side were the rural poor, the majority of whom were Dalits, OBCs and EBCs, and on the other were the rich Savarna landholders.

The Bhumihars had their own private army called the Ranvir Sena. The Sena was selectively targetting the villages where the possibility of resistance was either nil or minimal. The only objective of the Sena was to terrorize the poor and lower castes so that no one would dare challenge the status quo.

On the night of 25 January 1999, when the village was in deep slumber, armed men entered the village in small groups. They bolted the doors of the huts from the outside and set them on fire. When, on hearing the noise, people came out, they were fired upon. Then, the armed men broke open the doors to kill the children and women cowering inside. A total of 23 people were killed. The bloodbath continued for over an hour, after which the assailants withdrew, raising pro-Ranvir Sena slogans. An FIR was lodged in the Mehendia police station on the basis of a complaint filed by Prakash Rajvanshi. Ignoring the protocol, the then president of India, K.R. Narayanan, issued a press statement, calling upon the then Bihar government to act quickly and firmly against the perpetrators of the crime. At that time, Sunder Singh Bhandari (associated with the RSS) was the governor of Bihar and he had recommended dismissal of the Rabri government and imposition of president’s rule.