When Asuras are a tribe, to defeat them or to kill their hero – how can it become a festival to celebrate? What sort of a psyche does that symbolize? If someone made a festival of the massacre in Gujarat or the massacres of Dalits in Bihar, or say, a celebration of the death of Bhumihars – how would that feel? Agreed, the hero of Asuras, Mahishasura, was killed by Durga and the Asuras were defeated, but why does this have to be celebrated each year? You are actually insulting people through this festival. 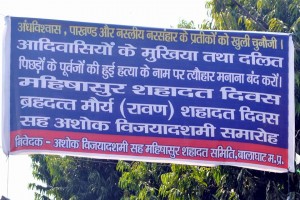 There is no intention to hurt anyone behind the idea to celebrate the martyrdom day of Mahishasura. In fact, we’ve set aside this day to reflect on why we lost. We are told our hero was killed through deceit, and/but we are still being deceived. Actually, by learning from our past we want to uplift ourselves in our present. There is no intention to hurt anyone because of this festival. All our symbols are being erased. We only found out through these sources that Ekalavya was a better archer than Arjuna. So then why are awards instituted in the name of Arjuna and not in the name of Ekalavya? Our heroes were pushed away in history. Our symbols are being insulted. We want to question the tradition that cut the thumbs and heads of our heroes. Their insult is our insult. Any society, thought, country is not merely a piece of cloth.

There is talk of saving the river Ganga. But that does not mean one destroys the Narmada, the Gandak and other rivers? If there is life next to the Ganga then the Narmada, the Gandak and other rivers also have people living on their banks. To keep the Ganga clean does not mean one has to make the Narmada dirty. We consider a pond to be as important as the Ganga. If the cow is holy then it does not mean one kills the buffalo. The buffalo is as important and valuable as the cow. Actually, the buffalo has a more crucial role in Indian society. Due to geographical reasons, more families depend on the buffalo. If the cow can be worshipped, then why is not the more valuable buffalo being worshipped too? A lion once killed a buffalo and that is being celebrated as a festival. Does anyone drink lion’s milk? The lion has to be kept away in the forest, else it will cause destruction. What kind of a symbol is that? What are you doing in the name of symbols? 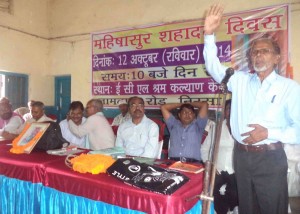 If your religious sentiments are being hurt by the celebration of this festival, then so be it. To satisfy your religiosity we are not pushing shudras into untouchability nor women into sati. We would protest against such a petty religion. Killing a Brahmin is punishable but killing a Dalit leads to salvation – what sort of a religion is that? This could be your dharma, it certainly is not ours. We see life similarly in a cow and a pig. We want our dharma to expand. We want to take it from the cow to the buffalo. We want even the pigs of a musahar to not die. We are more ethical than you.

If your religion is keen on treating some of the lower castes as untouchable, then to satisfy your dharma are we supposed to accept that? In the Constituent Assembly most landlords were saying that abolishing zamindari would bring about their deaths. So does that mean that zamindari should be allowed to continue? Actually, your vested interest is colliding with our interests. And that is subsuming even our basic interests. Your and our interests have always been different; we are just trying to establish some harmony there.

The worship of Durga and our defeat is for you the celebration of your tradition and culture. But since your tradition has also found happiness in sati, the varna system, untouchability, karmakanda, etc, do we let ourselves be oppressed? There is a major flaw in your religiosity. 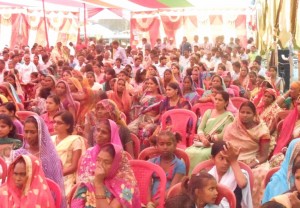 Mahish means buffalo. Asura is a tribe. From the word Asura must have come ahur and then ahir. When the word Hindu can originate from Sindhu why can’t Asura become ahur? Why is your knowledge of linguistics failing here? We just want to know what happened to our history? Why are we so miserable?

The present PM gifts the Gita to everyone. Gita believes in the varna system. We also have Buddhacharita and Tripitakas. We are talking of an equal society. You are doing the politics of domination and inequality in the name of religion whereas our struggle is for equality.

Mahishasur: Ek Jan Nayak (Hindi) chronicles and explains the Mahishasur movement. Visit http://www.amazon.in/dp/819325841X and get yourself a copy. English edition will be available soon)