Nowhere in the world do we find people of the same country divided into so many castes (divisions) based on (the accident of) birth as in India. 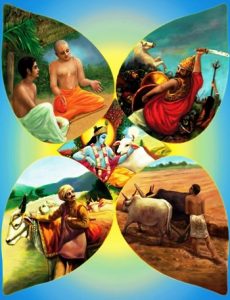 Generally, the “caste” system among the Hindus – only among people who are enslaved to Aryan principles, proclaimed to be “created by God” – has the basic division of people into four castes, Brahmin, Kshatriya, Vaisya and Sudra. Everyone knows this is a social hierarchy – the Brahmins at the top of the ladder, the others on the rungs below, the one on the bottommost rung considered the most inferior and degraded. Still, what is the reason for the prevalence of so many castes? This is because people who were divided into varnas as “assigned” by God during creation, subsequently deviated from them and “mixed” through lapses in observance of moral codes prescribed for each varna, leading to emergence of separate castes.

We are told that many important castes prevalent in our country came about due to this intermixture. The higher-caste people deviated from their moral norms, resulting in the origin of “Panchama castes”. It is said that in Tamil Nadu, the popular and important caste of Velalars was one of these Panchama castes and that people in this caste came about by Brahmin and Kshatriya girls marrying men from other varnas and giving birth.

It is also mentioned that among these people called Velalars, those who were agriculturists were referred to as “kaniyalars” and those in administrative posts were called Velan Samanthars; texts like Supra Bhothakam, Brahma Puranam, Vaikanasam, Madhaviyam and Sathivilakkam authorize this categorization.

If a Brahmin begot children by a Vaisya girl, such children were called Ambattans and if the children were born out of wedlock they were referred to as Kuyavars (potters) and Navithas(barbers).

Similarly, if a Brahmin begot children by Sudra women, they were called Baradhwar or Sembatwar and those born out of wedlock were called Vettaikaran or Veduvar. If Brahmin girls married to Kshatriyas had children, the children were referred to as Savarnas and Telungars.

Similarly, if girls of the Ayovaha caste (one of the castes that came about from the intermixing of the lower and higher castes) had children with Nishadas, they were known as Bharghavas. In this way, a number of rules have been framed for assigning castes to people. These rules are found in Abhidana Kosak, Abhidana Chintamani and other books cited by Hindu pandits as authorized texts. Also, among many other castes considered inferior to four principal castes, children born from the intermixing of higher-caste women and lower-caste men and higher-caste men and lower-caste women, and those born out of wedlock are referred to as Chettiars and Asariyars.

These people are referred to by these caste names degradingly. So if we persist with the caste system, it is tantamount to our indirectly accepting these degrading remarks.

We stated the reason for the four original castes in the course of time multiplying into 4,000 castes was the intermixing of one caste with another. Still there are people among us, those called Velalars, who accept the original system of four castes, that is Brahmin, Vaisya, Kshatriya, Panchama and consider themselves “sad Sudras”. There are others who, instead of using the Sanskrit terms for graded caste names, use beautiful Tamil words like Anthanar, Arasar, Vanigar and Velalar. They claim these categories were there before the arrival of Aryans and that they belong to the fourth category. According to a myth they created, 18 slave castes came into being such as Pallu and Pariah.

It can be observed that the above arrangements carefully avoid discrimination and shuffling of positions among the Brahmins and hence no objection can be raised or doubt cast on their position. It clearly explains the cunning nature of the caste system. Otherwise, quarrels among Kshatriyas and Vaisyas are mentioned; objections, without any basis, on who is superior to the other, fights for supremacy, demoting a caste and so on can be discerned. Also, the sources people of the other caste cited to push themselves above fellow castes cleverly indicate that all these castes are inferior to the Parppanars or Brahmins. But these sources are not useful for unravelling the mystery of the creation of these other categories. 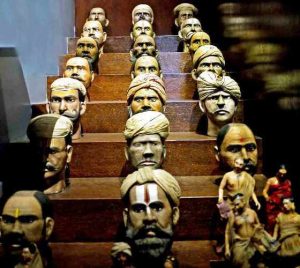 So, in this way, it was established that compared with the Brahmins, others are inferior castes – unfit neither to be touched by nor to dine with Brahmins. It was also thus established that the other castes may not have other rights, they are fit only to be subservient to Brahmins, they were born as a result of illegal cohabitation – low-caste-high-caste cohabitation leading to intermixture – and by and large their condition was degraded. This, in brief, is the essence of the caste system.

If any logical or philosophical explanation is given for this arrangement, only stupid people will listen to it, or to a religion that created this arrangement and texts that support this arrangement like the Vedas and Sastras, the so-called code of righteousness. Without asking valid questions raising objections to these explanations, people have to merely accept their degrading condition.

Leaving these aside, if we look at the positions and rights assigned to everyone except the Brahmins, we can easily see that no rational or self-respecting people will accept what are referred to as the names of their castes. In fact, one cannot accept even in their dreams the degradation that results from the caste division. If you look at the position and rights assigned by the Brahmins to the fourth varna, the Sudras, it is akin to the present government classifying some people as “traditionally criminal class”, who are obliged to live under the terms and conditions decided by the government and have no choice but to accept the way they are treated.

For example, we will quote in Sanskrit from what are referred to as Dharmasastras or code of righteousness: “Snathamaswam gajamatham rishabham kamamohitam sudrama ksharasamyuktam dhoorata parivarjiyem.” This means that a horse that has been given a bath, a mentally tense elephant, a bull in sexual pursuit and a literate Sudra should not be allowed to come near.

“Naiva sastram patenaiva srunuvan vaidhikaksharam, nasnayatu dayalpurvam thapo mantram suvarjayel” means a Sudra should never study Sastras, or listen to the Vedas; he should never get up before sunrise and take bath or say mantras or do severe penance either.”

“Itihasa puranani, napatesrotumarhasi” means a Sudra should not even read Itihasa and Puranas but he can listen to a Brahmin reading them.

Thousands of such quotations can be cited and explained. This is what is contained in the scriptures – Vedas, Dharmasastras are referred to as revelations from God – of what we regard as our religion.

For some reason, we have a government that is not obliged to abide by these religious regulations. Similarly, even some of us are not obliged to live according to these “right” rules and regulations. But again if attempts are made to protect our religion and caste, to stabilize them, think of the havoc we have to face and the consequences.

So long as there are caste divisions within Hindu society, the perceptions of “high” and “low” will be there.

Today, those who are nationalists and desire that India should have full independence must make efforts to eradicate the caste differences while the British are still in power. Instead if they say, “You leave us, we will take care of things”, it is equivalent to us swallowing poison ourselves and no good will come out of it. In India, today, 999 out 1000 people are not interested in abolishing caste differences. In fact, they want to be in a higher caste from where they can dominate a number of lower castes. Today, if we were to give up the rights acquired under the present [British] rule, and if administration were to come into the hands of people who are committed to varna dharma and caste domination, the atrocities of the caste system would never be wiped out.

The above text brings together the editorials that appeared in the Republic (Kudiarasu) on 16 November 1930 and 30 November 1930.

Translated from Tamil into English by Prof T. Marx