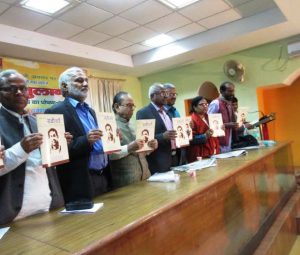 Addressing a session titled “Manifesto of Social Justice in the 21st century” at the “Mandal Ulgulan” function organized by Baghdor in Patna recently, Kancha Ilaiah, the keynote speaker, called upon the people to “study English and move forward”. The maiden issue of Subaltern magazine was released on the occasion. Among others addressing the function were Urmilesh, Premkumar Mani, Dilip Mandal, Shanti Yadav, Mahendra Suman and Shrikant. Santosh Yadav was the compere. Historian O.P. Jaiswal chaired the function. – Dhananjay Upadhyay

The leftist organizations are gradually shedding their old ideas about caste. A session on the issue of caste formed part of the national convention of National Federation of Indian Women at Vishakhapatnam from January 22-23. Dalit thinker and activist Kaushal Pawar was invited to address the session. Resolutions on the issue of casteist oppression were passed. Annie Raja, the national secretary of the Federation, said, “We have delayed considerably in making this the central issue.”