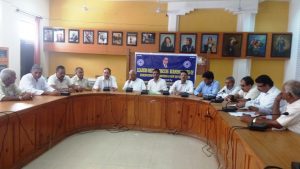 Kathua: All India Confederation of SC/ST/OBC Organisations’ Kathua chapter organized a youth conference to discuss the burning issue of reservation in promotions for SC/ST/OBC/RBA (Residents of Backward Area)/ALC (Residents of area adjoining Actual Line of Control) and take stock of the latest developments in the Jammu & Kashmir Assembly, Srinagar. While addressing the conference, Roshan Choudhary applauded the decision to hold another rally to pressurize the state government to start implementing reservation in promotions immediately. He appealed to the members to send a large contingent from Kathua to participate in the rally, which will begin at Dogra Chowk, near the Press Club, Jammu, at 10 am on 26 June 2016.

R.K. Kalsotra, state president of the confederation, also spoke at the conference. He said that the confederation would fight on till the decision was reversed but that for this to happen, there needed to be a show of strength at the rally. He urged the members to approach the masses in person and encourage them to attend the rally. Further, he said that the confederation would continue its struggle till the state government implemented the 77th, 81st, 82nd & 85th Amendments of the Constitution. Among those who confirmed their participation in the rally for reservation in promotions on 26 June and expressed willingness to mobilize others were Nav Chetan, Ajit Kumar, Lalit Kumar, Manoj Kumar, Gayatri Nandan, Manohar Lal, Shyam Lal, Devinder Pal, Kishore Kumar, Ankush Kumar and Naresh Kumar. Dev Raj Soni proposed a vote of thanks and said it was the need of the hour for everyone to attend the rally and pressurize the government to restore their rights to them. He invited employees, social organizations, religious bodies, student bodies, NGOs and parties to be part of the rally and make it peaceful and successful.