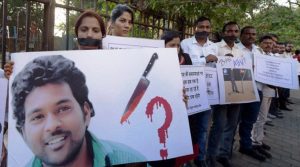 I am a Dalit. I am the history of the oppression that you participated in and has put a big question mark on your status as a human being. I am a question mark on your civilization. You have no answers to my questions. You do not have the courage to look back on history. If you consider what happened in the past was right, I have no complaints against you. I am happy to see the hypocrisy of your sham civilization. I want to take you back into history – to the times when you did not consider me a human being, you did not acknowledge my existence, you did not want to touch me, you shunned even my shadow. You said you were god on earth and I accepted it without any question. It was my loyalty; you took it as my foolishness. History bears testimony to the fact that even then, I was an Eklavya, a Karna, a Shambuk and a Barbarik. You were afraid of me and so you took away my thumb, my shield and my life. And I did not even utter a word of protest. I was the need of your society, which you could not have fulfilled without weaving an elaborate web of hypocrisy. You were civilized because I was there. Otherwise, you would have been a heap of refuse, you would have been rotting, your body would have been emitting foul smell, your houses would have been full of nauseating odour, your atmosphere would have been morbid. I gave you a neat and clean life. What did you give me? The “theory of pollution”, the “sting of untouchability”. If you call yourself a human, I am happy that I am not a human of your category. I am not interested in becoming a human like you. You are religious-minded. You believe that change is truth. Good. Many a time you told me that you want to begin a new chapter, you want to wash off the sins of history. I thought you had undergone a change of heart. I believed you. I thought you had become civilized. I thought you had become imbued with true human consciousness. I thought maybe your history had shocked you, maybe you had become human in the true sense of the word. I thought that if you were reading Babasaheb Ambedkar, if you were worshipping him, something must have changed. I thought you were developing faith in the wisdom of Tathagat Buddha. But now I realize that you still consider yourself a god. You are yet to become human. I took the initiative to break the caste system. I dropped my surname. But you consider your surname your pride. Even today, your caste is your prized possession. I am not fighting against any caste or castes. I am fighting against the caste system.

I did not see you rise in protest against the atrocities committed in Una, Gujarat. I did not see tears in your eyes, I did not see you raising your voice against the system, I did not see you perturbed, I did not see you filled with horror. When I found that your heart was filled with the same love for your sacred cow and saw the replay of the atrocities against me, I realized that you can never become a human being – or you do not want to become one. Anyway, you were never god to me. I have given up my delusions. I am not “polluted” but “sacred” and that was why you sacrificed me for centuries. Don’t you sacrifice only what is sacred? Just go through the debate between Babasaheb and Karpatri Maharaj. It will be an eye-opener for you. The sacrifice of cow was prohibited because it was not sacred. Keep your sacred cow with yourself. I have resolved not to even touch your sacred cow. I also have a cow. It gives more milk than yours. When it dies, I lift it with my own hands and bid farewell to it. I am not a hypocrite like you. For you, the cow is your mother till it yields milk and a dead cow once it is of no use. 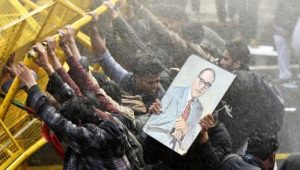 I am no longer a part of your system, your society. I am no longer loyal to you. I am loyal only to the Constitution. Your country – the country of draconian laws is not mine. If a country is run under your laws, it is not for me. My country is of everyone – of you and me – and all are equal. If you want to bind us to social norms, first build a society. You have always deprecated my skills, my merit. Have you forgotten that period of history when hot oil was poured into our ears because we tried to acquire education? I see no glory in coming first. I consider the man standing on the last rung as skilled and meritorious. I did not create the Constitution in which a few were gods and the rest worse than animals. In the Constitution I wrote, you were equal to others and others were equal to you. But you have a pathological hatred for equality. I did not build the bridge that collapsed. You built it. You can see the report. I did not leave scissors in someone’s abdomen. If I did, give proof. Who knows better than you how to weave a web of falsehood and hypocrisy? You have a mastery over creating illusions. I respected you but you mistook me for a slave. I have broken free from your illusory world. I have risen – not against you but against the atrocities you and your mindset committed against us. You and your system killed innumerable Shambuks and Rohiths; you deprived countless Eklavyas of their thumbs. But I am not like you – neither I was nor I am. Babasaheb had said that one should not hate a person, but a mindset. Unlike you, I do not want the whole world. I only want my share, an equal share, my identity and my self-respect. I want equality, not an empire. I am a Dalit. I am not your cow that you can milk and then leave to die. I pity your cow too. I will fight against this system and against you till the end and get my fair share. And I will also fight against you for the rights of your cow.

Deepak Bhaskar teaches in Daulat Ram College, Delhi University, and is a PhD scholar at the School of International Studies, JNU.