The full name of J.N.P Mehta was Jadunandan Prasad Mehta. He tried to establish himself in the mould of “Sahastramukhi Faquir” and Sahastranand Saraswati. The Triveni Sangh movement, which Mehta and his associates launched, is of great importance in the history of Bihar. Born in the then Shahabad (today’s Bhojpur) region of Bihar in the 1930s, the movement was basically an identity-based movement of peasants, workers and small traders. Its impact on the sociopolitical life of Bihar lasted more than two decades. J.N.P. Mehta was the progenitor and theoretician of this movement. Prasanna Kumar Chaudhary and Shrikant’s book Bihar Mein Samajik Parivartan Ke Vividh Aayam (Various dimensions of social change in Bihar) and Kalyan Mukherjee and Rajendra Singh Yadav’s Bhojpur Bihar Mein Naxalwadi Andolan (Naxal movement in Bhojpur, Bihar) give a detailed description of the movement that was Triveni Sangh.

This movement reminds one of the Narodniks movement in Russia in the 19th century. Rahul Sankrityayan, Sahjananda Saraswati, Satinath Bhaduri and many other writers have referred to this movement. Now, the politicization of the ignored groups and their coming to power has helped revive the memories of this movement.

In the 1930s, India’s national movement was at its climax. The members of the Triveni Sangh wanted to know what Gandhiji’s Swaraj had in store for them. They wanted Swaraj to become the harbinger of the aspirations of the farmers and workers. Building an egalitarian society was their dream and they were working for it. This movement is much more important than the movement of Sahjanand Saraswati because of its wider sweep and its forward-looking nature. It is unfortunate that not much work is being done on this movement and its leaders. One reason for this may be that while the people for whom Triveni Sangh worked have become politically conscious, they are still backward culturally, with little interest in preserving their history.

I was fortunate to have seen Jadu Nandan Mehta in both my childhood and youth. As I delve into my childhood memories, a hazy picture emerges. I must have been 7 or 8. A big yagna was held in my village. There is a story behind the yagna too. In my village lived a widow belonging to a backward caste. She was widowed at a young age and had decided to become a Sadhvi. She had converted her house into a temple. Her devotion to god and her felicity at singing bhajans endeared her so much to the people that they started addressing her as Maiji. She also gave lessons in religion and moral conduct to the village women. Once, she decided to organize a grand yagna in the village and she started visiting the surrounding villages to collect food grains and money for the event. When she was passing by a village populated by the upper castes, some lecherous youngsters, angered by a backward-class woman turning into a sadhvi, pulled her sari, leaving Maiji without a single strip of cloth on her. Unperturbed, she walked ahead. The news spread like wildfire and soon women of the village rushed to Maiji and began pleading with her to cover herself up with the clothes they had brought from their homes. Due to their persistence, she agreed.

Before Maiji was back in the village, the tale of her humiliation had become public knowledge. A large crowd had assembled at her temple. My father was a staunch Congressman and had nothing to do with yagnas or religion. But after this incident, he took upon himself the responsibility of organizing the yagna, which was held with great fanfare. The backward castes gave the event the shape of a movement and more than one lakh people participated in it. My father invited Jadu Nandan Mehta to conduct the yagna. Mehta, who used to dress like a sadhu, stayed at my place for more than a month. I hardly remember what happened at the yagna. What I do remember are the huge crowd, the sweets that were distributed as prasad and the saffron-robed sadhu, who was J.N.P. Mehta. Everyday, the religious ceremonies done, he used to visit the neighbouring villages to distribute the small booklets published by him. He delivered short speeches and used to sing songs between them. I remember that people used to listen to him mesmerized. What was even more surprising was that he took out eggs from his saffron bag and distributed them among women. He also used to talk about food and would say that the children of the backward castes and of farmers and workers do not get proper nutrition. Rice and roti can keep one going but for developing one’s brain, eggs and fish are needed, he used to say. I don’t know whether the Mahatma had actually said so but he quoted Gandhiji as having said that the people of Bengal were more intelligent because they consumed fish. Though I was very young, I found a sadhu promoting consumption of eggs both surprising and amusing. Even today, I cannot stop marvelling at how he tried to transform society. The food of the poor still lacks nutrition and his solution is still valid. 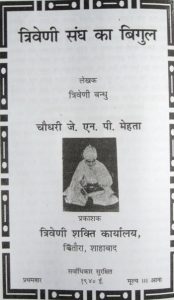 Around 15 years ago, I read an article by Ved Pratap Vedic in the Hindustan Times in which Vedic said that the V.D. Savarkar, the prime ideologue of Hindutva, had once launched a movement to promote beef eating among Hindus. Savarkar’s logic was that the beef-eater Muslims and Christians were ruling many parts of the world while the Hindus were weak because they didn’t eat beef. He wanted to make the Hindus stronger. While reading that article, J.N.P. Mehta came to mind. Of course, Mehta was not worried about the Hindus but about the future of the coming generations of backward castes, farmers and workers. He believed that our children were mentally weak and wanted them to overcome that deficiency. In Kabir’s words, he wanted to create “gyan ki aandhi” (A tempest of knowledge) – a knowledge revolution. He understood the deep import of Francis Bacon’s maxim, “knowledge is power”, and wanted the backward classes to become powerful by acquiring knowledge.

At one time, I also believed that Mehta was trying to become the “Sahjanand Saraswati of Backwards” but later I came to realize that his concerns were much wider. What he spoke, what he wrote and the way he conducted his movement make this clear. Success did not come his way but the spark he had ignited did not go to waste. The Triveni Sangh, founded by Mehta and his associates, laid the foundations of the subsequent awakening of the backward classes.

I saw J.N.P. Mehta next around 1980 in Arrah. Some lawyers introduced him to me. I was quick to recognize him. The saffron robes and the face were the same but he looked tired and weak. There were no proper arrangements for his house and food. A bunch of backward-class lawyers practising in the Arrah court pooled money off and on to help him. This continued till his death in 1986. By then, the politics of backward classes was on the rise in Bihar. But its leaders lacked the ability to recognize their real benefactors.

Born in Lakhan Tola (Jagdishpur), a small village in the then Shahabad (now Bhojpur) district in 1911, Mehta sold off his three bighas of land after hearing about the plight of immigrant farmers in Burma and travelled to that country to fight for them. Just as Gandhi had fought against apartheid in South Africa, Mehta organized the farmers in Pegu district of Burma. Perhaps, it was during his stay in Burma that the idea of setting up an organization of peasants came to his mind. After returning to Jagdishpur, he, along with his associates Sardar Jagdev Singh, Nandkishore Singh, Shivpujan Singh and others, founded the Sangh. He also established a printing press and started the publication of a magazine called Shoshit Pukar. Soon, Triveni Sangh had taken Bihar by storm and spread all over the state. Its effect can be felt even now. Whenever in the future, the members of the backward and deprived social groups become culturally conscious and search for their heroes, Jadu Nandan Mehta will get the honour he deserves – though not like a historical personality but like a mythological hero. That is because not a single photograph of his is available and no memorial was built to commemorate him. When the people create their heroes on the basis of their collective memory, they tend to give them a mythological colour.

(Based on a conversation with Arun Narayan)