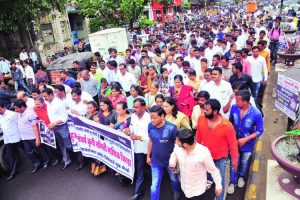 On 31 August, veteran Maharashtra leader Sharad Pawar kicked up a row by saying that the demand for abrogation of the SC, ST (Prevention of Atrocities) Act should be taken seriously as it was a social reaction. The powerful Maratha community of the state has taken to the streets to protest the rape and murder of a girl in Kopardi on 13 July. Peace marches are being taken out, invoking the name of Phule and Ambedkar. One of the key demands of the protestors is the abrogation of the Act.

Meanwhile, Professor Shrawan Deore, president of Maharashtra OBC Sangh, in a statement, has demanded that the Act should be extended to cover the EBC artisan castes too. “The condition of EBC artisan castes is miserable in the rural areas of the state. They are discriminated against on caste basis. Industrialization has gobbled up their jobs. The Savarnas humiliate them using casteist invectives.”

According to Deore, “Dr Ambedkar believed that the education would end casteist hostilities. Ambedkar was also hopeful that post Independence, the ruling classes would continue with the progressive policies of Shahu Maharaj and Sayaji Rao Maharaj. That was why he did not include in the Constitution a provision for punishing those who commit atrocities against the weaker sections. However, the ruling classes dashed Babasaheb’s hopes. As caste-based atrocities continued to spiral, the progressive V.P. Singh government at the Centre promulgated the SC, ST (Prevention of Atrocities) Act on 9 September 1989. Had VP Singh been the PM today, he would have definitely brought the artisan castes within its ambit.”