Some recent events in Chhattisgarh seem to indicate that the Tribal community of the state begun fighting the RSS-sponsored culture of dominance. In Sukma district, the Tribal community is up in arms against the case filed against former MLA Manish Kunjam. Dharma Sena’s Sushil Maurya had an FIR registered against Kunjam on 17 September for posting a controversial comment on goddess Durga. On 19 September, Hundutvavadis organized a Sukma Bandh demanding the arrest of Kunjam.

I am a Tribal and a descendant of Asur: Kunjam

An unruffled Kunjam, however, says that he is a Tribal and a descendant of Asurs. “As an indigenous inhabitant, I am the worshipper of Budha Dev.” Addressing a public meeting organized by AISF in Sukma, he said, “The Brahmins have presented a wrong image of Asurs in religious scriptures and mythological tales. Asurs are shown as demons with long nails and hair. This is an attempt to humiliate the Tribals. It hurts our sentiments.”

Kunjam said, “I did not write the post allegedly insulting Durga that went viral on social media but I believe some things in that post to be true. Durga’s idols are made by bringing soil from the house of prostitutes. Mahishasur was the king of Tribals and Dalits. I am a Tribal and his descendant.” He added. “Just as the RSS and the Manuvadis feel hurt by comments against Hindu gods and goddesses, we are also pained by the wrong projection of the image of Asurs in religious scriptures. There are many tribal gods in Bastar like Mahishasur. I worship all of them.”

Cases, arrests and response of Tribals 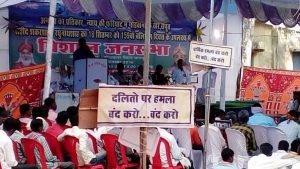 Earlier, in February 2016, a case was registered against social activist Vivek Kumar in Manpur town of Rajnandgaon district for allegedly insulting Durga. Earlier this month, Bharat Kurre, an active member of Raipur Samajik Manch, was arrested after he was accused of insulting Durga.

But the battle is not entirely one-sided. Abusing Tribals and Mahishasur at a demonstration held in Manpur Bandh to demand Vivek Kumar’s arrest cost dear to the Manuvadis. Tribal organizations too had a case registered against them. The anticipatory bail applications of the accused have been rejected by the High Court and they are absconding. The Tribal leaders, however, allege that the police aren’t arresting the accused because it is under pressure from the BJP state government. Among the slogans raised at the demonstration was, “Mahishasur ki auladon ko, jute maro salon ko” (Beat Mahishasur’s descendants with shoes). For details, read Insulting Mahishasur costs dear: Tribals hit the streets in FORWARD Press.

Case to be filed in Sukma too

Sukma’s tribal leaders told FP that they would also try and have a case registered against the Brahmanvadis for insulting tribal culture. He said that those taking part in the demonstration to demand the arrest of Kunjam had hurled insults at Tribals and Mahishasur, which is a crime under the SC, ST (Prevention of Atrocities) Act. Tribal leader Rama Sodi said that Tribals have been meeting in different places and listening to readings of excerpts from the book Mahishasur: Ek Jananayak.

Cultural struggle and claims over culture

On this issue, Gandhian human rights worker Himanshu Kumar wondered why the Hindutvavadis were panicking if some people were talking about an alternative culture. The Tribals were speaking out against the Manuvadi agenda of RSS by bringing up the story of Durga and Mahishasur. Manish Kunjam said that the RSS wanted to divert attention from the struggle of Bastar Tribals. What is noteworthy here is that Kunjam has launched a campaign against corruption in Chhattisgarh’s BJP government.