Muchkund Dubey, a former officer of the Indian Foreign Service (IFS), is an educationist with a wide range of concerns. It was his efforts that convinced Bihar Chief Minister Nitish Kumar to set up a commission to make recommendations on how common education can be implemented in the state. Dubey headed the commission. Unlike most commissions, which are known for their lethargy, Dubey’s team submitted its report to the CM within the stipulated time frame.

The government, however, consigned the report to cold storage. But Dubey’s hard work did not go to waste. The former UPA government promulgated the Right to Education (RTE) Act based on Dubey’s recommendations. However, now, he is perturbed by the injustice being done with the children of Dalits and OBCs in the name of this Act. He is also planning to challenge the government in the Supreme Court. Excerpts of an interview with him:

Education has emerged as a big issue the world over and the sector has witnessed wide-ranging changes. As an IFS officer, you have worked in many different countries. How do you see the changes in the education sector at the global level?

You are right. Globalization has brought about a wide range of changes in education all over the world but it still has its own limitations. But with respect to India, I would say that here, the rights of the deprived are being trampled upon. The world over, universalization of education is the buzzword. In the field of education, universalization means equality. School education is being given great importance in countries less developed than India. But in India, no one seems to be serious about this issue. This is unfortunate. At the global level, the quality of education has emerged as a big issue. New standards have been developed and new goals set. In many countries, the private sector is being given the responsibility of improving the quality of education. This is an important change.

Isn’t the entry of private sector in the field of education fraught with dangers? Won’t it create the same kinds of problems that have emerged in other fields? For instance, education will become costlier and the majority of the people will be deprived of quality education.

No. The countries, where this change has been made, already had a common school education in place. So, even if private investment comes in, the form of school education will remain the same. The governments of these countries have ensured that whether a school is private or public, all children – rich and poor – will get education there. What is most important is common education. Without it, you cannot bring about improvement in the quality of education. Private institutions cannot do this. If this happens in India, it will be a disaster. Like there are different classes in society, there are different classes in education too. Different boards are an example of this.

The commission you headed showed the path ahead to the entire country and the government at the centre drafted the RTE Bill. Please tell us how it happened.

It all began in Patna. I was invited to a seminar on education. Among the audience was Chief Minister Nitish Kumar. In my speech, I spoke in detail about common education. After the seminar was over, I went back to Delhi. A month later, I received a call from the secretary to the chief minister. He told me that the chief minister wanted to implement common school education in Bihar and had proposed setting up a commission to decide how it should be done. This responsibility was given to me and I handed over the report to the state government within the stipulated time. I was sure that the sensitivity shown by the chief minister in giving me this responsibility would also be reflected in the implementation of my report. But that did not happen. I was disappointed.

Why do you think this happened?

I have no hesitation in saying that there is a conspiracy behind this. The innocent children of this country are the victims of this conspiracy. But I am confident that there will emerge a way out. I feel the problem is that education has not become a political issue. Till the politicians feel that providing quality education to all can fetch them votes, nothing will happen.

Don’t you think that most of the children deprived of education are from the majority Dalit-OBC communities and Nitish Kumar represents these castes and classes?

You are right. But as I said earlier, till the deprived classes realize their political clout, their rights will continue to be violated. The castes and classes you are talking about should understand that by not implementing common school education, the governments are seriously hurting their interests.

But you were happy that even if the Bihar government did nothing, at least the then central government made RTE a law. 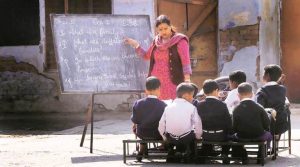 Not happy, but I had some satisfaction seeing that at least there was some progress. The former UPA government used RTE as an electoral weapon. RTE has little to do with common school education. The law itself talks about four-five different kinds of schools – central schools, government-funded schools, navodaya vidyalayas, etc. But the biggest shortcoming in this law is that it completely neglects the financial aspect. In my report, I had talked in detail about the entire process – from how it will be implemented to how it will be financed. There are other deficiencies too. It ignores the neighbourhood principle. When I was posted in London, the locality in which I lived was notorious for drug trade. I wanted my children (at that time, my elder son was in grade 5 or 6 and the younger one in grade 1 or 2) to go to a school in the Cromwell area. I met the principal but I was told clearly that the neighbourhood of the schools is pre-decided and that my children would have to study in the school designated for my locality. I was told that even the British Prime Minister wouldn’t be able to help me in this matter.

When RTE was implemented in our country, this concept was missing from it. This strikes at the very root of the principle of common education. When all the children of a locality do not study in the same school, how will education be common? What, however, made me hopeful was that the law talked of a time limit. I had talked about it in my report. Time limit should be fixed. But despite time limit being fixed, it is not adhered to. Today, no one talks about common education in our country.

Don’t you think if social status, rather than economic status, had been the criterion for compulsory 25 per cent admissions under RTE, the Act could have been more effective?

I have always been against this. Why 25 per cent? All children should get education. By making this provision, the government dealt a death blow to the very principle of common school education. All children – whether rich or poor – have right to quality education. Differentiating between children is wrong. It should be opposed.

How serious is the present government at the Centre about implementing RTE?

The Congress government was not committed to it. It tried to use it as an electoral weapon. But I must say one thing. That government did give importance to the development of infrastructure. Because of that, many schools got buildings and toilets. But what was really needed was not done. The present central government has killed RTE. The reduction in the outlay for education is an issue but what is equally distressing is that instead of opening new schools, the government is shutting down existing ones. The argument is that the schools with a small number of children should be merged with bigger ones. In Rajasthan alone, more than two lakh schools have been closed.

Last question. Are you confident that your dream will be fulfilled?

I will continue dreaming as long as I am live. We have decided to move the Supreme Court. We will draw the attention of the judiciary to how a big population is being deprived of education. We are holding meetings. Many more meetings need to be held. We will be moving in that direction soon.