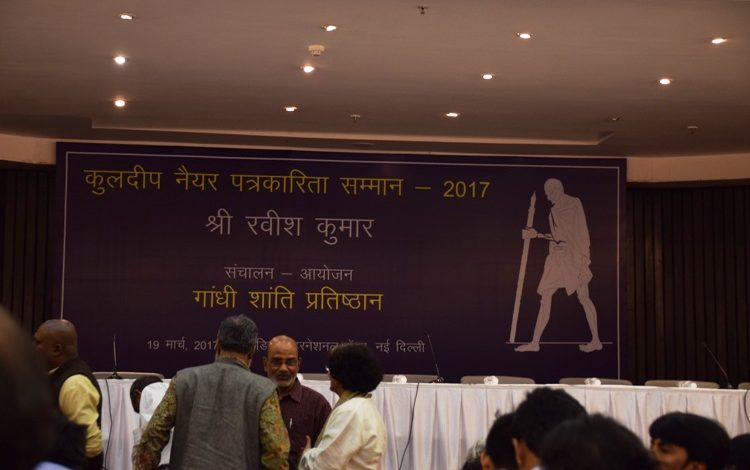 “Sab log waha nahin he” is how Ravish Kumar began his acceptance speech after receiving the inaugural Kuldip Nayar Journalism award. “Waha” (Over there), just a few hours earlier, Yogi Adityanath had been sworn in as Uttar Pradesh’s chief minister. Coincidentally, the swearing in of the Hindutva poster boy as the chief minister of India’s largest state and the presentation of the award instituted by Kuldip Nayar and the Gandhi Peace Foundation to Ravish Kumar, the most consistent voice in the media against the excesses of the government, took place on the same day.

About 500 people had gathered in the Multipurpose Hall of the India International Centre to see Ravish Kumar receive the award. As the programme was about to get under way, Swami Agnivesh entered with a small entourage. Just as he was about to disappear into the back of the hall, someone from the stage jokingly called out, ‘Swamiji, aapka jage toh stage pari he. Kaha jaa rahe ho’. (Swamiji, the stage is where you belong. Where are you going?) Swamiji turned around. He looked bemused and muttered something. There were peals of laughter. Eventually, he didn’t step on to the stage but his orange turban could be spotted somewhere near the front of the audience. This set the tone for an informal evening of some serious, unpretentious reflection. Vijay Pratap recalled the stifling Emergency and how in jail he and his friends used to feel grateful when they got a chance to read Kuldip Nayar’s columns in the Indian Express. Similarly, he said, this award ceremony was not about honouring Ravish Kumar. Rather, he added, it was about expressing our gratitude to Ravish – for his constant knocking on the invisible walls that threaten to hem us in. Priyadarshan, a journalist and a colleague of Ravish Kumar at NDTV, said this award ceremony was an opportunity to let Ravish know that those seated and standing among the audience were with him in his endeavours to keep our Constitutional freedoms intact. 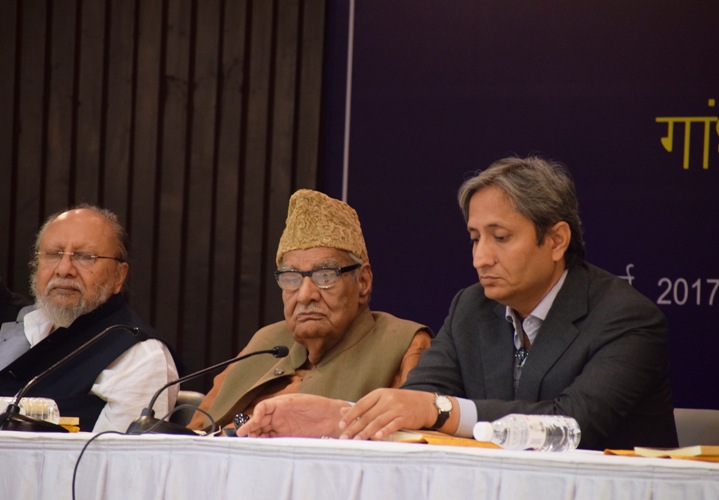 After a lifetime in journalism, Kuldip Nayar, 93, couldn’t possibly have ignored that an anti-Muslim rabble-rouser had become the UP chief minister. He had to talk about it. “It is for the Hindus to erase the fear of Muslims in India today so that the Muslims feel they belong here. It is true that we are 80 per cent Hindus but we had agreed that the country would be ruled in accordance with the Constitution, and the Constitution enshrines equality before the law and the idea of one person, one vote.” 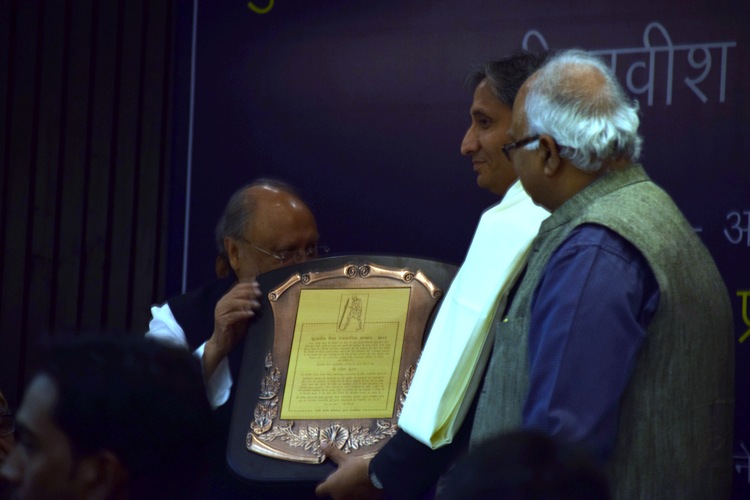 While reflecting on this development in UP, Kuldip Nayar sought solace in nostalgia: his early days in Sialkot, Pakistan, growing up with Muslim friends and how he wanted to remain in Pakistan even after the Partition just as some Muslims chose to stay back in India. But while India’s policy was to give its Muslims the freedom to choose between India and Pakistan as their future home, his Pakistani friends told him he belonged to the other side of the border. “As I arrived at the border, I recalled seeing in no man’s land a Muslim caravan going the other way. We stood and looked at each other. We didn’t talk. We, refugees, shared a strange relationship.” 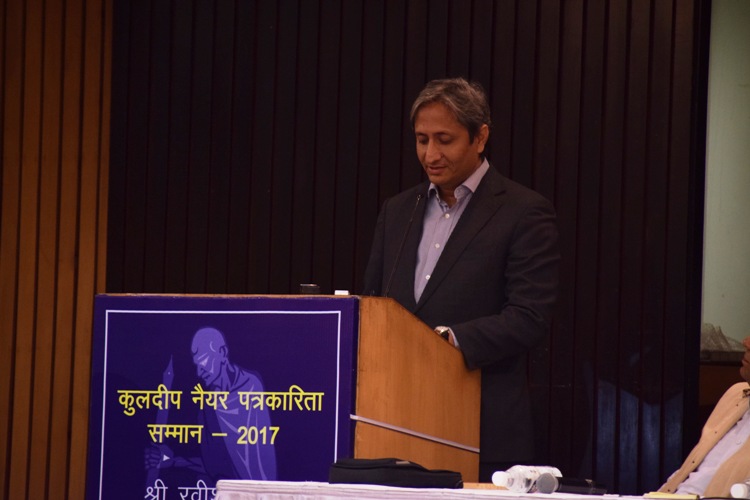 Ashish Nandy presented Ravish Kumar with the award. He wrapped a shawl around Ravish, presented him with a cheque of Rs 1 lakh and a memento. One of the few women in the crowd was Ravish’s wife Nayana. She was also asked to join him on the stage while receiving the award and she obliged.

When it was his turn to speak, Ravish Kumar was at his philosophical best and unsparing in his criticism of the current state of affairs. “We’re unaware that dangerous times are upon us. We’ve become numb to an extent that we don’t realize that they are driving a needle into us.” He talked about the diminishing freedoms, and the media being a silent, even an applauding, spectator. 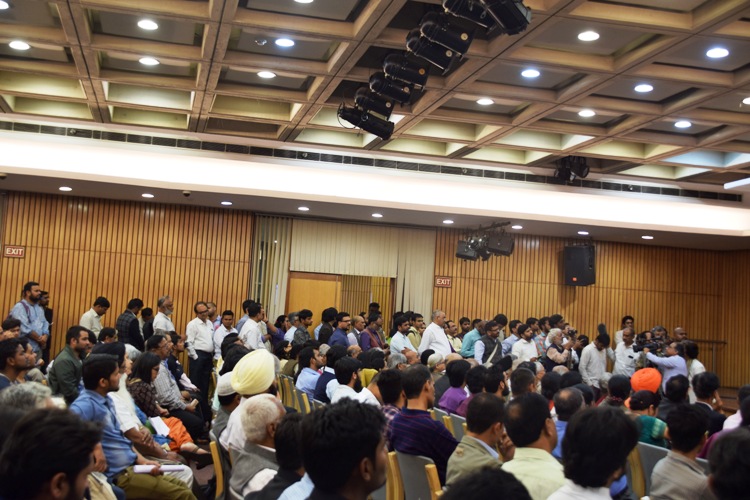 The audience at the award ceremony

“Lawsuits, inspector, income tax officer have become very active these days … and the news anchor is the most powerful police man (thanedar) today,” he said. 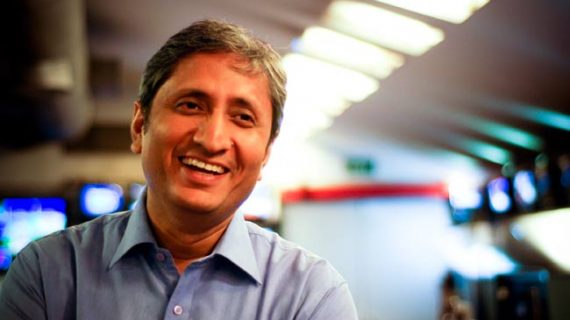 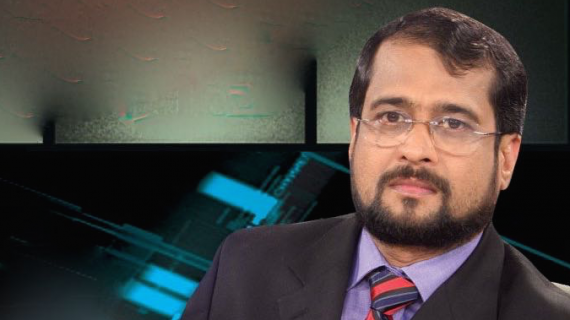 Nikhil Wagle, this year’s winner of the award, has always been in the crosshairs of the Shiv Sena. In 1994, he had to spend a week in jail on the charge of contempt of the Maharashtra Assembly