“We Tamils are convinced that the BJP are anti-Tamil. We demand that they close their party office, Kamalalayam, in Chennai,” says Manoj, spokesperson of the Tanthai Periyar Dravida Kazhagam (TPDK). “We have launched this struggle and will keep at it to convince the people of the need to keep the BJP out of Tamil Nadu.” 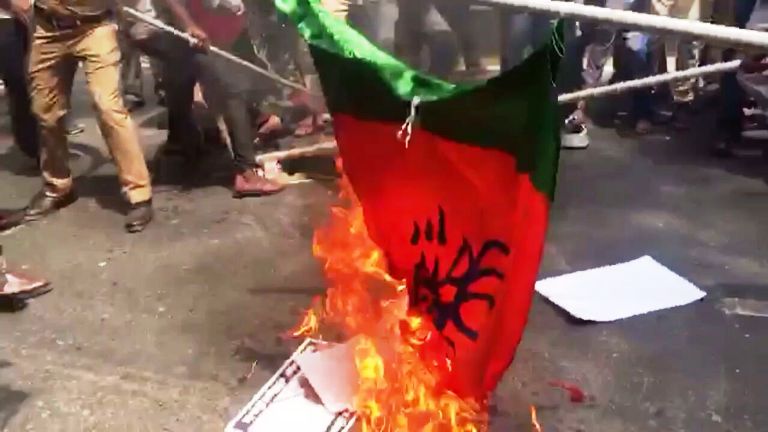 Activists of TPDK stage a demonstration in front of the BJP office in Chennai, burning the BJP flag and an effigy of Prime Minister Narendra Modi

On 14 March, about 200 activists of the TPDK staged a demonstration before Kamalalayam, the BJP party office in Pondy Bazar, in up-market T Nagar. Police stopped them about 50 metres from the building. According to Manoj, the activists burnt the BJP party flag. As policemen closed in on those who burnt the flag to arrest them, another team rushed in and set aflame an effigy of Prime Minister Narendra Modi.

After former chief minister Jayalalitha’s prolonged stay in the hospital – during which she had appointed an interim chief minister ­– and then her passing away, the BJP has sensed a political vacuum in the state and an opportunity to break the last bastion of resistance to its saffron blandishments. It was only in the last state assembly elections, in 2016, that the party opened its account in the state with one MLA from a south Tamil Nadu constituency.

But it is not for the lack of effort. The BJP has tried its best but found it practically impossible to make inroads into the state.

Caste loyalties are strong in the state, despite its tradition of non-Brahmin mobilization. However, the movement led by E. V. Ramaswamy (EVR), popularly known as Periyar, for more than 50 years – from the 1920s till his death in 1973 – sparked strong anti-Brahmin sentiment among large sections and a Dravidian identity consciousness, which is still alive and has also entered the political mainstream through several regional political parties whose names invariably include the term “Dravida”.

In Tamil Nadu, Brahmins are generally seen as Aryan interlopers who have tried to subvert the Tamil language, their traditional religious practices, and who seized political and administrative power in the country, especially in the Madras presidency region, during and immediately after the anti-colonial struggle. At the time, there were people like Satyamurthy and C. Rajagopalachari, who was a Tamil Brahmin, philosopher and member of the Congress party. Also known as Rajaji, Rajagopalachari became the governor-general of India, taking over from Lord Mountbatten, the last viceroy of India, and later became the chief minister of Tamil Nadu. Brahmins filled administrative positions at all levels, and dominated all institutions, including the judiciary and legal profession, academic institutions, and even ruled the roost in the private sector. 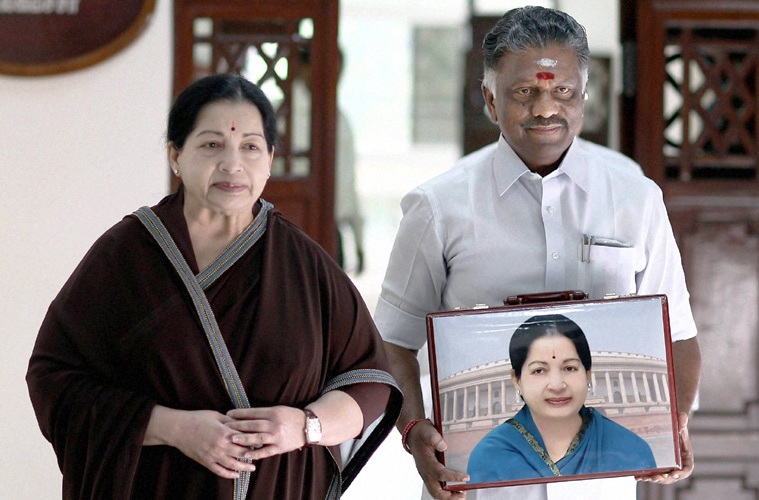 The BJP senses a political vacuum in the state after the passing away of Jayalalitha (left). It has already tried to gain a foothold in the state by propping up O. Panneerselvam (right)

It was EVR’s intellectual leadership and organizing abilities that enabled his ideas to become popular and gain the traction they did at the time, and the impact is still visible and being felt right down to the present day.

The TPDK, under the leadership of K. Ramakrishnan, has been in the forefront of an attempt to whip up more support for the Periyarist traditions. Last year, it successfully conducted a widely publicized and attended Ravana Leela, an event in which effigies of Ram and Sita were burnt to signify their opposition to the north Indian king Ram’s conquest of the South of India. A large police presence could not thwart the event.

Asked why they feel the BJP is anti-Tamil, Manoj reels off a long list of examples, ranging from environmental issues to statements by BJP leaders that, he alleges, clearly demonstrate the anti-Tamil stance of the BJP. “All over the country the BJP has made its presence in state politics. It is only here that they have not been successful,” Manoj says. “Now, they are trying to use the fractures in the AIADMK to break the AIADMK, by propping up O. Panneerselvam.

“But the TPDK along with other groups like the Dravida Viduthalai Katchi, the Tamizhar Vidiyal Katchi, Tamil Puligal, and the May 17 group will work to see that this conspiracy to enter Tamil Nadu politics through the back door will not succeed.”

Manoj points to a statement by iLa Ganesan, the former state president of the BJP and presently Rajya Sabha MP, on 26 February in the context of the opposition to the hydrocarbon extraction project near Sivagangai in Tamil Nadu. He had said, “For the welfare of a state, a district can be sacrificed, and for the sake of a district, a village can be sacrificed.” 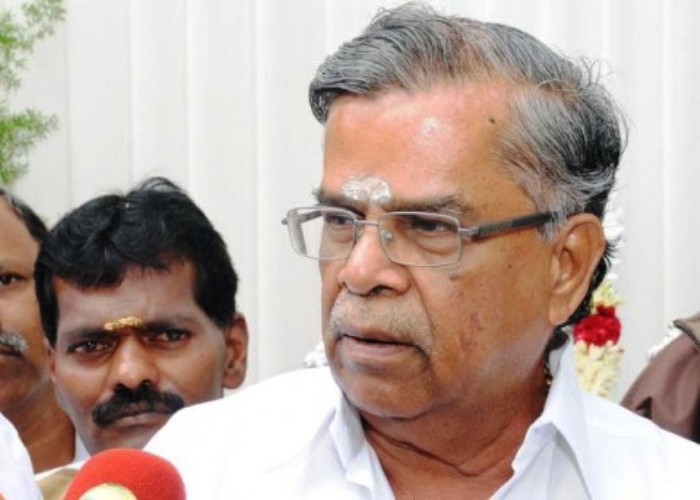 There are a number of contentious issues relating to the access and control over natural resources in Tamil Nadu. The Cauvery water issue has been a bone of contention for over a century now. As it is the only perennial river passing through the state, the Cauvery delta is the most valuable land for food production in the state. Prolonged droughts, decades of state failure to optimize its share of the waters, and increased acreage under irrigated crops has created a huge demand for water – so much so that in the northern delta area, there isn’t enough water to drink.

Manoj says two check dams are being constructed across the Cauvery – in Bhavani, by the Kerala government (to take its share of Cauvery waters awarded by the river tribunal), and in Mekedatu, by the Karnataka government (to provide drinking water to water-starved urban areas in Karnataka). Also, the Andhra Pradesh government is building a check dam across the Palar river before it enters Tamil Nadu.

How is all of this evidence against BJP’s anti-Tamil stance? According to Manoj, the Centre manages the interstate sharing of river waters and through these initiatives it trying to create a situation where Tamil Nadu will be starved of water resources.

There is a huge ongoing local struggle against the planned extraction of natural gas through fracking in the Neduvasal region. This is a fertile area with abundant groundwater and produces a variety of crops. Exploratory drilling in these areas has been going on for a couple of years now, leading to the discovery of “commercially viable” hydrocarbon reserves. The locals, however, are well aware of the downsides of the process of extracting hydrocarbons due to their experiences with the exploratory drilling. “Pollutants will enter the water table due to the drilling and introduction of chemicals, leading to fractures in the rock, contamination of ground water and the loss of fertile agricultural land. The resultant pollution will make even living here unviable as there will be no water to drink,” say the protestors. 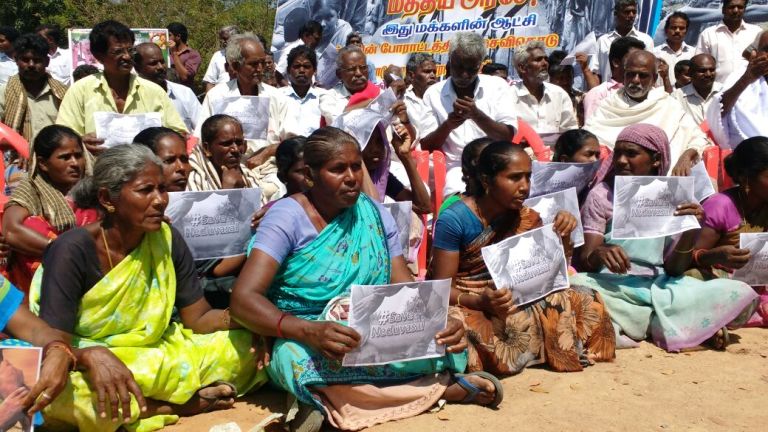 The farming community of Neduvasal, in southern Tamil Nadu, protests against the planned fracking project

It was in this context that iLa Ganeshan’s had talked about “sacrificing” a district or a village for the greater good. Needless to say, this has enraged the people.

Another important issue is that of higher education. Tamil Nadu has the highest proportion of reserved seats in the country – 69 per cent in jobs and higher education. This has made it possible for students from all sections of society to get a taste of higher education. The situation of medical education in the state is notable: there are 27 medical colleges turning out thousands of medical graduates every year, and doctors from Tamil Nadu are found all over the country and the globe. The central government has issued an order that medical colleges admit students on the basis of a national Eligibility Cum Entrance Test (NEET), modelled on the Central Board of Secondary Education (CBSE) system. Manoj says the Tamil Nadu state school system is significantly different from CBSE, and thus NEET will disadvantage students from Tamil Nadu. In the long term, imposition of an education system alien to the Tamil consciousness and values will force a gradual decline of the language and cultural identity of the Tamils.

Again, Manoj has spotted an insidious manner in which Hindi is being imposed on Tamil Nadu: the NHAI signage uses only English and Hindi, not Tamil.

“We see the BJP as a party which is intent on effecting Aryan dominance over the Dravidian civilizations of south India, and especially of Tamil Nadu. Hence, we feel they do not deserve a place in our state and do not want them to gain any kind of foothold here,” he asserts.