India’s women’s organizations have been reverently talking about the struggles led by Savitribai Phule (3 January 1831-10 March 1897). About 150 years ago, Savitribai smashed the patriarchal and anti-women beliefs and gave a new definition to women’s emancipation. She will be remembered for centuries to come. She blazed the trail for Dr Ambedkar and the Dalit women’s movement.

When, under the shade of a mango tree in his field, Jotirao Phule broke a twig from the tree into two and shaping them into pens, gave them to Savitribai and his aunt Sagunabai and asked them to write an alphabet on the ground, perhaps even he was not aware that he was laying the foundation of women’s education in India. When, for the first time, Savitribai drew an alphabet on the soil, she could hardly have known that she was actually making history.

Savitribai battled formidable odds to complete her own education. In a city like Pune, which, at that time, was in the stranglehold of brahmanical beliefs, it was next to impossible for a woman from the backward castes to acquire an education. In 1940, Savitribai and Sagunabai took admission in the Normal School, established by Mrs Michelle, a British woman, at the Chabildas Haveli in Pune, specially for girls. Savitribai took great interest in studies. She read the biography of the famous British anti-slavery campaigner Thomas Clarkson. That introduced her to the life and the struggles of the African slaves in America and made her realize that the Dalits and the women were also slaves in India and that only education could help them break free from the chains of slavery. If Thomas Clarkson could reach out to the world, Savitribai concluded, it was because he was educated.

The Phule couple started India’s first school for girls at Bhidewadi in Pune. Savitribai and Sagunabai began teaching in this school and earned the honour of being India’s first women teachers. The Phule couple was well aware that only education could open the doors to progress and justice. Only educated men and women could give the right direction to any struggle. They also realized that besides women, the education of Dalits was also necessary. That was why, on 15 May 1848, they opened a school in a Dalit settlement in the city. They got students but no teacher was ready to teach them. Ultimately, Savitribai and Sagunabai taught in this school.

The Phule couple was not only committed to education of women and Dalits but was passionate about it. Despite being perpetually short of funds, they kept on working for this cause. By 15 March 1852, within four years of opening the first school for girls in India, they had started 18 schools in and around the Pune city that provided free education to students. Education brought about profound changes in the lives of their students. Instances of two students would suffice to prove the point. Articles entitled Maang aur Maharon ke dukh ke vishay mein (About the travails of Mangs and Mahars) and Stree Purush Tulna (Comparing Men with Women), written by Muktabai Mang and Tarabai Shinde, respectively, are still an important part of the modern feminist discourse in India. When Tarabai had written this article, she was just 14. A reading of the piece would make one realize the depth and sensitivity of the thoughts of this young girl on an obscure subject like social inequality.

The curriculum of the schools run by the Phule couple was designed to ensure all-round growth of the students. It included grammar, maths, geography, maps of Asia, Europe and India and books like Marathon Ka Itihas Nitibodh and Balbodh. Even the British officers could not help but praise the curriculum. Major Candy of Pune University wrote, “The sincerity and intelligence of the students of these schools, especially the girls, are a matter of great satisfaction for me. The standard of education of these schools is quite high.” In 1892, the state education department honoured Savitribai for her unprecedented contribution in the field of education. Besides Shudras and Ati-shudras, the Phule couple believed that education was also very important for the men and women of the minority community. By appointing Fatima Sheikh, a student of one of their schools, as a teacher, Savitribai gave her the honour of becoming India’s first Muslim woman teacher. Fatima Sheikh was one of the key figures of the movement launched by the Phules.

Secularism is an essential ingredient of any movement for change and social justice. The battle can succeed only if women of all castes and religions are educated. Savitribai remained committed to this belief all her life and incessantly battled the anti-women forces.

Savitribai was not only the first woman teacher of India but she was also the leader of India’s first women’s emancipation movement. In 1892, she founded Mahila Seva Mandal, an organization devoted to the welfare of the widows of Pune city. Every 15 days, a meeting of the organization was held in which Savitribai talked to the poor and Dalit women, listened to their problems and suggested solutions. She also told them about small businesses which even illiterate women could set up and run to earn their livelihood. Savitribai was well aware that these women, who were social outcasts, were not safe. Living a dignified life was biggest challenge before them and for that, they needed to become economically self-reliant. Savitribai broke the hold of many religious beliefs and made the women aware of their fundamental rights. She inspired the women to break free from their centuries-old physical and mental slavery and to live with their head held high. She told them that a woman was not a body meant to be exploited but like men, and could have thoughts of their own and be independent-minded. Jotiba’s transformational movement changed the way society thought.

At the time, Pune was notorious for sexual violence against widows. Among pregnant widows, suicides were very common. On 28 February 1853, the Phule couple threw open Bal Hatya Pratibandhak Griha in the house of their neighbour, friend and comrade in their movement. Savitribai took the responsibility of running it. Destitute pregnant women were given shelter there without asking any questions. Arrangements were made for their delivery and children born to them were looked after. How widespread this problem was is evident from the fact that within four years, more than 100 widows gave birth to children in this shelter. Most of them were Brahmins. In 1873, the Phules adopted the son of Kashibai, one of the Brahmin widows. They named him Yashwant and brought him up. Eventually, he became a doctor and playe an important role in taking forward the movement of the Phules. The year 1874 was very important for the Phules. That year, they established the Satyashodhak Samaj, which aimed at building an alternative social system. Besides Shudras, Ati-Shudras and women, many people who believed in change and equality joined the organization. Savitribai was an equal partner in conceptualizing the outline and the philosophy of this society.

Jotiba died in 1890 and Savitribai took over the leadership of the Satyashodhak Samaj in 1893. She led the organization successfully for four years. During a famine that stalked Maharashtra in 1896, Savitribai, along with the workers of Satyashodhak Samaj worked day and night to provide relief. The next year, in 1897, plague hit Pune. While most of the residents fled the city, Savitribai and her son stayed back and served the sick. When a man suffering from plague could not get any help, Savitribai carried him on her shoulders to Yashwant’s hospital. As a result, she herself became infected with the disease and passed away on 10 March 1897. Savitribai thus continued to serve humanity till she breathed her last. 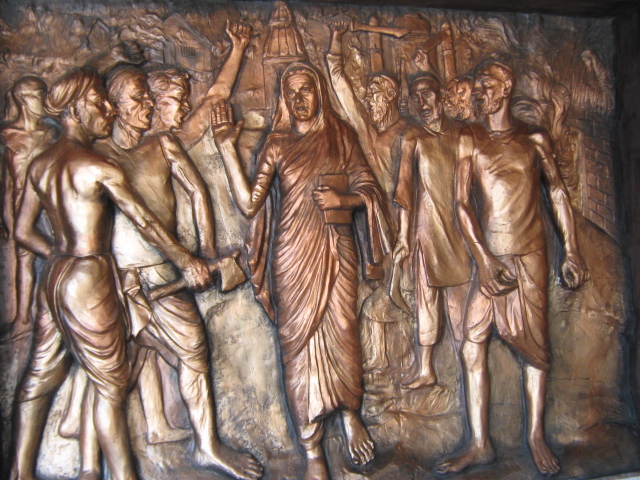 Today, when independent India is 68 years old and the right to education has been enshrined in the statute books, the women of Dalit, OBC and minority communities are still, by and large, uneducated. Almost 68 per cent of Dalit women are unlettered. These women need adequate representation in all democratic institutions right from the panchayats to Parliament. But that is not possible without a mass struggle. The Women’s Reservation Bill is still hanging fire. Sometime ago, the Rajasthan and Haryana governments enacted a law prohibiting non-matriculates from contesting local elections. This has deprived the uneducated from participation in the electoral process. Not only these governments but also the Supreme Court ignored the ground realities. It is true that the influence and reach of aggressive Hindutva has grown by leaps and bounds but Phule-Ambedkarite thinking still has a presence in the Dalit, progressive and women’s movements. It is becoming a part of the mainstream struggle and discourse. Savitribai’s struggle and her feminist thoughts can be a potent source of inspiration for women’s struggles.