Hudud Duraga and Dasain dance are an important part of tribal culture. Folktales have it that Hudud Duraga was well known as a very powerful man. It is said that when Hudud Duraga crushed a stone under his feet, the people said, “Hududia Duraga gudgu dhireem raput get [Hududia Duraga, you have turned a stone into dust with your feet]. Here “gudgu dhireem” means a very hard stone that is used in the rural areas for grinding spices. That was how Hudud Duraga got his name. Santhals, who are found today along the Indo-Nepal border and in the states of Jharkhand, West Bengal, Bihar, Odisha and Assam, also address him as Maysa. People in Nepal worship him as Dasain Bhawani. Santhals call themselves Kherwal and also “Hod Hopon” (“Hod” means man and “hopon” means progeny). But I feel that Hudud Duraga was given this name because of his valour and personality, and that the word “hud hopon” might have originated later.

According to one legend, Hudud was a shepherd who was given the designation of “Desh Paragna” (the highest post of the area) as a tribute to his valour and his contribution to society. In the Kherwal administrative hierarchy, “Majhi Hadam” (village chief) is the administrator at the village level. Godet and Joh Manjhi assist him. “Nayke” (priest) presides over religious ceremonies at places of worship. His deputy is Kudam Nayake. There are many similar posts. There are those responsible for one village, and then for many villages as a group and at the top of the pyramid is the Desh Pargana. He can be compared to the prime minister, who is responsible for taking all political decisions. Initially, Hudud Duraga taught the ways of taming animals. All this information can be gleaned from the story of his death.

When outsiders (diku) came to the banks of Sura Nai (river), there was consternation among the Kherwals. Kherwals built a “kumba” (hut) of leaves to keep an eye on them. The dikus were “charak” (white) in colour.

The stories say that Kherwals fought many battles with the outsiders (diku) and every time, the outsiders lost. Ultimately, the outsiders approached a woman who kept two girls for prostitution. One of the girls was too young to be in the trade. The chief of the outsiders sought the beautiful, older girl’s help in killing Hudud Duraga and promised that she would get as much money as she wanted in return. Accordingly, they drew up a plan and one day, Kherwals found the girl in an unconscious state on their side of the river. Those manning the kumba carried her to the village. Some people of the village wanted her turned out while others said that she should be killed. But as she was a “tirla hopon” (girl), she was spared. She was very fair, so that the villagers felt that she was not one among them but a spy. When they could not take any decision about what to do with her, Hudud Duraga was called for. At the time, he was teaching some young boys how to tame an animal. He came and announced that she would be sent back on “kunam chando holo” (full-moon night), which was “aarel maha hilow” (nine days later; in the Santhal numerical system 1 is mit, 2 is baar, 3 is pe, 4 is poon, 5 is morhoon, 6 is turasya, 7 is aiyay, 8 is irol, 9 is aarel and 10 is gel). Till then, she would live in the village. The girl was put up in the house of Hudud Duraga. Now, the house had four rooms. In one room lived Hudud Duraga, in two other rooms lived some boys (probably his disciples) and in the fourth room lived a girl. The diku charak (white outsider) girl shared the room with the other girl.

The next day, the villagers left on a hunting expedition. They returned with a pig (even today Santhals, Khadias and Mundas hunt in groups). A feast was held for the entire village. Hudud Duraga took some intoxicant (common during community feasts of Tribals). When he went to sleep, the charak girl followed and lay down by his side. As Hudud was inebriated, he did not resist and that night, both became physically intimate. Later, Hudud fell in love with the girl. 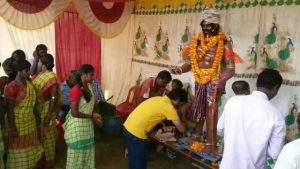 One day, Hudud called her to the forest. There, they made love, during which the girl dropped a few drops of juice from a poisonous leaf into Hudud mouth, and he died. After killing Hudud, the girl picked up his bow and arrows and dipping an arrow in the fat of the pig, shot it towards the other end of the river where the outsiders were camping. This was a signal to the outsiders that Hudud Duraga had been killed. They immediately attacked the Kherwals. The homes of the Kherwals were set ablaze and all men were slain. Only women and children were spared. When the Kherwals were leaving Chai Champa they sang this song to express their sorrow:

[O’ Chete (the name of a girl), why are you plastering the walls and the floor of the house. O’ Voyal (boy, brother) why are you cleaning the ground.]

Some say that the ancestors (men) set out disguised as girls. The stick in their hands was actually a bow and they kept the arrows hidden in the “bhooaang”. The same bhooaang is now used in Dasain dance and a guru called Bhooaang got his name from it. He is said to have been the creator of the Dasain dance. The Kherwals held an akhada (meeting) in which they performed religious rituals before marching to the battlefield disguised as women. They met a person called Budi on the banks of the Sarsuti Nai (river), who came to be known as Kamru Guru among the Santhals. 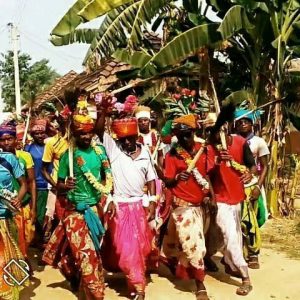 Santhals perform Dassain Dance in memory of Hudud Duraga (Maysa). It is known as a dance of sadness

Dasain Ainech (dance) begins on the 11th day of the month of Ashwin (on the Prathma just before the Durga Puja). The Dasain dancers set out on the Prathma and return home on the day of Dashmi. They go around the village dancing and singing. They mainly wear saris but in the style of a dhoti. Their headgear is also made of a sari. “Maraa Pichar” (peacock feathers) are stuck into the headgear.

In Nepal, before heading out for the Dasain Dance in the Dasain month of the Santhal calendar (that is, Ashwin and Kartik), they perform a puja of a deity known as Dasain Bhavani in Nepal.

Born into a Santhal (Kherwal) family in Jharkhand, Jagdish Tudu is a loco pilot in the Indian Railways and a prominent contributor to Tribal discourse 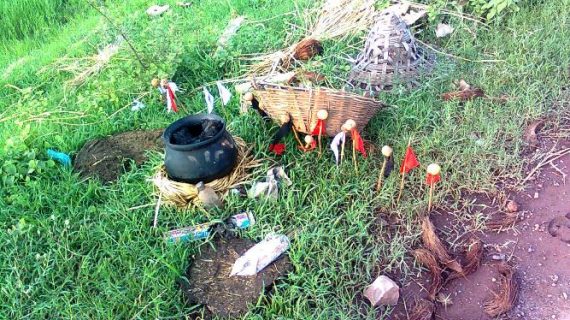 Asurs, Gonds and many other tribal communities describe themselves as descendants of Mahishasur. For them, Mahishasur is a hero who helps them tide over difficult times