It’s about the land of the Adivasis in Jharkhand. Recently, Chief Minister Raghubar Das tried to 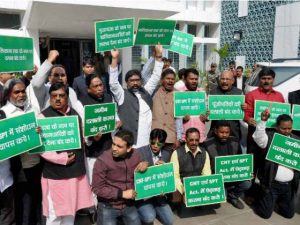 Hemant Soren, the leader of the opposition in the Jharkhand Assembly, protests at the main entrance to the assembly building

amend the Chota Nagpur Tenancy (CNT) Act 1908 and Santhal Pargana Tenancy (SPT) Act 1949 so as to secure the rights of the non-Tribals over the land of the Tribals. Despite having a majority in the Jharkhand Assembly, the chief minister went for an ordinance to this effect. However, when questions began to be raised, he introduced these proposed amendments in the assembly, where it ran into massive opposition, which took forms of protest inside the assembly unbecoming of MLAs.

His own among naysayers

Now the flames of protest have spread to the entire state and even the seat of chief minister Raghubar Das, carrying the blessings of Prime Minister Narendra Modi and Bharatiya Janta Party (BJP) president Amit Shah, has been caught up in it. Even Das’ own party colleagues, veteran Member of Parliament Karia Munda, former chief minister Arjun Munda, and the state president of the BJP, Laxman Giluwa, have pointed the finger at him. Leaders of Jharkhand Mukti Morcha and Jharkhand Vikas Morcha have also joined in the barrage of criticism. Adivasis have have taken to the street. On 9 June, the martyrdom day of Birsa Munda, Adivasis barged into and disrupted the “Modi Fest” programme being held in the BJP state office.

Now things have taken a new turn. BJP’s central leadership is now almost sure about replacing Raghubar Das as chief minister. On June 17, the party’s top leadership sent Ram Madhav, the national general secretary, to Ranchi. Madhav sat through a closed-door meeting with all the MLAs for about 4 hours. Interestingly, Raghubar Das was in Jamshedpur while the meeting was taking place in Ranchi and Arjun Munda, who is not an MLA, was  present at the meeting of the MLAs. 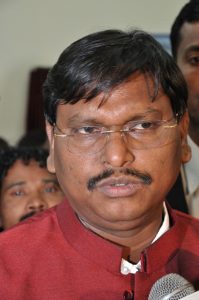 There has, though, been no official confirmation about a regime change in Jharkhand. While speaking to FORWARD Press, Kariya Munda, former deputy speaker in Parliament termed the amendments to the CNT and SPT acts a massive blow to the interests of the Adivasis. “Raghubar Das ji took such a huge decision without any deliberation,” he said angrily. “He didn’t even discuss it with the party leaders.” However, he refused to comment on the possibility of the chief minister being replaced.

The BJP state president Laxman Giluwa also admitted that this move of the state government had backfired. Giluwa is one of Raghubar Das’ confidants but the sharp criticism from Adivasis has forced him to change his stance. “The government should withdraw the recent amendments to the CNT and SPT acts,” he said.

BJP is divided on the issue of the new chief minister. Several Adivasi leaders’ names, including Arjun Munda and Laxman Giluwa’s names, have cropped up in this race. This tussle for power in the party in the wake of the proposed amendments in the CNT and SPT acts has given a new lease of life to the Jharkhand Mukti Morcha. Hemant Soren, former chief minister and the leader of the opposition in the assembly, had announced at the start itself that he would take the protests from the assembly to Jharkhand’s villages. Meanwhile, his father Shibu Soren, also a former chief minister, had raised the issue in Parliament and wrote a letter to President Pranab Mukherjee. Babulal Marandi, Jharkhand’s first chief minister and the chief of Jharkhand Mukti Morcha, has tapped into this uproar to revive his political career.

Not the first CM to tinker with land laws 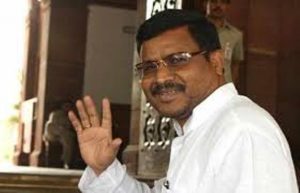 It’s not only Raghubar Das’ Jharkhand government that has eyed Adivasi’s water, forests and land. Most of his predecessors, Shibu Soren, Arjun Munda, Madhu Koda and Hemant Soren, tried in their own ways to open up tribal lands to the non-Tribals. Even Arjun Munda, who has fiercely criticized Raghubar Das’ amendments, had also amended Article 50, clearing the way for the government to acquire tribal land for public utilities.

It’s noteworthy that Birsa Munda’s Ulgulan Movement was sparked by the demand for land rights. The British put an end to the movement by introducing the CNT Act. The Act secured the land cultivated by the Adivasis against non-agricultural use while granting them limited transfer rights. When he was chief minister, Babulal Marandi brought in the stricter “domicile” policy. According to this policy, Adivasis could transfer land to only the Adivasis and that too Adivasis who belonged to (were the original inhabitants) of Jharkhand. This move was met with an all-out opposition from the non-Tribals and the BJP had thrown him out as if he was a fly in their milk. Then, last year, Raghubar Das redefined the “domicile policy” to bring the outsiders within its purview, upsetting the Adivasis.

Jharkhand angered by the proposed amendments

During the monsoon session last year, Chief Minister Raghubar Das introduced three major amendments in the Jharkhand Assembly. The first amendment concerned Article 21 in the CNT Act and Article 13 in the SPT Act, allowing Adivasi cultivators to turn their land over to commercial activities by setting up shops, hotels, wedding halls, etc. Under this amendment, the government reserves the right to assign non-agricultural uses and public utilities to the lands in question. One of the motives of the government was to impose non-agricultural tax on these lands. 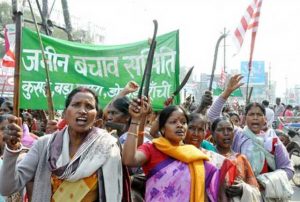 According to former chief minister Arjun Munda, “This amendment would change the definition of Adivasi land, taking it out of the purview of the CNT and SNT Acts. If this happened, Adivasis would never be able to get their lands back. Once the nature of the land changes, Article 71-A in the CNT Act becomes inapplicable and unenforceable. Besides, the government will cease to have the ownership of the land, the provision for which in the Article 50 of the CNT Act.” 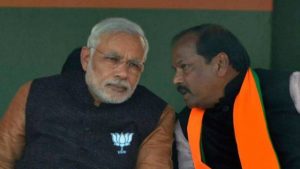 Raghubar Das’ second major amendment has been to the Article 49 (1) of the CNT Act. Earlier, the government could acquire land for only mining and industries apart from public utilities. However, the amendment allows the government to acquire land for any use once the Tribal Advisory Committee gives its approval. The chief minister is the head of this committee and the Adivasi MLAs of all parties are its members.

The “Momentum Jharkhand” investors summit that the Jharkhand government organized in February this year is significant. Major industrial groups, including Adani, Ambani, Tata and Jindal, had participated in this summit. Then the government had made many promises to the industrialists about the use of Adivasi lands. These promises have led to investment proposals worth Rs6.5 trillion. This is the reason Jharkhand had shot up to the 3rd place in the Ease of Doing Business rankings instituted by the BJP-led central government. However, now, the protests against the amendments have brought the state down to No 7 in the rankings. 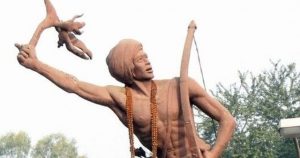 Ulgulan: Birsa Munda had mobilized Adivasis to fight for their land rights

Hemant Soren predicts a devastating consequence if the amendments go through. “The very concept of Jharkhand, which was carved out under the 5th Schedule of the Constitution, will change,” he says. “Adivasis will be cut off their water, forests and land.”

However, BJP’s top leadership has become wary of the opposition to the proposed amendments to CNT and SPT Acts, so Governor Draupadi Murmu has yet to approve them.

Meanwhile, Jharkhand’s leaders are being seen in Delhi’s corridors of power with increasing frequency. On 12 June, Raghubar Das had tried to meet Prime Minister Narendra Modi and BJP President Amit Shah. Earlier, the party had tried to resolve the crisis by inviting Arjun Munda and several other leaders over to Delhi. Despite all these efforts, the land under Raghubar Das appears to be slipping away because the BJP is just not in a mood to rub Dalits and Adivasis the wrong way – more so because Jharkhand’s Assembly Elections and the General Elections will be held simultaneously come 2019. 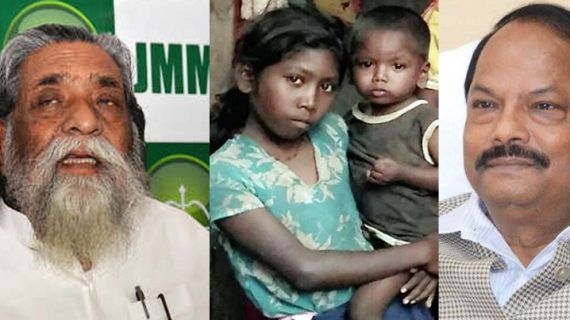 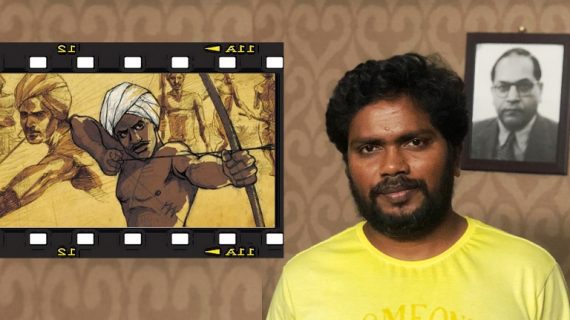 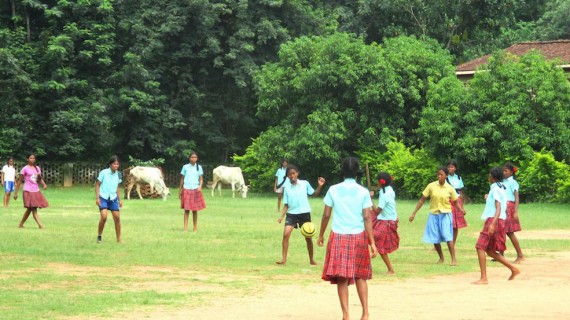