REMEMBERING PHOOLAN ON HER DEATH ANNIVERSARY

I am poor and I have observed from close quarters how the poor are subjected to atrocities. The village Pradhans have been committing atrocities against us. But now, all this needs to change. The more injustices I was subjected to, the more I forged ahead. I ensured that those who had played with my honour depart from this world. As long as atrocities are committed against women, the Mahabharata will continue.

Whenever atrocities are committed against the poor, the Eklavya Sena will have to come up with a befitting reply. The youths associated with the Eklavya Sena should never be a mute witness to atrocities against the poor. They should oppose it without bothering what the law says. Remember, only unity among the poor can secure justice to them. Today, the need is to end opulence, for once it goes, poverty will itself be eliminated.

Eklavya was our emancipator. Our exploiters severed his thumbs and sent him to the jungle. But now, times have changed. There are hundreds of Eklavyas. Today, if any Dronacharya tries to severe the thumb of an Eklavya, his hands will be chopped off.

I want to request Chief Minister Lalu Prasad, who is on the dais, to give 50 per cent reservation to women. Till the women are considered the property of others, they will continue to be subjected to atrocities. I appeal to all the young members of the Eklavya Sena to educate their daughters. They should not make them cowards. They should teach them that if someone slaps them once, they should slap him twice – irrespective of whether the person slapping the girl is her husband or her brother.

In the end, I want to say that I have no fear of jail. Till I am alive, I will continue my battle against atrocities.

Phoolan Devi delivered this speech on 18 February 1996 at Patna’s Gandhi Maidan while addressing a rally of the Eklavya Sena. Then chief minister Lalu Prasad Yadav, who was present at the event, described Phoolan as the “brave daughter of India”. The language she has used in this speech in not in consonance with the modern democratic values but it does reflect her pain. Phoolan Devi had taken the plunge into a life in the ravines after becoming the victim of the barbarism of the local Rajputs. At the time, she was a teenager. Later, to avenge the atrocities committed against her, she ending up killing 22 people on one of the bloodiest days. In 1993, she surrendered before the police. She was charged with 48 murders and spent around 11 years in jail. In 1994, the Uttar Pradesh government led by chief minister Mulayam Singh Yadav withdrew all charges against her. Mulayam Singh’s Samajwadi Party then fielded her from the Mirzapur constituency in the general elections. She won elections twice in a row from Mirzapur. In 1995, she founded her own national political outfit with the aim of uniting Dalits and OBCs to take on those who commit atrocities against them.

Phoolan Devi (10 August 1963-25 July 2001) was a dacoit-turned-MP and politician. She was born into a lower-caste Mallah family at Goraha, a small village in Uttar Pradesh. She was murdered by a casteist extremist when she was an MP 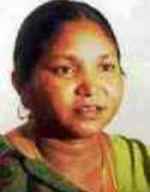