Gopinath Munde was a BJP leader of considerable stature. He was a popular people’s leader. The BJP is generally considered a party of Brahmins and Baniyas. However, Munde gave a voice to the Dalit-OBCs within the BJP. He enthusiastically joined the movement for renaming Marathwada University in Aurangabad after Dr Babasaheb Ambedkar. At that time, our organization, the Dalit Panthers, was asking: Babasaheb had been from Maharashtra, yet why was there no university in his name in the state?
In 1946, Babasaheb Ambedkar founded the People’s Educational Society. He started the Siddharth College in Mumbai. Many boys used to study in that college. They came from different communities. They worked in the day and came to the college in the evening. There were some students who came to study in the morning and left for work thereafter. Then, Babasaheb started another college at Aurangabad. It was spread over 200 acres of land. Babasaheb used to say that there should be a separate university for Marathwada. At that time, the colleges in Marathwada were affiliated to the Osmania University, Hyderabad. That was another reason why we demanded that Marathwada University be named after Dr Ambedkar. During the agitation in support of this demand, both Gopinath Munde and Pramod Mahajan went to jail with us. They wholeheartedly supported the idea.

It was due to Munde’s leadership that many OBCs joined the BJP. At a personal level, he was very affable and ready to meet people at any time. He wrote letters to the party workers and also telephoned them regularly. His popular base grew at a fast pace in Maharashtra. He soon became a very popular leader. His image was of a leader who took everyone with him. He had a major role in bringing about the recent changes in the politics of Maharashtra.

When I got an opportunity to work with him, I realized he had a great understanding of the rural areas, including the problems of the farmers, the unemployed, farm labourers, Dalits and Tribals. As much as he was aware of the miseries of farmers during famine, he was equally conversant with the problems of the residents of urban slums.

In one sense, he was a great social engineer of Maharashtra. On more than one occasion, he publicly declared that “If Athawale joins us, I am ready to give him the deputy CM’s post”. He was my great well-wisher. Before he went to Delhi on 2 June, our delegation met him and we talked to him for some 30-45 minutes.

I feel that Munde’s death is a major setback for the BJP – not only for the BJP, but a for our grand alliance. When the Shiv Sena and the BJP were together, it was called ‘yuti’ (alliance). After our Republican Party of India (RPI) joined them, we have became a ‘mahayuti’ (grand alliance). In jest, many people used to address us as ATM – Athawale, Thakre and Munde. We would also reply in the same vein: ATM is before you; withdraw as much money as you want.

With Munde, we have created a favourable atmosphere across Maharashtra. It will be difficult for the BJP to find a replacement for him. As the leader of the ‘mahayuti’, he did great work. He was respected all over Maharashtra, enjoying support in every part of the state. Whenever he travelled in Maharashtra, people thronged to meet him. I enjoyed a good personal rapport with him. In many public meetings, he used to say that when we formed a government in the state, Athawale would be a minister. “Congress did an injustice to him. His belongings were thrown out of his house. We will throw the people who did this to him out of power,” he would say.

It is difficult to believe that Munde is no more. We have demanded a CBI probe into his death. The BJP and the Shiv Sena have also made the same demand. There is great anger among the people. His demise is a great loss to Maharashtra. 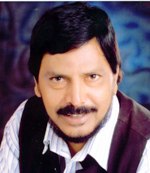