The Akhil Bharatiya Vidyarthi Parishad (ABVP) is an arm of the Rashtriya Swayamsevak Sangh (RSS). It contests students’ union elections in universities and uses its elected office-bearers to pressurize university administrations to toe its line. It is also the nursery of BJP leaders. It propagates the Sangh’s ideology on college and university campuses. It focuses on Bahujan students. However, it does not bombard them with the Sangh propaganda straight away. It first listens to their problems and persuades them to join the organization. Its members tell the students about how the Sangh and the ABVP are working towards alleviating the problems of the particular caste or class to which they belong. It sows the seeds of the Hindu-Muslim divide in the minds of the students and tells them how dangerous Muslims are for the country. 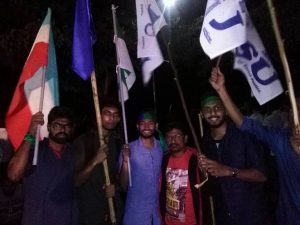 With the BJP coming to power in Delhi and the growing clout of the RSS, the ABVP is becoming increasingly aggressive. It wants to thrust the RSS’ ideology on the students. It dons the mantle of patriotism and labels those opposed to it as traitors. That has turned university campuses into battlegrounds. Clashes between students affiliated to the ABVP and those associated with leftist and Phule-Ambedkarite organizations have become common. If other student bodies invite any person opposed to the Sangh or Hindutva to speak at functions they organize, the ABVP kicks up a big ruckus and says it won’t allow the function to go ahead. The police are at the beck and call of the ABVP.

Under pressure from Union ministers and the ABVP, the Hyderabad Central University took action against Rohith Vemula and his associates, driving the former to suicide. The incident sparked nationwide protests but the guilty are still unpunished. Even Vemula’s caste was changed to ensure that the SC, ST (Prevention of Atrocities) Act did not apply to the incident. Under BJP rule, the misuse of state power has reached its zenith.

Kanhaiya Kumar, president of the Jawaharlal Nehru University (JNU) Students’ Union, Umar Khalid and Anirban Bhattacharya accused of sedition and put behind bars. TV anchors pronounced them guilty. The police used the reports of Zee News, Times Now and India TV to declare that Kanhaiya and his comrades were traitors. Some lawyers misbehaved with them. Today, you can find RSS-BJP workers everywhere. Some are TV anchors, others are editors of newspapers and still others are occupying top administrative positions. The liberal and pro-people sections of society believe that the current situation is dangerous for the nation and may lead to widespread clashes.

Whether it is Rohith Vemula being driven to suicide or Kanhaiya Kumar and his friends being accused of sedition, students of various universities were witness to the highhandedness of the ABVP. They were waiting for an opportune moment to teach the vigilantes a lesson, and in the recent students’ union elections, the ABVP, whose members were at the helm of the students’ unions of many universities, bit the dust. The ABVP has lost in Delhi University, JNU, Punjab University, Hyderabad Central University and many other universities 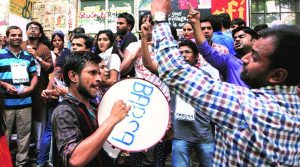 The vote share of Birsa Ambedkar Phule Students’ Association (BAPSA) has been on the rise in Jawaharlal Nehru University, New Delhi

The ABVP has been dominating the Delhi University Students’ Union for the past many years. However, the recent elections witnessed a close contest between the Congress party’s student wing National Students Union of India (NSUI) and the ABVP, with the NSUI bagging the posts of the President and the Vice-President. In JNU, leftist students’ organizations emerged victorious and the ABVP ended up with nothing. The ABVP, NSUI and leftist organizations have always had a sizeable presence in DU, JNU and Hyderabad Central University. Now, a fourth force is emerging on the university campuses. It comprises students’ organizations adhering to the ideologies of Birsa, Phule and Ambedkar. In JNU, the emergence of BAPSA (Birsa Ambedkar Phule Students’ Association) has added a new dimension to student politics and is a heartening development. Its vote share is rising. The students have voted against the ABVP and its brand of divisive politics. 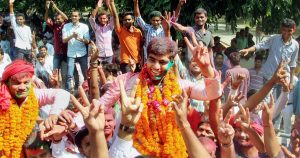 After Rohith Vemula’s suicide in Hyderabad Central University on 17 January 2016, the Alliance for Social Justice (ASJ) has been taking on the ABVP in the university. The ASJ included Students’ Federation of India (SFI), Ambedkar Students’ Association (ASA), Dalit Students’ Union (DSU), Tribal Students’ Forum (TSF), Muslim Students’ Forum (MSA) and Telangana Vidhyadhar Vedike (TVV). Not a single representative of the ABVP was elected to the students’ union. This alliance won the battle against the fascist forces. In the universities in Uttar Pradesh, the students’ wing of the Samajwadi Party defeated ABVP notwithstanding the rule of BJP Chief Minister Yogi Adityanath in the state.

The ABVP’s defeat and the victory of progressive organizations are indicative of maturing student politics and changes in the thinking of students. It shows that resentment is brewing against the economic, religious and social policies of the ruling BJP, which represents the policies and values of the upper castes and of a Hindu India. Different colours (red, green and blue) have united against the saffron of the BJP-RSS and are posing a formidable challenge to it. Ideological unity is a must for promoting democratic and secular ideals. Given that student politics in universities is indicative of the mood of the nation’s youth and their voting preferences, national politics looks set to turn against fascist religionism and the RSS. This is what the ABVP defeats portend.