Mahatma Jotirao Phule laid the foundation of the mass movement for justice, equality and liberation in modern India. He was the first person to create a strong ideological and social movement for the total independence of peasants, labourers and Untouchables – the Shudras and Ati-Shudras – and women in the country. His solutions to problems facing Indian society were comprehensive and revolutionary. Addressing social, cultural, religious and economic issues and emphasizing the role of education, he sought to bring about a fundamental change in society. The main obstacle to this transformation, he concluded, was the brahmanical (caste) system.

Unlike many of his contemporaries who were content with tweaking the brahmanical system and making it less inhuman, Phule’s approach was subversive and his goal was holistic change. He advocated a transformational ideology and dared to practice it. No other social reformer and leaders of 19th and 20th century can match Phule in practising what he preached. That is why Babasaheb Ambedkar considered Phule as his guru alongside with Kabir and Buddha.

Jotirao Phule was born in 1827 AD. He lost his mother when he was just 1 year old. His father’s cousin Sagunabai Kshirsagar brought him up. Kshirsagar was a child widow who worked with John, a Christian missionary, and took care of orphans. Only the high castes had the right to education. This was why Govindrao could not get an education, but he was determined to educate his son Jotirao. Schools then were few and appeared reserved for the upper castes. Then there were Gurukuls run by pandits or scribes. Scheduled Castes (SCs), Scheduled Tribes (STs) and Other Backward Classes (OBCs) and women couldn’t even dream of going to those schools.[1] Brahmins imposed this restriction on them. 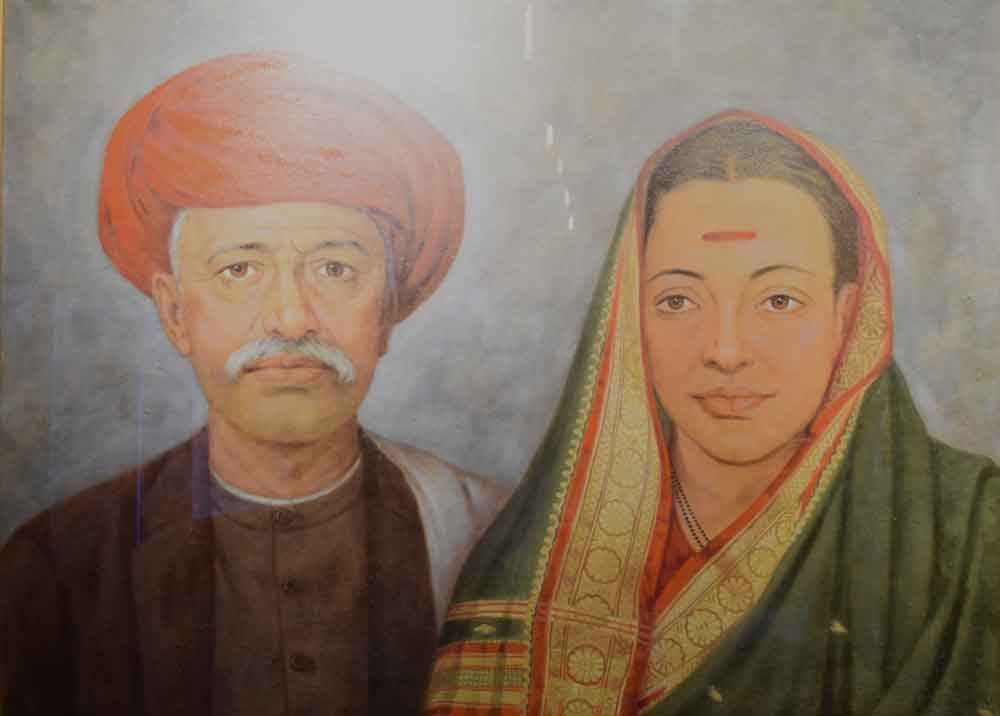 A painting of Jotirao and Savitribai Phule (All Photos: FP on the Road)

Against this backdrop, Jotirao was admitted to school. When he turned 13, though, his father Govindrao, removed him from the school on the advice of a Brahmin[2] and had him married to an 8-year-old girl from another gardener-caste (mali) family.[3] Jotirao’s aspiration for a formal education was thus abruptly cut short. But his desire for education did not diminish. He used to read in the light of the twinkling stars and moon at night.[4]

This burning desire caught the attention of two gentlemen, namely Persian scholar Gaffar Baig Munshi and British official Lizit Sahab. Munshi was of the view that religion should not be a hindrance to education. He explained to Govindrao the significance of child education.[5] Lizit Sahab, who called himself a follower of Jesus Christ, remarked that the notion of the British providing education to convert the children to Christianity is the product of some cunning mind. If that were true, Sahab asked, why would a large number of Brahmins send their children to government schools? After his conversations with these gentlemen, Govindrao realized that it was a mistake to have taken his son out of school.[6] But it wasn’t too late, as Jotirao was still a child, and Gaffar Baig Munshi and Lizit Sahab helped him get admission in a mission school in the year 1841.

The night that shook Jotirao

One day, Jotirao was invited to the wedding of one of his Brahmin friends and he obliged. As was the practice, Jotirao joined the bridegroom’s party and began walking with the crowd. Some of Brahmins who had great pride in their status saw Jotirao walking along with them. They couldn’t bear to see a lowered-caste person alongside them. One of them lashed out at him with contempt: “O’ Shudra, why are you coming with us? How dare you come with us?” This broke the young man’s heart. 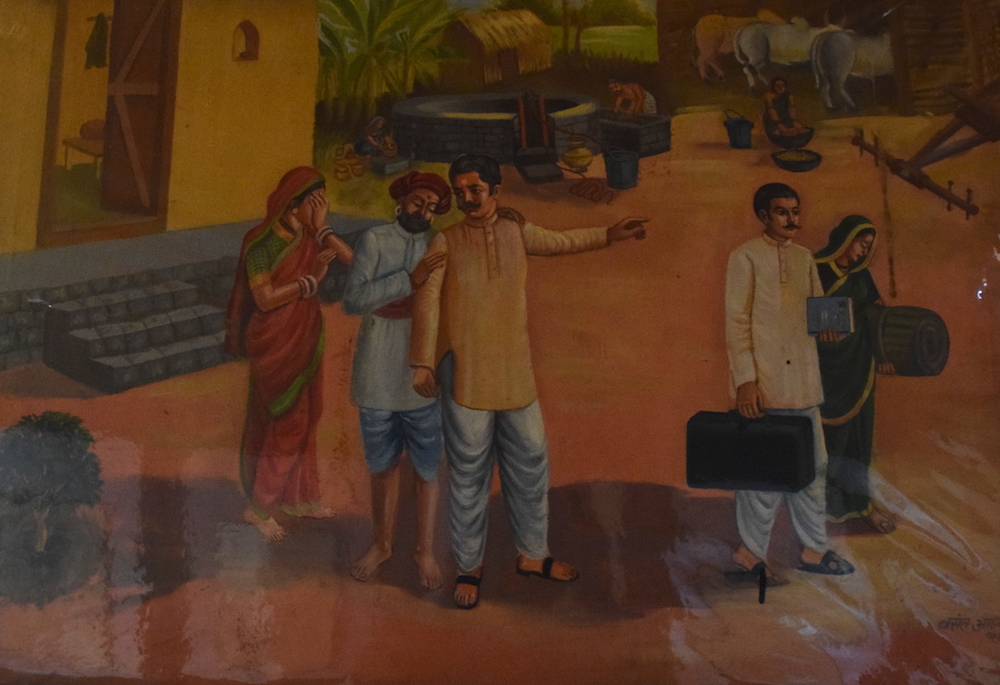 Soon, he began to inquire into who and what was responsible for this social hierarchy. To know its root cause, Jotirao studied the literature on Mahatma Buddha, Guru Nanak, Sant Kabir and others. He studied the books that have been written in English, some of which were on Hinduism. Eventually Jotirao realized what the reason for such discrimination was: After being deprived of the right to education, Shudras, Ati-Shudras and women in Hindu society were lost in ignorance, and they were unable to recognize their identity and worth. It dawned upon him that until these classes or the masses were educated, they would not wake up, and without a mass awakening, social revolution would not be possible. Jotirao did not want social reformation alone; he wanted social transformation, resulting in an equitable and exploitation-free society. That is why he is known as the forerunner of a social revolution.[7]

Jotirao noticed that women and Untouchables had been exploited for centuries. So, Jotirao first decided to open a school for the girls. He held the view that as long as women failed to get education, the society as a whole would not be educated. The way an educated mother could mould a child in wisdom and character, a thousand teachers or masters could not. Thus, he reasoned that as long the women – who made up half of the population ­– were deprived of education, India would not develop. 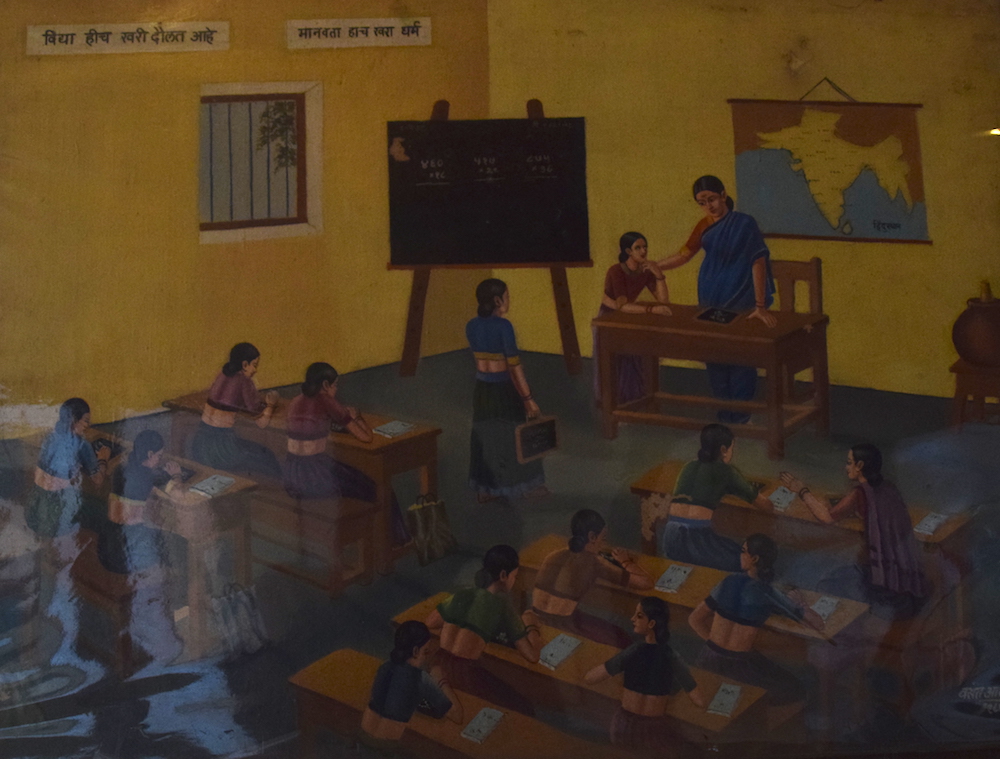 A painting shows Savitribai at work

For nearly 25 years before Jotirao started his girls’ school, Christian missionaries in Maharashtra had been working at taking education to the masses. Jotirao and his friend Govande went to see the girl’s school being run by missionaries in the Ahmednagar. Cynthia Farrar, an American lady, was in charge there. Most of the girls studying in the school were from the so-called untouchable and other backward castes. The kunbi (kurmi) and mali girls studying there had gained in confidence. This delightful experience at the school got Jotirao thinking: Miss Ferrar was neither from this country nor a relative of the girls, yet she was trying to provide education to them, while, on the other hand, the Brahmins of Pune were horrified by even the sight of these girls.

Jotirao realized that the men and women from lowered castes such as Mahar, Matang, Mang, Pasi, Bhangi and Chamar were burdened with grief and were in darkness. While talking to Jotirao and Shri Govande, Miss Farrar expressed sadness about women being kept out of education. So he took it up upon himself to improve their situation. 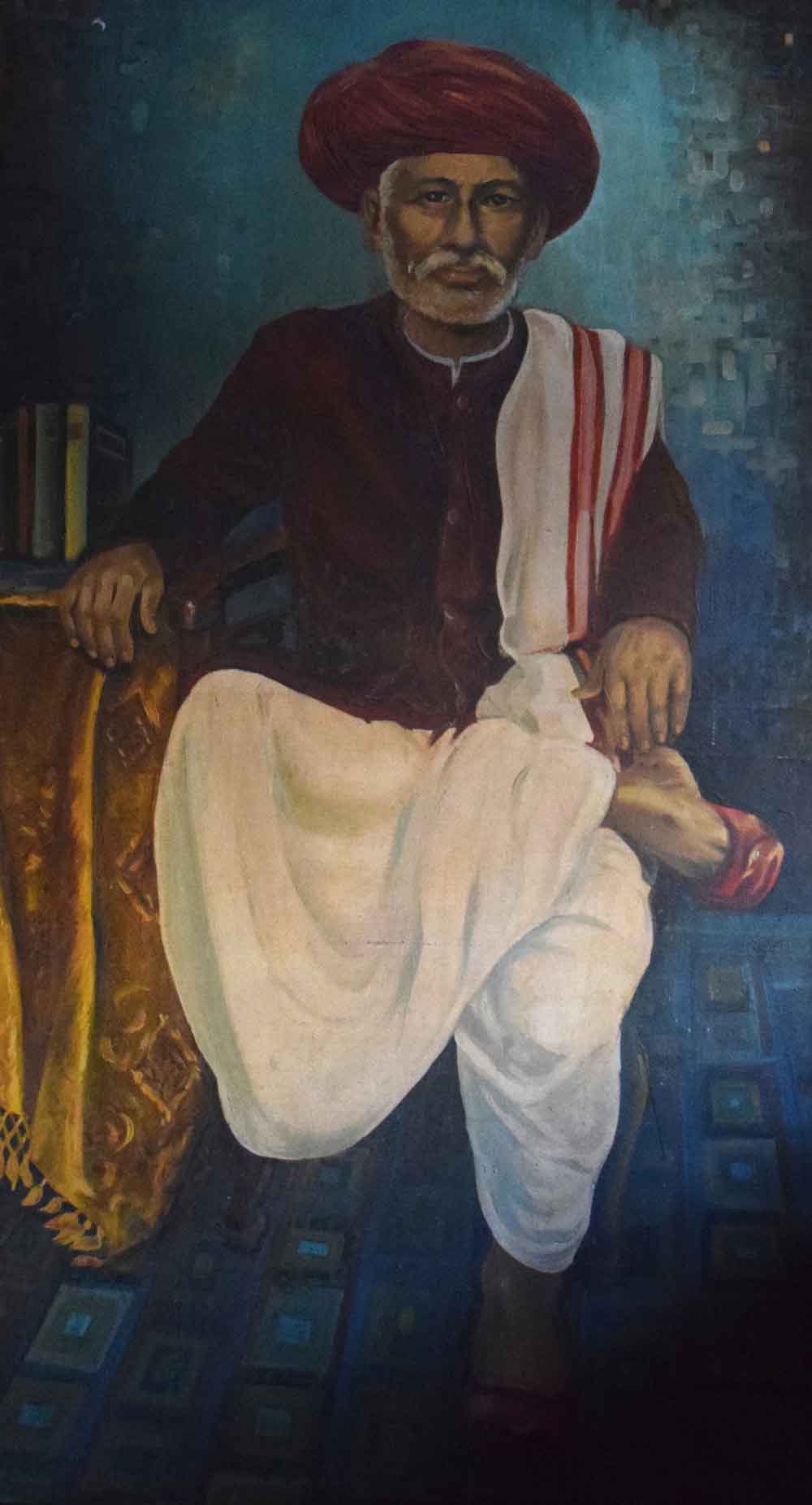 On August 1848, in Budhwar Peth, Pune, in the house of Shri Bhide, he opened his first girls’ school. On the very first day, nine girls from three different social backgrounds, namely Brahmins, Sethis, and backward castes, joined the school. A letter published in the newspaper Bombay Guardian, dated 28 November 1851, talks about this historic moment. Jotirao was 21 years old. At the time, Maharashtra’s famous social reformers Shri Gopal Ganesh Agarkar and Maharishi Dhondo Keshav, the pioneers of women’s education, were not even born. They were born in 1856 and 1850, respectively.

Jotirao told stories to the girls, played games, shared sweets and taught hygiene. It was as if he had become their mother. He used to teach reading and writing, grammar and mathematics. Soon, the number of students increased, but he was the only teacher. He needed help. There was also a lot of opposition to the running of the girls’ school. If anyone agreed to teach in the school, he was threatened and beaten, and had to endure boycott in the neighbourhood. Thus, no person could dare to teach in Jotirao’s school.

Jotirao had started to teach his wife Savitribai after visiting the missionary girls’ school in Ahmednagar. When Savitribai had learnt enough, Jotirao offered her the role of a teacher. Savitribai accepted this proposal with pleasure. And when Savitribai shared Jotirao’s burden of educating women, she became the first female teacher of modern India.[8]

However, this did not go down well with the Hindu fundamentalists. They were angered by the news that a school had been opened for the Untouchables and started a campaign to defame Jotirao. They accused him of being hell-bent on “drowning” the Hindu religion. They said he was going to become a Christian himself and would convert his students to Christianity. However, all these attacks could not deter Jotirao and Savitribai from providing education to the underprivileged.

Jotirao Phule was a doer. He faced tremendous hardship to bring change in the lives of the lowered caste. He remained faithful to his words and conviction in his action. On 5 December 1853, Gyan Prakash wrote an editorial in a Marathi magazine to the effect that Jotirao, who lifted his Shudra brothers out of the deep ocean of ignorance and gave the nectar of knowledge, suffered grief but  fought tactically, accomplishing many revolutionary feats. It was indeed a fitting tribute to the man who brought about a social transformation that affected the lives so many people.

Between 1848 and 1852, the Phule couple opened 18 schools in and around Pune. By 1855, Jotirao had also opened night schools in Pune. Workers, farmers and women who were busy working all day came to study in these schools. These were India’s first such schools. The report of the Government Education Board then acknowledged and gave due credit to Jotirao for opening the first school of Untouchables. He also opened the first library for students.

Ram Surat is a researcher and writer. He is in the process of completing his PhD from the Centre for Advanced Theological Studies at Sam Higginbottom Institute of Agriculture, Technology and Sciences, Allahabad.