India’s upper castes were aghast and dumbfounded to say the least at what they saw on 2 April 2018. Equally stunned were the mainline media and the national political parties as they witnessed wave after wave of protests that swept the nation on issues facing the deprived sections of society.

Dalit groups were protesting against a March 20 order of a two-judge bench of the Supreme Court on the Scheduled Castes and Scheduled Tribes (Prevention of Atrocities) Act, 1989, which removed restrictions on granting anticipatory bail to the accused and imposed a condition that a public servant could be prosecuted only after obtaining permission from their appointing authorities. The verdict is being widely contested by Dalits who claim that the dilution of the Act will lead to more discrimination and crimes against the backward community. A ‘Bharat Bandh’ (nationwide strike) was called on behalf of the Dalitbahujan community on April 2, demanding an ordinance from the central government to neuter the court order. The protests saw clashes between Dalitbahujan and upper caste communities in many states. To quell the violence police resorted to firing. The protests left 12 people, belonging to different communities, dead.

The strike – how it happened

The most significant aspect of this movement was its sheer spontaneity. The call for the bandh was made from an anonymous WhatsApp message. According to FORWARD Press’ Basti (Uttar Pradesh) correspondent, Ramprasad Arya, activists associated with the Bhim Army first anonymously made the call on 22 March. 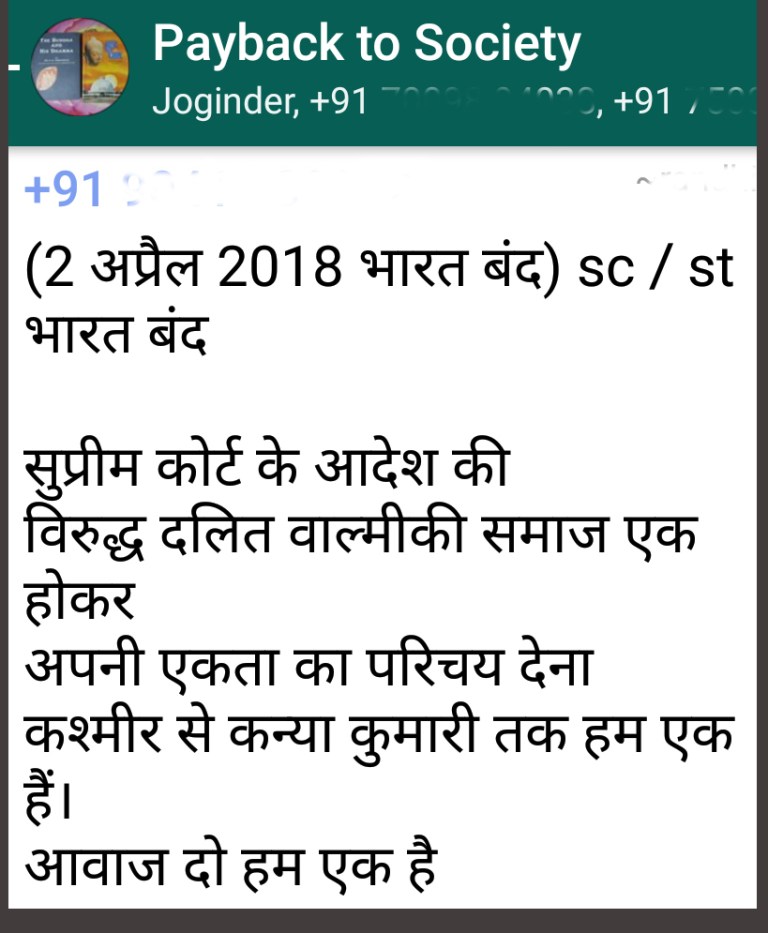 The first information reached the WhatsApp number of the Delhi office of Forward Press on 22 March. It had been circulated in WhatsApp group called “Payback to Society”. In this call for a strike, millions of anonymous social workers, along with Ashok Bharti, head of National Confederation of Dalit Organizations (NACDOR), which links up various Dalit volunteer groups, and Dilip Mandal, a journalist and popular social media activist, played a major role. 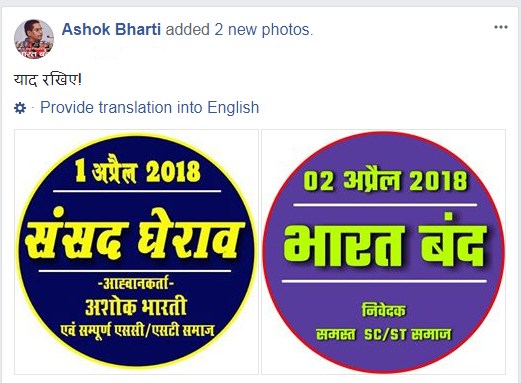 In a show of strength, Ashok Bharti issued a call on behalf of his brand-new Jan Samaan Party (JSP) for a demonstration on 1 April in Delhi and to make the bandh call a success the following day. Meanwhile, Dilip Mandal used Facebook to give the appeal a wider reach. This news of the bandh call spread as the protesters began preparing for the strike right under the nose of the mainstream newspapers and electronic channels, which failed to catch the gravity of the situation. Some newspapers broke from their slumber when the Intelligence Bureau (IB) ticked off the state officials of an oncoming large-scale protest, which in turn triggered off a near panic among the state machinery as they rushed to make security arrangements. However, it has to be stressed at this juncture that the English daily, The Indian Express, played a positive role as all of this played out. 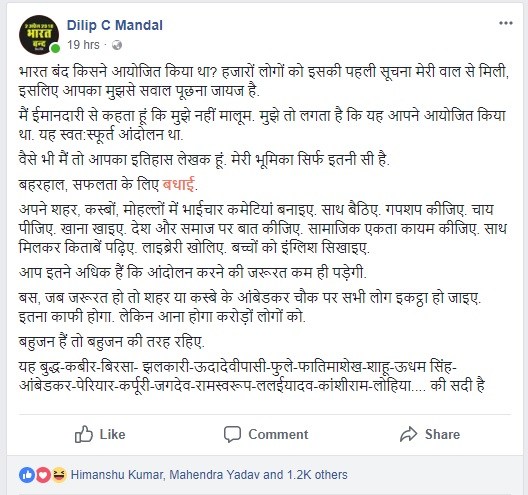 To unite or not, a dilemma hits political parties

The workers of Bahujan Samaj Party (BSP) may have wanted this bandh to be a grand success but there was no call from the party high command as such. This nationwide strike call did not see any known personalities from the top-line leadership. Along with Dalits and Adivasis, showing their camaraderie were backward (OBC) communities who were both active and vocal.

Most opposition political parties too were silent amid the calls for protest. They came out in support only after they saw that the protests had been a success. In West Bengal, Mamta Banerjee lent her voice to the Dalit chorus. The Congress, which has so far mainly represented the upper castes, announced its support to the Dalits protests only after the bandh. Yes, a large section of the Left groups supported it heartily. In many places, they took to the streets along with the Dalitbahujans. Dhirendra Jha, a member of CPI (Liberation), says, “By supporting the Dalits, people are saying that the CPI (Liberation) has become a Dalit Communist Party. But party members are saying that they are proud of this identity.” 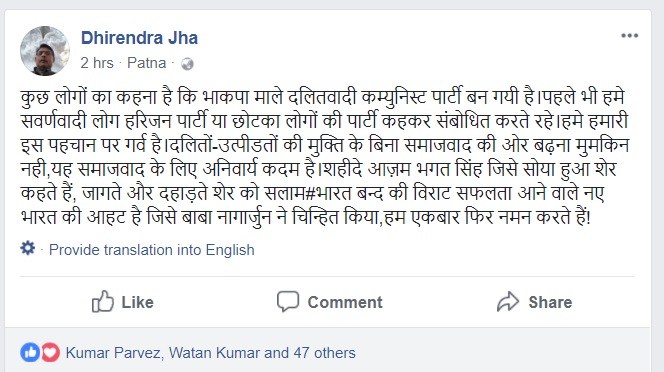 Amid the furore in Parliament following the bandh, the entire opposition came together to voice their solidarity with the Dalits. Even representatives of the central government were seen empathizing with the Dalit anger and discontent. Two things from this bandh were noteworthy. One, the majority of the OBCs, who have for centuries been called Shudras, stood with Dalits. The parties that represent the backward communities openly supported Dalits. The Rashtriya Janata Dal (RJD) in Bihar and the Samajwadi Party (SP) in Uttar Pradesh announced their support for the protesting Dalits and were completely in solidarity with their sentiments and demands. Leaders like Sharad Yadav took to the streets in support of the Dalits. In Bihar, Janata Dal United (JDU) officially distanced itself from the bandh but after the bandh was over, the Dalit MLAs of this party, including Shyam Rajak, issued a press release supporting it.

The fast-changing political equations of Uttar Pradesh and Bihar have changed the social equations of politics of these two states. The Dalit-OBCs have once again started seeing themselves as Bahujans. This identity had brought them to a realization of the massive power among themselves.

The Bharatiya Janata Party (BJP), which has been kept winning elections by playing the OBC-Dalit card, has left the egalitarian Bahujan party leaders worried. A major part of the national media has assumed the role of driving the victory chariot of the BJP. After the success of the bandh, Bahujan social activists and intellectuals welcomed in social media the solidarity of the Bahujan communities.

Dr Manisha Bangar, the national vice-president of All India Backward and Minority Communities Employees Federation (BAMCEF), and a Dalit activist, says, “By repeatedly using the ‘word’ Dalit, the brahmanical media wants to drive a wedge between Dalits and OBCs and weaken the Bahujan struggle by limiting it to the Dalits. If the brahmanical media keeps sounding ‘Dalit, Dalit’ then we should consider ourselves Bahujan – meaning OBC, SC, ST and Pasmanda Muslim.” 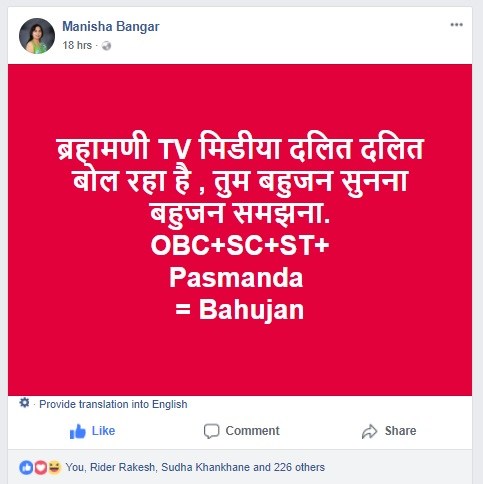 Similarly, journalists and social activist Mahendra Yadav, who hails from an OBC community, warned Shudras-Atishudras, “We should not get carried away with this hoax. We, Bahujans, should remain united.” 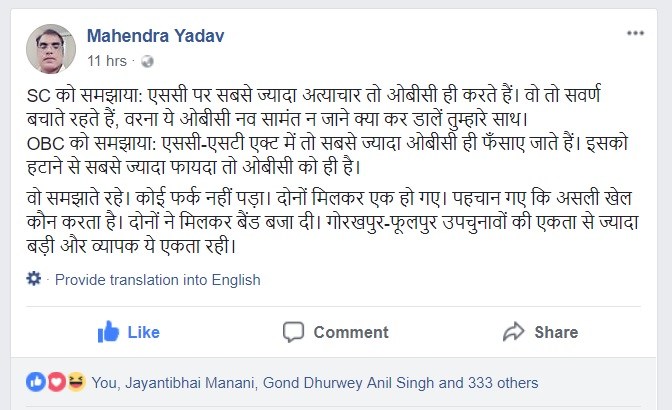 What are the implications?

What to make of all this? What are the indications in these developments for the immediate future and the long term? The issue whose immediate redressal Dalits sought as they pour onto the streets, needs to be discussed. We are all familiar with the fact that Dalits had been victims of untold violence and harassment and the practice of untouchability for thousands of years and they have had no way to save themselves. In Hinduism, this inhuman attitude towards Dalits is part of the divine law. All the scriptures, puranas and smritis declare that that is the right way to treat Dalits. The smritis have also been the laws of the land. Although the Indian Constitution declared all Indians equal, Dalits and Tribals continued to face violence, humiliation and harassment. The need for a stringent law was felt to protect the Dalits and Tribals from this situation to which they were subjected. That is how the Scheduled Caste Scheduled Tribes (Prevention of Atrocities) Act was passed in 1989 and was further strengthened in 2016. This act provides for immediate filing of the FIR against and the arrest of anyone who ill-treats a member of the Scheduled Caste and Scheduled Tribe on account of them being an SC or ST. The Act does not admit applications for anticipatory bail for the accused. This provided legal protection to SC and ST communities and was meant to create the fear of the law among those who ill-treat SCs and STs or believe it is their right to ill-treat the SCs and STs. The painful truth is that convictions under this law have been negligible. Under the SC / ST (Prevention of Atrocities) Act, only 2-3 per cent of cases have resulted in convictions and punishment. The accused in 97-98 per cent of cases have been acquitted. Even those who have masterminded the massacre of Dalits have either been acquitted or the matter is pending in the Supreme Court. It is equally true that atrocities against SCs and STs have increased in the recent years by about 70-90 per cent. In most cases, the police do not even file the charge sheet. Despite its poor track record, the law has been most protective shield for these communities against atrocities.

On 20 March 2018, a two-judge bench of the Supreme Court gave its verdict in a case related to this law. This verdict has almost been taken away the protective shield over the SC / ST communities. The Act exists on paper, but it has been rendered toothless in practice. As a result of the Supreme Court’s verdict, the FIR cannot be registered under this Act against an accused without examination of the case by an officer at the level of the Deputy Superintendent of Police (DSP). Even Faizan Mustafa, vice-chancellor of the NALSAR University of Law, has made this observation. Also, the court has made provision for anticipatory bail. We all know that the accused under the SC / ST Act belong to influential communities and are financially strong, hence they can easily secure anticipatory bail. While roaming free, the accused can easily force the accuser to withdraw the case. The court also ruled that an FIR under the SC/ST Act cannot be filed against any employee or officer without the permission of the appointing authority or body. The practical consequence of this verdict will be that hardly any FIR will be lodged against a government official under the SC/ST Act.

While the present resentment of the Dalit communities is the decision of the Supreme Court on the SC/ST Act, there is a larger background to it. It is after Khairlanji that the Dalits began poured onto the streets without worrying about an organization or a leader. The death of Rohit Vemula, the violence of Una and Shabbirpur (Saharanpur) and the killing of a Dalit youth in Allahabad had also brought people out onto the streets. The recent decision of effectively doing away with reservations for teachers in institutes of higher learning has increased resentment and discontent. The accumulated anger over thousands of years has also found expression. In the modern era, North India has probably never seen so many Bahujans protesting in the streets.