Researchers belonging to the Other Backward Classes (OBCs) will be awarded 1000 fellowships by the central government. An advertisement to this effect has been issued. The UGC has announced National Fellowships for students of Other Backward Classes for the academic year 2018-19. This will enable various researchers doing their MPhil and PhD courses to avail financial support. The awardees will be selected by an expert committee constituted for this purpose. This committee will select researchers on the basis of merit. The UGC’s official website carries more information. It is to be noted that in order to take advantage of this scheme, researchers will have to apply within two months of the publication of the advertisement.

It is noteworthy that the central government has taken a big step for the OBCs by granting constitutional status to the National Commission for Backward Classes and by declaring that the enumeration of the OBCs will be done separately in the census to be conducted in 2021. OBC social workers and intellectuals have been making both these demands for a long time. 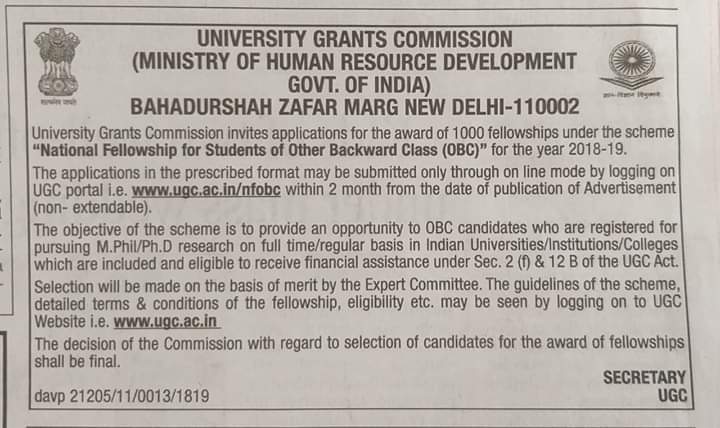 The advertisement issued by the UGC

Earlier, in 2008, the UPA Government led by Dr Manmohan Singh had announced the Rajiv Gandhi National Fellowship for Scheduled Caste (SC)/Scheduled Tribe (ST) researchers and the Maulana Azad National Fellowship for minority researchers. Under this fellowship plan, it was announced that every researcher would be entitled to 16,000 rupees per month. The current government has increased this amount to 30,000 rupees per month.

When the UPA Government had announced fellowships for SC/ST researchers, a demand was also made by an organization asserting the rights of the OBC students. A sit-in was staged outside the Ministry of Human Resource Development. Many OBC MPs including Sharad Yadav, Rama Devi, Ganesh Singh, Captain Jay Narayan Prasad Nishad and others participated in this sit-in, but no initiative was taken by the incumbent government.

When the Narendra Modi government came to power, it was stipulated to offer fellowships to the OBC candidates. Initially, the government announced the National Scholarship scheme for 300 OBC scholars, but this number was deemed insufficient. The demand for increasing this number had been gaining momentum ever since. 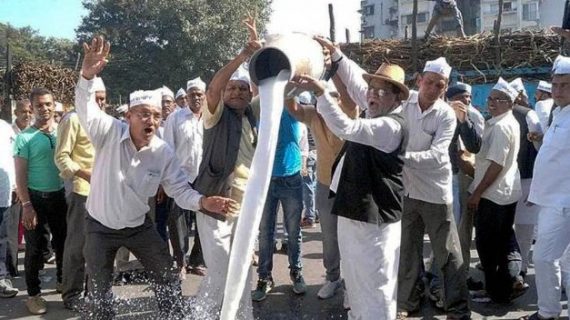 Gujarat’s peasants to confront government with their plight

Despite the tall claims of Gujarat’s development, as many as 2,766 of the state’s farmers have committed suicide between 2003 and 2016. Like in Madhya Pradesh, farmers have intensified their agitation here. On 21 June, the World Yoga Day, they plan to hold ‘upvaas’ (fasting) yoga 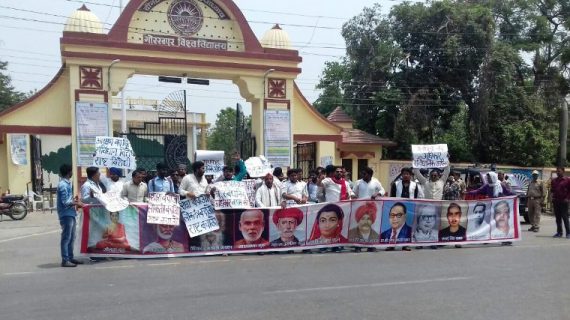 Some OBC teachers of the Gorakhpur University had questioned the process of appointments to the teaching posts in the varsity. They had pointed out instances of favouritism and nepotism. The varsity administration is now taking disciplinary action against them. Forward Press reports