Primitive tribes were the harbingers of socialist thinking in India and the Bahujans took it forward. Bahujans means the castes that were branded as Shudras and Ati-Shudras by the brahmanical system. Primitive society was matriarchal and gender equality informed life. Not only Vedic literature and Manusmriti but also texts written before and after them amply testify to this feature of primitive society. The Rigveda (7-6-3) describes the ancient socialist thinkers of India as “the foolish, faithless, rude niggards, without belief or sacrifice or worship”. In Brahmasutra (1-1-1), they have been described as “prakrat janah [uncivilized people]”. The Shantiparva of the Mahabharata talks of a socialist thinker called Charvak being burnt alive after branding him as an Asur. The Bhagvad Gita (15-7-8) says that the Asurs are those who believe that “The world is without … any basis, and without a God. It is created from the combination of the two sexes.” This means that the Asurs had a scientific explanation for the origin of the world. Almost all Upnishadas and Puranas associate egalitarian and materialist thought with the Asurs. It was the Aajivak (Shramik) and Lokayat (Lokmat) philosophy, which, through Buddha, reached the subaltern poets of the medieval era. The Buddhist philosophy, through its principle of pratityasamutpada (cause-effect principle), described individualism as the “greatest knowledge” and negated the Varna system that was based on inequality. Later, Kabir said that those who do not have love in their hearts are of no use to this world.[i] Raidas elaborated on the concept of socialism in Begumpur.[ii] 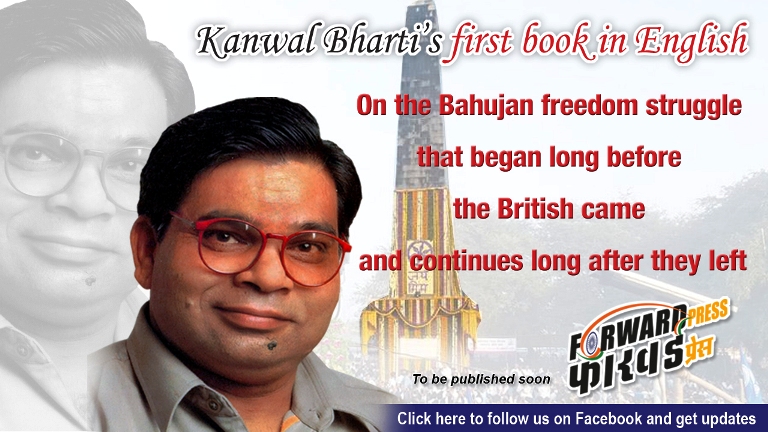 After their arrival in India, the Aryans launched a counter-revolution against this socialist stream of thought. Through deceit and coercion, they suppressed and crushed the intellectuals advocating socialist thinking and had them murdered. As a result, for a long time, India was under feudal rule. Today, feudalism has joined forces with unbridled capitalism to stage a counter-revolution, aiming to obliterate the revolutionary stream of the Bahujans. Dr Ambedkar has given a very interesting and thought-provoking description of this counter-revolution in his Revolution and Counter-Revolution.[iii]

Christians and Muslims came to India and the religious and social revolution they had initiated strengthened the egalitarian ideology of the Bahujans. The “echo” of this ideology was still audible to Tulsidas, who lived almost a century after Kabir. He wrote many counter-revolutionary texts to negate the Bahujan revolution. That is the reason Tulsidas is considered the great poet who saved Hindutva. He abhorred the egalitarianism of the low castes and admonished them in Ramcharitmanas. For around 200 years after Tulsidas, we do not hear of any Bahujan egalitarian thinker. But that does not mean that the Bahujans had given up or given in. Had it been so, Tulsidas would not have written, “The Shudras have become so daring as to say that they are equal to us.”[iv] This shows that the stream of revolution had not run dry; it was flowing, but the chroniclers of history did not record its presence. It is not difficult to dig out the thinkers behind this stream of revolution. It demands only some hard work and sincerity because the stream is present in the form of resistance in the counter-revolutionary literature.

About 300 years after Kabir, India’s indigenous socialist revolution takes place again. That was the time when a Hindu revivalist movement was under way to protect Hindutva from the onslaught of Western philosophy. Though the stream of revolution flowed unabated it could not counter the counter-revolutionary stream that enjoyed the complete backing of Hindu moneybags. But the Shudras and Atishudras were up in arms not only against social discrimination but also for building their identity and establishing equality in every state and region. The movements for Hindu revivalism and counter-revolution neither deterred nor influenced these struggles. On the contrary, the struggle of the Shudra and Atishudra castes for equality made revivalist leaders, especially the Brahmins, fearful and were forced to declare their opposition to untouchability even if just for the sake of it.

I don’t want to say anything more about this book except that it would take you through the evolution of Dalit thinking into Bahujan thinking. This is also the history of Bahujan thinking, which was ignored by the mainstream thinkers. The varna system is an identity-based system, which identifies the Shudras as a class of slaves and servants. This identity was humiliating. The 19th-century witnessed struggles throughout India for freedom from this identity and for establishing a new, respectful identity. You will get a bird’s-eye view of this struggle in this book.

One more point before I conclude. If the Brahmins in India are getting away with branding the Bahujans as enemies and villains and indulging in their character assassination on the pretext of cultural festivals, it is because they have kept the Bahujans in the dark about the history of the struggle of their ancestors. The Bahujans were humanist, egalitarian and just rulers and were bitter enemies of the brahmanical varna system, opposing the practice of animal sacrifice in religious events and imperialist policies. The Brahmins had them killed through deceit and wove myths to obscure the truth and brand them as Rakshasas and Daityas. I write about all this in this book.