Perhaps, the most popular image of Dr B.R. Ambedkar is that of him holding the Constitution of India under his arm. He was never photographed in the act, yet this image can be found everywhere and takes multiple forms such as posters, stamps, holograms or statues. This powerful representation celebrates the role of Ambedkar as the chairman of the Constitution Drafting Committee. It has also been used very recently to depict Ambedkar as a devoted servant of the Indian nation and to endorse political movements that are far removed from Ambedkar’s own political interests, such as the Hindu right. I find this quite problematic. While Ambedkar’s role in the writing of the Constitution should never be forgotten, his years as a radical activist and critic should be remembered, too. It is strange that Ambedkar is depicted holding the Constitution and not, for instance, Annihilation of Caste or The Buddha and his Dhamma (he could also be remembered for burning the Manusmriti!). Ambedkar’s activism includes things that may not sit well with the narrative of the Hindu nation, but it is crucial that such activism stay with us. More importantly, we should also understand why the Constitution has been placed under Ambedkar’s arm and why he is remembered that way.

The reasons behind Ambedkar’s decision to serve as the chairman of the Constitution is an issue that has been greatly misunderstood. The popular imagination of this event claims that Gandhi, full of wisdom and generosity, suggested Ambedkar’s name to Nehru. Even Jabbar Patel’s film on Dr Ambedkar, which is otherwise historically accurate, subscribes to this view. But a closer look at this period reveals that Gandhi actively obstructed Ambedkar’s becoming the chairman of the Drafting Committee. This was not surprising as Gandhi and Ambedkar had a confrontational relationship since the 1930s over political representation of Dalits, culminating in the Poona Pact of 1932. At the time, Gandhi claimed that Dalits should be imagined as “Harijans”, a concept that emphasized their “Hinduness”. Ambedkar, on the other hand, argued that Hindus were the real oppressors of Dalits and it was only through a separate electorate that the latter could make their voice heard. In the 1940s, the differences between Ambedkar and Gandhi were still unresolved.

Ambedkar was in a very difficult political situation in the years prior to Indian independence. In his view, the Poona Pact ensured that Dalits would never gain enough political power to change their circumstances. For Ambedkar, a new independent government would mean Dalit serfdom and suffering. This feeling had some substance. The British quietly retired the support they had given to Ambedkar throughout the years, as a consequence of the Second World War and as a way to appease Congress protests. Similarly, the Muslim League’s pressing demands for Pakistan left Ambedkar politically isolated. This is what made Ambedkar look for support for the Dalit cause beyond India. He toured England and wrote letters to a diverse group of international leaders across the political spectrum that included the African American sociologist and civil rights activist, W.E.B Du Bois and even Winston Churchill. Similarly, Ambedkar published a number of books, meant primarily for an international audience, describing the way Hinduism and Congress oppressed Dalits. One such book was What Congress and Gandhi Have Done to the Untouchables, published in 1945.

Gandhi did not turn the other cheek. Instead, Gandhi urged K. Santhanam and C. Rajagopalachari to reply to Ambedkar’s book. In 1946, Santhanam and Rajagopalachari published Ambedkar’s Attack and Ambedkar Refuted respectively. Both books claim that Ambedkar was not the true representative of Dalits and that he had no real political power over them. In the same way, Gandhi warned Vallabhbhai Patel about dealing with Ambedkar. In 1946, Ambedkar and Patel had begun to discuss the future of Dalits in independent India. Ambedkar wanted to increase political reservations, while Patel saw an opportunity to bring one of the Congress’ most fierce critics into the ranks of the party. On hearing about this discussion, on 1 August 1946, Gandhi wrote to Patel claiming that Ambedkar could not be trusted as “one has to be very careful indeed when dealing with a man who would become Christian, Muslim or Sikh and then be reconverted according to his convenience”. In short, it is quite unlikely that Gandhi endorsed Ambedkar as the Chairman of the Constitution Drafting Committee.

The Congress’ reasons for having Ambedkar in Nehru’s government were more pragmatic. On the one hand, Ambedkar’s political power diminished dramatically after Independence. For instance, not only did Ambedkar lose his seat in the Constituent Assembly after being elected from Bengal, but he also saw Jogendra Nath Mandal, key to Ambedkar’s election, leave for Pakistan. Ambedkar faced difficult choices under these conditions. He could return to Bombay and try to regroup, or he could attempt to change the system from within. Ambedkar chose the latter. On the other hand, the Congress and Nehru saw an opportunity to placate the criticism against the new government. As one may remember, Nehru and Patel were on the offensive to nullify any type of dissent in India whether it was from Dalits, Muslims or the princely states. Aware of Ambedkar’s precarious situation, the Congress, via Rajendra Prasad, arranged the election of Ambedkar to the Constituent Assembly as a substitute for M.R. Jayakar. In sum, Ambedkar agreed to join Nehru in the government to secure some rights for Dalits in independent India.

This, however, came at a price. Nehru expected that Ambedkar would speak in favour of a strong and united India and to encourage any Dalits remaining in Pakistan to relocate. Similarly, Nehru insisted that Ambedkar refrain from any criticism of the Congress. For instance, when, in April 1948, Ambedkar voiced some discontent against the Congress, Nehru swiftly wrote to Ambedkar and warned him that being part of his Cabinet implied having “a certain goodwill towards the Congress or at least an avoidance of anything that might be construed as an attack on the Congress”. Thus, more than an act of goodwill, Nehru’s decision to invite Ambedkar was a way to kill dissension against his new government.

After concluding his role as the chairman of the Drafting Committee, Ambedkar became quite critical of involvement in such an endeavour. He was not sure whether the Constitution would make a difference to the lives of Dalits. The results, as we see them today, are indeed mixed. Untouchability is still affecting millions of people in India and the Constitution has done little to prevent it. In contrast, the image of Ambedkar carrying the Constitution has become a symbol of Dalit unity and empowerment. While this should not be forgotten, the history behind this symbol needs to be contextualized. The image of Ambedkar holding the Constitution could also be used as a powerful tool in favour of a political establishment shaped by caste, as a way to depict him as a faithful servant of the nation. To depict him only as the “architect” of the Constitution is not enough. Ambedkar must be remembered and celebrated as a critic of caste, untouchability, social injustice, the Congress and Gandhi. 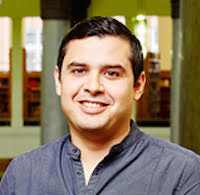 Jesus Chairez is a lecturer in History at the University of Manchester, in England. He holds a PhD in History from the University of Cambridge. His doctoral dissertation focused on the concept of untouchability as a political category and the political thought of Dr B.R. Ambedkar. While studying for an MA in South Asian Studies at El Colegio de Mexico, Chairez was introduced to untouchability and Dalits in India