On 24 March, Tuesday, 8pm, Prime Minister Narendra Modi announced a 21-day nationwide lockdown that would come into effect four hours later, that is, the following day. This came on the heels of a “janata curfew” on Sunday and a weeklong lockdown announced by the Delhi government on Sunday evening.

That 8pm speech centred on the coronavirus, which had infected and taken thousands of lives in China and Europe and which in India had also shown signs of triggering an epidemic. He had delivered a similar speech on 19 March, Thursday, evening, announcing the Janata curfew. On both occasions, he was supposed to be speaking to the whole country but it felt like he was addressing only the middle class and above. Step out on your balconies and clap, clang plates to honour the doctors and nurses working in the front lines, he said during the janata curfew speech.  To stop the virus from spreading, don’t even think of stepping out of your homes, he said in this “21-day lockdown” speech. It didn’t occur to him that a good chunk of the population lives in slums, several people crammed into one little room. The large homeless population would have never crossed his mind. Modi had conveniently forgotten millions of migrant labourers who lived on daily wages, hand to mouth and that no employer owed them a paisa in addition to what they were paid after a day’s work.

So the daily-wage labourers, rickshaw pullers, even autorickshaw drivers found themselves on the street the next day. Their employers, their landlords had thrown them out. They had no money to buy food and no transport to get home. A lot of them set out on foot from Delhi to Uttar Pradesh and Bihar, from Mumbai to Rajasthan. They hoped to cover the hundreds of kilometres in a few days. Three of them managed to retrofit a pushcart (thela) with a scooter engine and travel all the way from Delhi to Madhubani – a distance of 1100 kilometres. People offered the trekkers food on the way; someone opened their hotel to them. State governments had already swung into action. Community kitchens were opened in Kerala and Delhi and arrangements for their accommodation were being made in Mumbai.

On 26 March, Union Finance Minister Nirmala Sitharaman announced a Rs 1.7 lakh crore package to help the poor during the lockdown. It was too little, too late, especially for those migrant labourers who had already begun their journey on foot. They feared dying of hunger before being infected by the virus.

The next day, when the Reserve Bank of India announced some measures to cushion the economic impact of the lockdown, Modi tweeted, “Today RBI has taken giant steps to safeguard our economy from the impact of the coronavirus. The announcements will improve liquidity, reduce cost of funds, help [the] middle class and businesses.” He appeared oblivious to the caravans of labourers on the move on the highways. 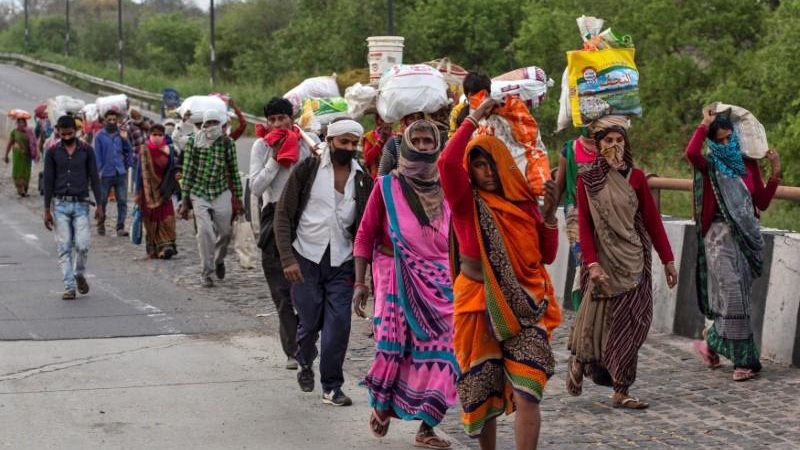 On March 28, a group of concerned activists led by economist Jean Dreze issued an appeal for relief to those whose lives had been pushed to the brink by the lockdown. It was signed by some two hundred activists and intellectuals, including Prashant Bhushan, Ramchandra Guha and Harsh Mander. “This decision, taken without proper planning, completely overlooked the disastrous impact it would have on 90 percent of our labour force … We make this urgent plea to the Central Government to pay heed to the situation immediately. The government must use the network of anganwadis, panchayat bhavans, government schools, government colleges, railway stations, bus stations, community halls, block offices, district headquarters, etc to set up feeding centres to arrange free cooked food, medical care and sanitation. Foodgrains to the tune of 585 lakh metric tonnes are available in godowns of the Food Corporation of India (FCI) and Central Warehousing Corporation (even before the wheat harvest). Some of it can be used to prepare cooked meals and/or take-home rations in these centres. This assistance should be available to all unconditionally, without any paperwork. This will still leave more than enough food in the godowns to fulfil the Finance Minister’s announcements and maintain adequate buffer stocks.

“We also urge the government to immediately arrange for sanitised bus and train services to enable stranded workers to reach home safely. Others trapped at their distant workplaces must be assured of a secure living space with enough food, soap, sanitary pads and medical care. This is a national emergency and lakhs of people are in danger of perishing in hunger and trauma. We therefore make this urgent appeal for an immediate response to the humanitarian crisis, to prevent it from snowballing further.”

Prime Minister Modi still hasn’t spoken on the exodus of daily-wage labourers from the cities. But the buses of the Uttar Pradesh State Road Transport Corporation have begun revving up their engines at the bus stations. Around a thousand of these buses have been deployed to ferry the daily-wage workers to their respective districts. The queues of the people waiting to board these buses packed the roads close to the bus station and stretched for about 2 kilometres. A lot of them didn’t even have money to pay for the fares. And a lot of them have to travel beyond Uttar Pradesh, to Bihar and Bengal. How will they get home? 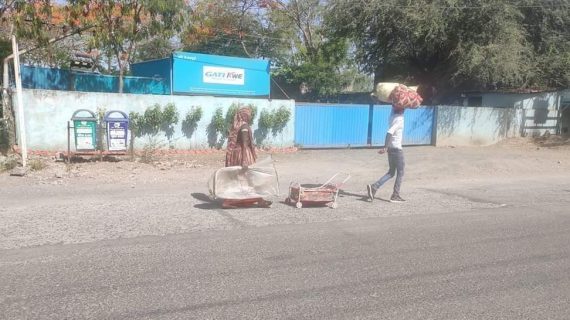 Heart-rending exodus story #?: An Adivasi couple and their empty pram

A couple who used to work in a brick kiln are trudging along the highway in Madhya Pradesh. They have lost their six-month-old son during the journey but they believe home, hundreds of kilometres away, is in sight 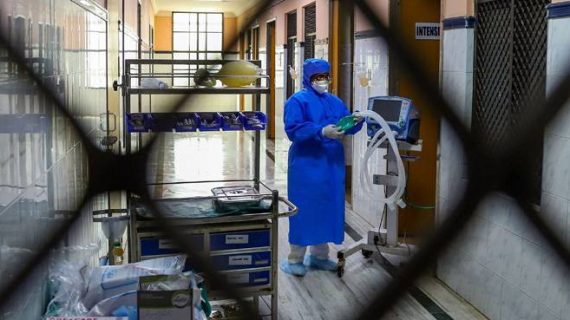 How NCR’s nurses are struggling with an inhospitable lockdown

The lockdown has caught the hospitals off guard too and it’s the nurses and other junior health workers who have been facing the brunt of the consequences. In the war against the coronavirus, the foot soldiers stand deeply exposed, finds Goldy M. George 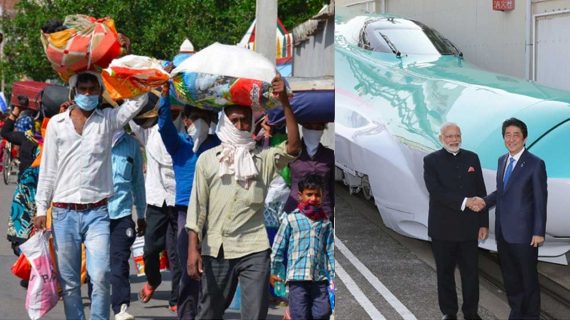 A saffron-corporate war on the Dalit, OBC and Adivasi working class

As the central and state governments rush to conjure a business-friendly climate in this time of coronavirus, Shankar V. writes that a ‘self-reliant India’ cannot be built on foreign capital – certainly not by scrapping labour laws in a bid to attract foreign capital