How can you compare one society with another? How can you say one is better than the other?

Why would Phule say the Brahmin-worldview society of his day was a thousands of years old “prison house”? Why would he want to kick open the doors of that prison house and walk out into another world? Why did Phule desire another way to organize society, and another way to live life?

Does anyone have a reason to say one culture is “better” than another? Is it just a matter of each person’s preferences, their personal likes and dislikes? An insight from D. Moynihan can help us, I think.

Daniel Moynihan (d. 2003) was a US Senator, Ambassador to the UN, and Ambassador to India. He was very involved in research and legislation for the problems of the poor. Besides being a politician and a diplomat, Moynihan was a professor at Harvard University. Professor Moynihan was known for his straight talk. Once he said: “Everyone is entitled to his own opinions, but to not his own facts.”

Opinions are statements that don’t always have evidence to support them. Facts are evidence based. Opinions are personal – they express a personal conclusion or thought. Facts are public – they can be seen and examined by everyone.

It may be your opinion that the truck directly approaching you will not hit you. But after it smashes you, everyone can gather around and examine the fact of your crushed body lying on the ground. And then, they can even give their conflicting opinions of whether you will live or die. But even those opinions will soon be open to examination as to the facts of the situation.

Since the publication of Underdevelopment Is a State of Mind by Lawrence Harrison in 1985, there has been growing attention to data-based comparisons of global cultures and countries.

For example, Argentinean sociologist and historian Mariano Grondoña developed a system of cultural categories (typology) to analyse what he painfully called his country’s “disappointing history”. He presented his Cultural Typology of Economic Development as a clarification of his conclusion.

Grondoña was mindful that his conclusions were controversial. For his opinion contracts the opinions of cultural relativism that is prevalent in the thinking of so many. Cultural relativism is the view that all cultures are essentially equal. And also, that all comparative value judgments about cultures and societies are equally invalid. In other words, all cultures are good. And no one can say one culture is better than another. 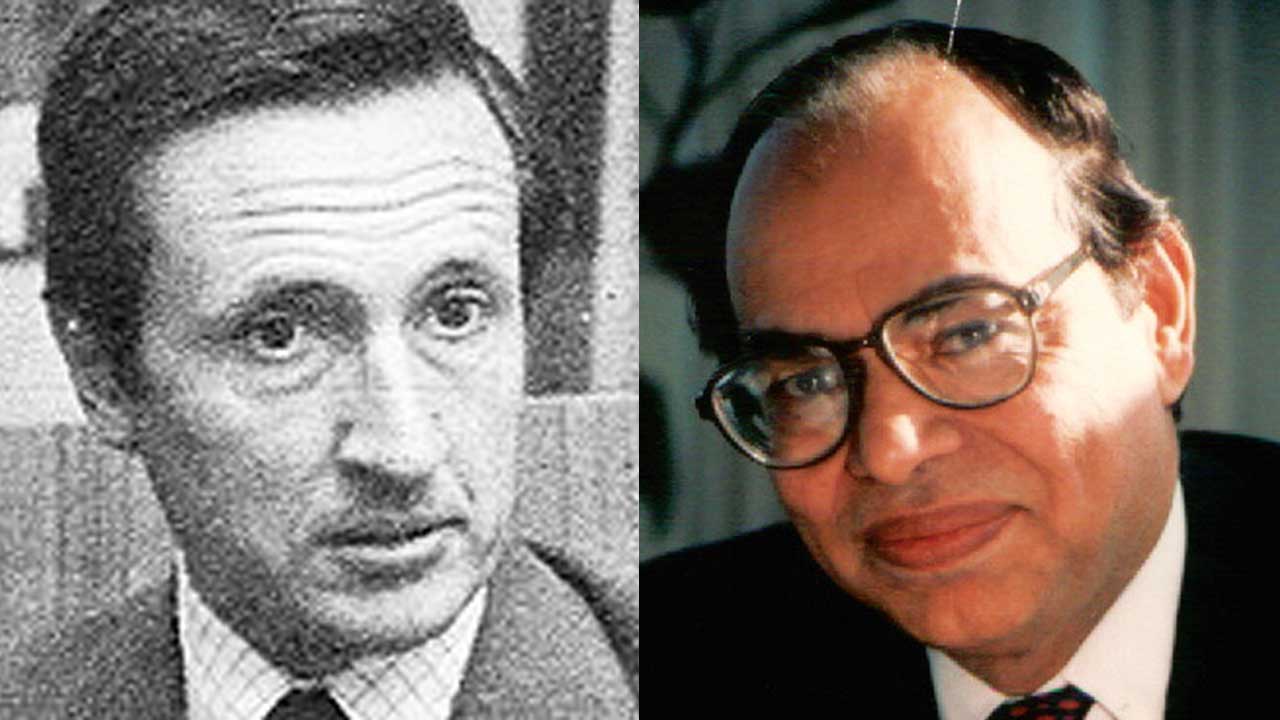 But as Grondoña pointed out, the fact remains that some cultures show themselves to be resiliently progress-prone while others are persistently progress-resistant.

That is to say, some cultures seem to lean towards progress, they are resilient, they spring back or rebound. Like a rubber band, they return to their original form or position after being bent, compressed or stretched.

Other cultures, however, seem to lean away from progress, they are persistently resistant to progress. In other words, unfortunately they repeatedly, continually or stubbornly resist progress.

Harvard University’s Lawrence E. Harrison said, “I believe that cultures that nurture human creative capacity and progress are better than those that don’t. Some may be offended by this assertion, but it is, I believe, corroborated by the persistent flow of immigrants from cultures that suppress progress to those cultures that facilitate it.”

Harrison says that fact of international immigration flows by common, ordinary immigrants confirms his opinion. In other words, more people want to immigrate to Canada than to Cameroon. More people around the world would rather immigrate to Boston than to Bhopal. And though both are very cold countries, more people would choose Sweden instead of North Korea.

Roman Catholic Argentina is Grondoña’s example of development resistance. But his observation includes all Catholic-based cultures of South America that originated from the Iberian peninsula of Portugal and Spain. Whether it is México or Macao, Spain or El Salvador, Portugal or Peru, Belgium or Brazil, they all share the same operative characteristics.

And Grondoña is not alone in his observation. Carlos Montaner, Mala Htun, Elizabeth Brusco, and Octavio Paz, writer and former Mexican Ambassador to India, have made similar arguments, documenting the same kinds of phenomena.

Alain Peyrefitte, French Minister of Finance, and Max Weber, one of the founders of sociology, and others, connect Protestant culture with progress/development-prone countries: Switzerland, Sweden, the United States, Canada, Denmark, Norway, West Germany, Australia, Finland, New Zealand and the United Kingdom. In Asia, British-influenced Hong Kong and Singapore would be included in that group.

Take for example, three related realities of “power distance”, “social distance” and “hierarchical distance”. Power distance is the extent to which the less powerful members of organizations and institutions accept and expect that power is distributed unequally. It is the degree of human inequality that underlies the functioning of each particular society.

Social distance is how much individuals or groups are excluded from participating in one another’s lives, how far they are removed from each other. It refers to how people feel towards each other, the reactions of persons to those of other groups, to feelings of sympathy, to considerations of social superiority or inferiority.

Hierarchical distance is the amount of rights, duties, and lifestyles based upon honour or prestige. It refers to the social layers of a vertical scale.

Examples of cultures of long or high hierarchical distance include the Latin sisters of Southern Europe— Italy, Spain, and Portugal as well as the nations of West, Central, and South Africa, including the Caribbean countries.

Geert Hofstede, who has studied and written extensively on this subject, says that cultures have consequences, because cultures have moral cores, and those cores differ. Different cultural values make almost all the difference, and create different kinds of social order.

So then, “it is the reverse in countries with short [or low] hierarchical distances. Technological changes happen in these countries because the people need technical progress. The political systems are decentralized and based on a representative system. The nations’ wealth, which is substantial, is widely distributed; and children learn things that their parents never knew.”

Grondoña’s position is close to the position maintained by Landes and Haq. David Landes, economic historian at Harvard University, argued, “Culture makes almost all the difference.”

“In fact,” he emphasised, “the study of the link between the economic and the non-economic environments is one of the most fascinating and rewarding aspects of this new analysis.”

Landes’s research also readily acknowledged the interface of many factors, all making varying contributions and differences. But the fact continually surfaces that, in the midst of the political, economic, social, and cultural dynamics, “culture makes almost all the difference.” That is the argument I advance here.

Grondoña includes 20 factors in his Cultural Typology of Economic Development. For the purpose of this case study, I have created eight categories (or cultural dimensions), drawing on eight of Grondoña’s factors and supplementing with information from a similar discussion by Lawrence Harrison (see figure).

My reason for this adaptation is, as Grondoña himself indicates, his list is “not definitive. It could be amplified by additional contrasts or it could be reduced, seeking only the most important differences.”

So, following Grondoña’s lead, I have chosen eight cultural dimensions for thinking critically (and with compassion and concern) about factors of a progress-prone and a progress-resistant society. I call it: 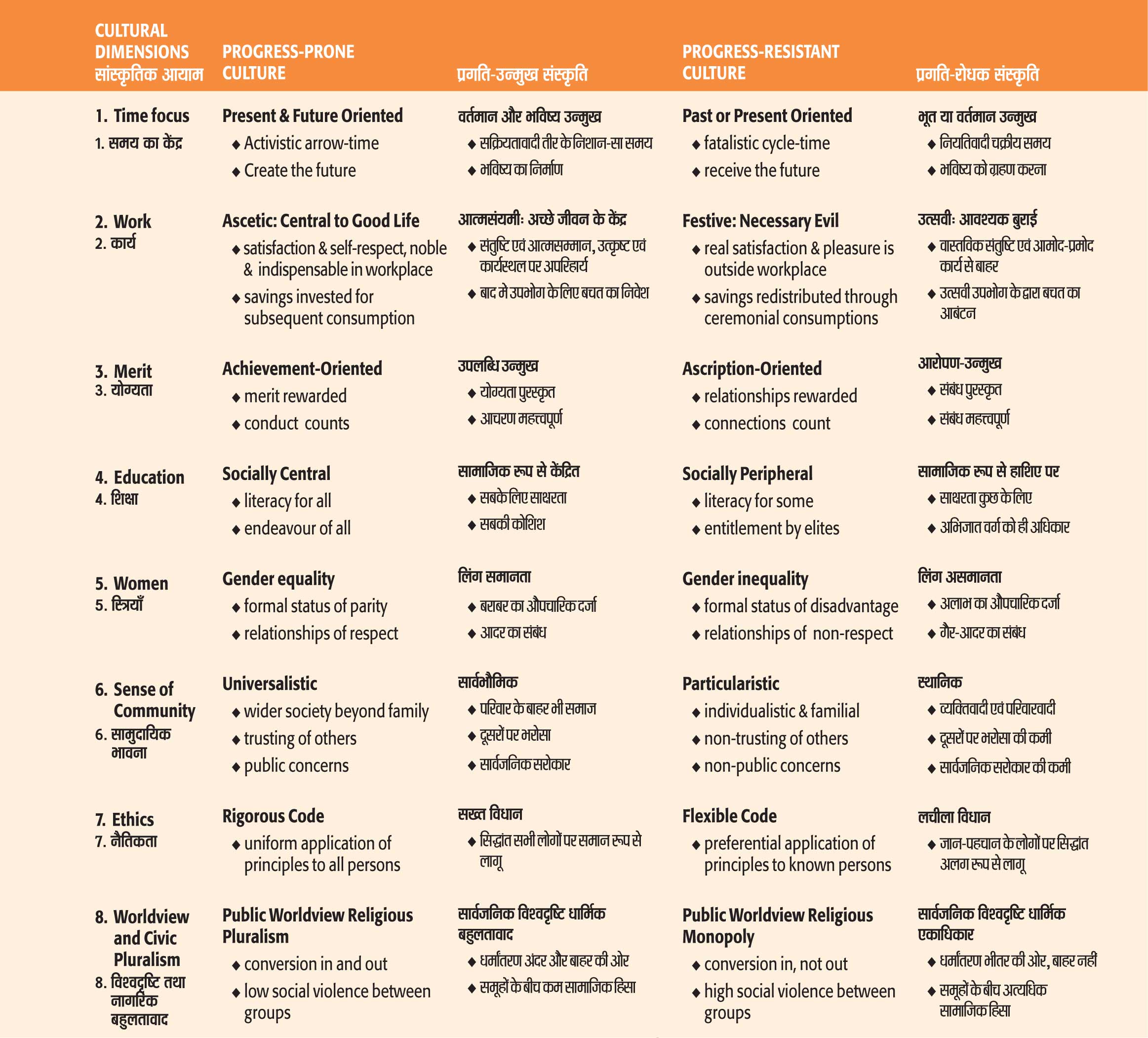 We will begin next month to look at each of the eight dimensions. We will compare many nations, and will return again and again to look at the consequences of culture in the two mountain nations of Switzerland and Nepal.

Published in the February 2012 issue of the Forward Press magazine