The 29th national convention of BAMCEF (Meshram) was held at Malda Town in West Bengal from 22 to 26 December 2012. The meet witnessed enthusiastic participation by representatives from 500 districts and 4500 development blocks from all over the country. Members of BAMCEF’s sister organizations Rashtriya Mulnivasi Sangh and Bharat Mukti Morcha also took part in the convention. The inaugural session began with the speech of Sambhaji Raje, a descendant of Chhatrapati Shahuji Maharaj.

On the first day of the convention, a serious discussion was held on the topic “Indian Democracy: Real or Sham?” Former Justice Sabhajit Yadav, Charuben Chauhan and Kanchanlata Lanjvekar spoke on the topic. On the second day, many searching questions were raised on the role of the Brahmanical media and Census officers. The tendency to blame Muslims for the Partition was also discussed. Many eminent speakers suggested that to end the feeling of alienation among the Muslims, a common front of SCs, STs, OBCs and Muslims should be forged. 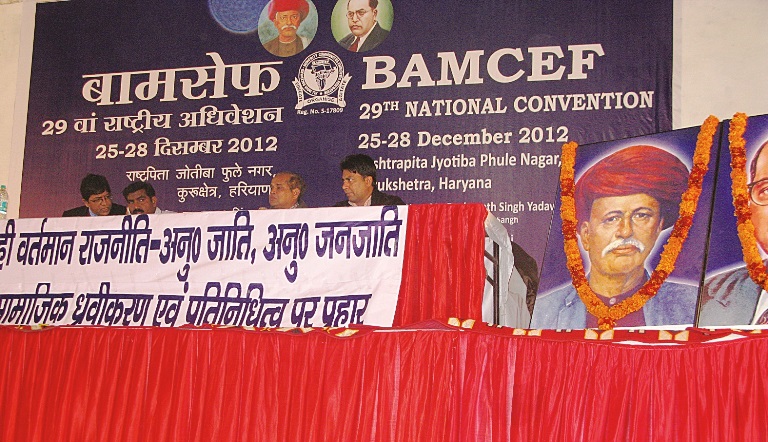 In the third day’s session, the decision to grant reservation in promotions to SCs and STs but not to OBCs was termed a conspiracy. The Naxal policy of the Government of India was also debated and discussed. The fourth and fifth day of the convention was devoted to Bharat Mukti Morcha patronized by BAMCEF. The need for building a nation-wide people’s movement was stressed. In this session, former Chief Justice of India Justice HS Kapadia’s statement that the “judiciary should operate within the Constitutional framework and should not try to cross the limits set by the Constitution” was hotly debated. Putting up his viewpoint, former Rajasthan High Court judge Justice RK Akodia said that the issue needed to be understood and discussed in all its dimensions.

Waman Meshram, national President of BAMCEF, who chaired all the sessions, said that corruption, poverty, starvation and communalism were eating into the vitals of the nation and were propelling the country on the slippery path to ruin. Meshram called upon all the workers to come forward and launch a people’s movement for bringing about systemic changes in the country. BAMCEF (Borkar) held its 29th national convention at Rashtrapita Jotiba Phule Nagar, Peepli Road, Kurukshetra from 25 to 28 December. On the inaugural day the issue of representation of OBCs in promotions was discussed. BD Borkar, N. Gangadhar, Devnarayan Singh Yadav, Vikram Singh Pawar and KS Chauhan expressed their views on the subject. On the second day, there was a serious discussion on the Brahmanical conspiracy to divide the original inhabitants of India by instigating riots between Muslims and tribals. Speakers from different parts of the country presented their views on the subject. Besides, the issue of maintaining discipline and decorum within the organisation was also discussed.

On the third day, JNU Professor Vivek Kumar, Dr. Ajeet Chahal,
SK Anand and Kailash Chandra aired their views on the topic “Is it treason to call India as Hindusthan?” In the concluding session, Hemraj Patel urged the Mulnivasis to raise their voice against the Brahmanical educational policy, which, he said, was a fraud being perpetrated upon the Bahujans. Journalist and analyst Nikhil Anand talked about the contemporary politics of reservation which was leading to social polarization of the Backward Classes and was diluting their representation. At the concluding session, national general secretary DR Arya and national President Ashok Parmar, while thanking all the participants, called upon them to launch a struggle for social change at the ground level.

The national convention of BAMCEF (Tara Ram Mehna) was held at Sant Kabir Nagar, BMC grounds, Ghatkopar, Mumbai from 25 to 29 December. The current problems of the original inhabitants were discussed and the need for struggling against Brahmanism at the ground level was emphasized. The five-day convention was chaired by Tara Ram Mehna (National President). Central executive committee member Veer Singh contributed immensely to the success of the meet. Greeting all the members, he appealed to them to launch a decisive struggle for effecting systemic changes.