On this historic day, Patna University witnessed the first student union elections after 28 years. The last time, in 1984, the anti-emergency hangovers were slowly being fading from young minds. During the 70s PUSU produced many leaders from all parties who to this day dominate Bihar politics; prominent among them are CM Nitish Kumar, RJD leader Laloo Prasad Yadav, Deputy CM Sushil Kumar Modi and many more.

This time PUSU elections were contested under the Lyngdoh committee rules in which all the student organizations of different political parties took part. Thanks to the commitments of the Patna University Vice-Chancellor Shambhu Nath Singh the elections ended peacefully. It is not a small thing considering that most of Bihar’s big leaders, who are themselves a product of student union politics, were hankering win these proxy battles within the universities among the students. The Right wing ABVP (BJP), the left wing AISA (CPI-ML), AISF (CPI) and AIDSO, the centrist NSUI (INC) and (NSU) NCP, the socialist CRJD (RJD), CJD-U (JDU), C L JP (L JP) all came ahead to contest the elections alone without any formal alliance. Into this established set of student groups, some students active in JNU under the banner of All India Backward Students’ Forum (AIBSF) joined the fray just 15 days before the elections. Their hardcore pro-Dalit-OBC-Pasmanda agenda came as a shock to the many contesting parties. The late starter AIBSF was able to attract many students from deprived communities and especially OBCs who left the CRJD (RJD), CJD- U (JDU) and CL JP (L JP) to join AIBSF. That the entry of AIBSF into PU campus politics was perceived as a real threat was confirmed by the attempt on their lives of its Convenor Awdhesh Laloo and activist Imtiyaz . Somehow both escaped with their lives though they are still recovering with broken ribs, thigh and chest bone. 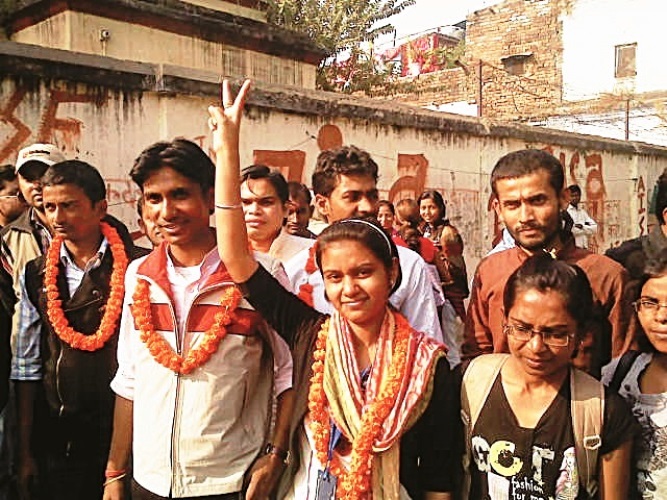 Most of the candidates of all major organizations belonged to upper caste except AIBSF (MBC), CRJD (Yadav) and CLJP (Pasmanda). Though some right-left wing parties put up a Dalitbahujan candidate, they could not ensure their victory. For the President’s post ABVP candidate Ashish Singh (Kayasth) won, while AISA candidate Divya Gautam (Bhumihar) and NSU candidate Pragya Raj Shiva (Bhumihar) came second and third with AIBSF candidate Usha Kiran (MBC – Nishad) in fourth position. The AISF candidate Anshuman (Bhumihar) and Anshu Kumari (Bhumihar) won as Vice President and General respectively.

All the socialist student organizations were cornered by AIBSF but CRJD (RJD) hijacked one candidate Abhishek Gupta (OBC – Bania) to claim as its own candidate who won as a Treasurer. Nitish Kumar’s student wing CJD-U saved the face by winning the Secretary post with Anupriya (OBC – Yadav) courtesy AIBSF, girls and local factors. Among the 18 executive members seats won by organizations are: AISF- 6, ABVP- 2, RJD-2, JDU- 2, AIDSO-2, AIBSF-2, Independent – 2. The most interesting thing in the whole result is that AISA, one of the most active student organizations, could not win a single seat in PUSU while a 15 days young organization in the campus sprung many surprises cornering the student wings of the JDU, RJD and LJP.

It’s clear that 15 years of Laloo-Rabri rule and 7 years of Nitish rule has failed to change the social composition in Bihar academics. All the academic institutions of Bihar are simply functioning like upper caste bastions with a very feudal mind set of. Democracy in Patna University campus has been restored and the expectations are that other universities of Bihar will follow suit in which 85 percent of the population is from the Dalit, Backward, Pasmanda communities. Will they come up intellectually and ideologically to realize their potential and be able to do what Laloo, Nitish and Ram Vilas cannot? 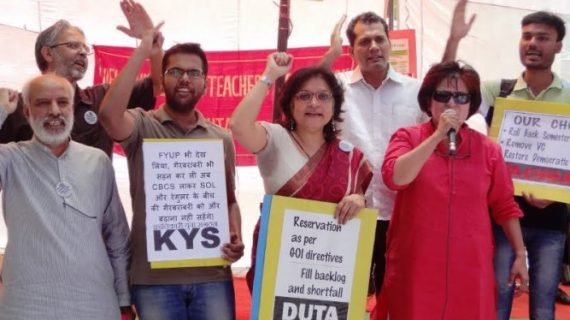 In the central universities the combined strength of SC/ST/OBC professors is merely 1.5 per cent. In all the other faculty positions, including reader, senior lecturer, lecturer, their numbers add up to only 12.2 per cent. 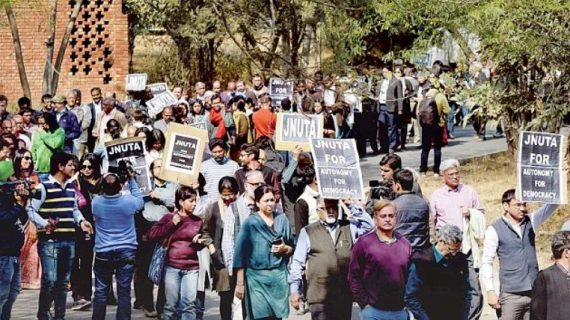 So what if someone keeps an eye on JNU’s public programmes?