I have heard that some people oppose yoga on the basis that it indoctrinates people into Hindu beliefs. I follow Ambedkar, so am confused. You are a Hindu but have a reputation for objectivity. So I wonder: what do you think?

It is true that some American parents have organised legal opposition to yoga classes because they fear Hindu indoctrination through yoga classes. They are concerned about the roots of yoga in Hindu rituals, traditions and beliefs. The question in their minds is: has yoga been sufficiently separated from these roots to be taught in secular schools?

We Hindus are ourselves divided about the answer because, as with almost everything else in relation to our country, no single answer is possible. 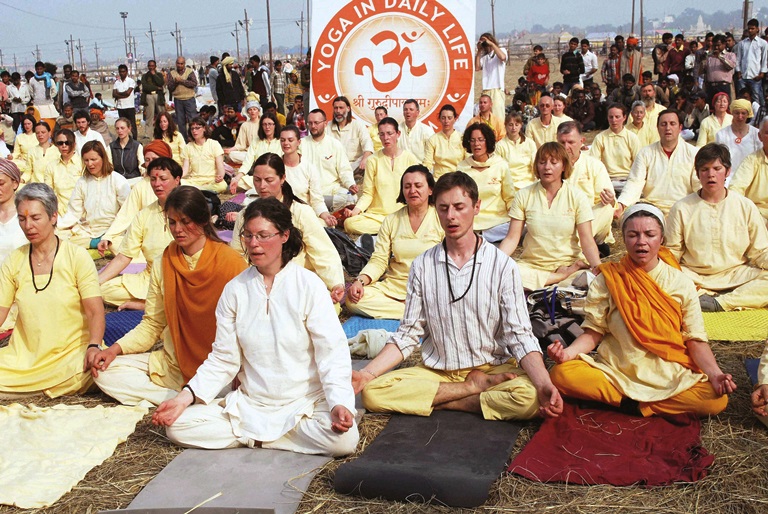 Some of us are happy about (and encourage!) the separation of yoga from Hindu rituals, traditions and beliefs, while others of us merely tolerate the connection, and yet others among us are very unhappy about the separation and would like to bring yoga “back” within some Hindu fold or other.
This range of opinions is partly because there are so many sorts of yoga now, with many different “gurus” promoting their own variety of yoga.

Few people (and few of those teaching yoga in the US or elsewhere) know anything about the history of the development of these different types of yoga (including the fact that yoga has been influenced by Western exercises!) – just as few of us know anything about the history of Hindu thought, rituals and practices.
The great advantage of oral traditions is that one can invent something new and pretend that it has existed for hundreds or thousands of years, just as one can stop (or change) something that was in fact going on for thousands of years – and no one  (at least among the followers) will necessarily be wise to what  has happened.

In any case, some of us Hindus practice yoga entirely shorn of religious, philosophical or explanatory content, simply for its physical benefits. Others of us practise some version of yoga primarily for its psychological benefits. Yet others of us focus on some variety of yoga or other that is intended to bring us under the influence of supernatural powers, whether from outside ourselves, or supposedly from within ourselves (kundalini).

The reason for all these differences among Hindus is that we have no central authority and no agreed criteria (for establishing what is true or false, acceptable or unacceptable) that are valid for all of us – and long may it remain so.
However, the disadvantage is that simple American parents (and government and educational authorities – and many in India itself) are rightly perplexed about whether to allow or disallow yoga classes in secular institutions.

I therefore propose the following tests to judge the suitability of particular “brands” of yoga, whether for yourself or for others:

2. What system of inspection or control does the central authority of that “brand” of yoga have for ensuring that its certified teachers are in fact continuing to teach in the authorised manner, and not bringing in some innovation, good or bad? People are and should of course be free to innovate, but are any such innovations checked, tested and approved by the central authority of that “brand” of yoga before they are allowed to be taught? It is only proper that a certified teacher (of yoga, or anything else) should not teach something other than what they claim to be authorised to teach.

3. Is any religious ritual involved (e.g. bowing to an image or using a particular verbal formula (mantra) for its blessing, vibrations or anything of that sort?

4. Does any explanation, offered for what happens during a particular yogic posture or exercise or its benefits, appeal to any Hindu tradition, belief or pseudo-scientific theory, including any “experiments” currently in progress?

If the “brand” of yoga being offered passes the four simple tests above, it is clearly being offered simply as a form of exercise for its physical benefits, much like any other physical activity (walking or running or calisthenics or sports).

To such a “brand” of yoga, there can be no objection on the part of anyone – though you might prefer one or other form of exercise, that is simply a personal preference, nothing more.

As for other forms of yoga (e.g. which include some veneration of an image, or use particular shlokas, or focus on “awakening kundalini”) these are clearly identified with some form of Hindu thought or ritual, or even some supernatural force – and you have to decide whether or not you want to subject yourself to such a form of yoga.