At this stage in life, it is difficult to zero in on any particular story, novel or character as one’s favourite. In my tender years, I had read Gorky’s ‘Mother’ and its hero Pavel ruled over my mind and heart for a very long time. It is not that ‘Pavel’ or ‘Mother’ do not hold any significance for me today but when one has read hundreds of novels, it becomes difficult to decide which character has impressed one to what extent. There are many novels and stories, the narratives or characters which fill us with exhilaration or bring tears to our eyes. According to the critic Dr. Ramvilas Sharma, the writings which force us to think are important. It is a matter of coincidence that my favourite writings fall in this category. At a personal level, my favourite character is Kamal, the central character of Sharatchandra’s novel ‘Shesh Prashna’. The Bengali novelist Sharatchandra is considered a writer with a rare insight into the psyche of women. Ramvilas Sharma says that after reading Sharatchandra, we cry for 15 minutes and think for 5 minutes. That means Sharatchandra dealt more deftly with emotions than with thoughts.

But his novel, ‘Shesh Prashna’ not only forces us to think but keeps us pre-occupied with those thoughts. The main character of the novel Kamal, daughter of a foreign father and an Indian mother, is the possessor of ravishing beauty and sharp intellect. She is rejected by society at large. In the caste and varna-dominated Indian society, she does not fit into any slot. But her thoughts are such that they can fill the reader of the novel with exultation and enthusiasm even in the 21st century. Kamal can still jolt us from our stupor – force us to question our values and principles. She is so firm, prudent and clear in her thoughts that she does not lose her patience even in the most adverse of circumstances. She knows that the society harbours only hatred for her but she loves the same society. She marries the lecherous music teacher Shivnath and because of that, people keep a close watch on her. She begins visiting the place of Aashu Babu, who is deeply influenced by the Bengali Renaissance, and whose house is a centre of intellectual discussions. 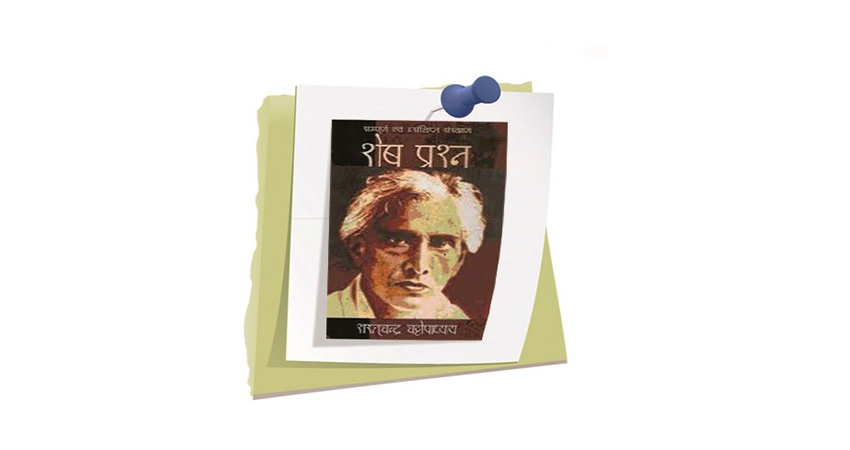 Aashu Babu’s daughter Neelima considers Kamal a woman of loose character and asks her father not to allow Kamal to come to their place. But subsequently, Neelima elopes with Shivnath creating quite an embarrassing situation for Aasu Babu vis a vis Kamal. But Kamal is unperturbed. She analyses everything in her own way. She has no complaints with Shivnath or Neelima. Kamal also questions the institution of marriage. She feels that marriage cannot have an everlasting beauty because  no beautiful thing lasts forever. All beautiful flowers, ultimately, wither away. Permanence is akin to turning into a stone.

‘Shesh Prashna’ was written around 1930. That was the time when the Bengali Renaissance was taking a new turn. In the beginning of the 20th century, Rabindranath put several question marks on the national movement through his ‘Gitanjali’ and ‘Ghare Baire’. In those days, Sharat Babu was immersed in the conflict between ‘Devdas’ and ‘Charitraheen’. In between, his novel ‘Patherdevi’ was published, which soon became the darling of the nationalists. It is said that Subhash Chandra Bose had a great liking for this novel. The novel was published by the printing press of Shyama Prasad Mukherjee, the founder of the Bharatiya Janasangh (the precursor to today’s BJP) and the British government got its copies confiscated from the Press itself. Subsequently, for a short period, Sharatchandra too joined the ranks of impatient nationalists. He wrote a letter t seeking Rabindranath’s intervention but the latter wrote back only to snub him. This exchange of letters turned the relations between the two great authors quite bitter. Five years later, he wrote ‘Shesh Prashna’ and quit the camp of the nationalists.

‘Shesh Prashna’ earned the ire of the genteel class of Bengalis. Girls were barred from reading this novel because in it, Kamal emerges as an unique rebel. It seemed as if, through this character, Sharatchandra transcends his own literary tradition and joins Tagore’s tradition. To prevent real ‘Kamals’ from emerging in the society, the Bengali genteel class had imposed a social ban on the novel but soon Bengali society was overflowing with Kamals. The character represented the Bengali Renaissance. Kamal makes a
succinct and pointed criticism of nationalism as expounded
by Bengal’s Anushilan Samiti.

The publication of this novel coincided with the martyrdom of Bhagat Singh. The entire country venerated Bhagat Singh and his supreme sacrifice. So much so that Gandhi and other national leaders were relegated to the margins of the freedom movement. In those times, commenting on the martyrdom of a similar character Harendra, Kamal says “This is what foolishness brings you to!”.