Recently, within a gap of merely two weeks, two important events took place in Bihar,. Both will have   profound impact on the social and political future of the state. The first event took place on 30 September, when, in one of the Fodder Scam cases, a CBI court convicted former chief minister Laloo Prasad Yadav. The second was the acquittal of all the 26 convicted in the Laxmanpur Bathe (Arval district) massacre by the Patna High court. The HC decision came on 9 October. The Ranvir Sena of Bhumihars had slain 58 Dalits, including 26 women and 15 children at Laxmanpur Bathe on 1 December, 1997.

There is hardly any similarity between the two crimes. They were of entirely different natures and the law views them quite differently. The first is a case of financial irregularities and the second, of cold-blooded murder. In the first case, the accused is Laloo Prasad Yadav, an OBC. In the second case, all the two dozen-odd accused are upper caste Bhumihars. In the case of financial irregularities, Laloo was sentenced to 5-years’ imprisonment while in the case of murder, all the accused were proclaimed not guilty. The lower court had found all of them guilty and sentenced 16 of them to death and 10 to life imprisonment.

Both these incidents have raised two vital questions. The first is how and why the administrative machinery failed to garner facts, evidence and witnesses to ensure that the accused were convicted. Is this not reflective of administrative apathy or anarchy? The second question is why the judicial system, which took every possible care to ensure the conviction of Laloo, failed to secure the conviction of the guilty of the Miyanpur, Bathani Tola, Nagri and Laxmanpur Bathe massacres?

In the wake of the Laxmanpur Bathe massacre, the Ameer Das Commission was appointed by then chief minister Rabri Devi to probe the political and administrative connections of the Ranvir Sena. The commission had prepared its report after painstaking work. However, it was disbanded in 2006 by the new chief minister Nitish Kumar before it could submit its report. The grapevine has it that the report concluded that the BJP and Bhumihar politicians had links with Ranvir Sena. This had upset the now ruling BJP and the commission was disbanded under the party’s pressure. 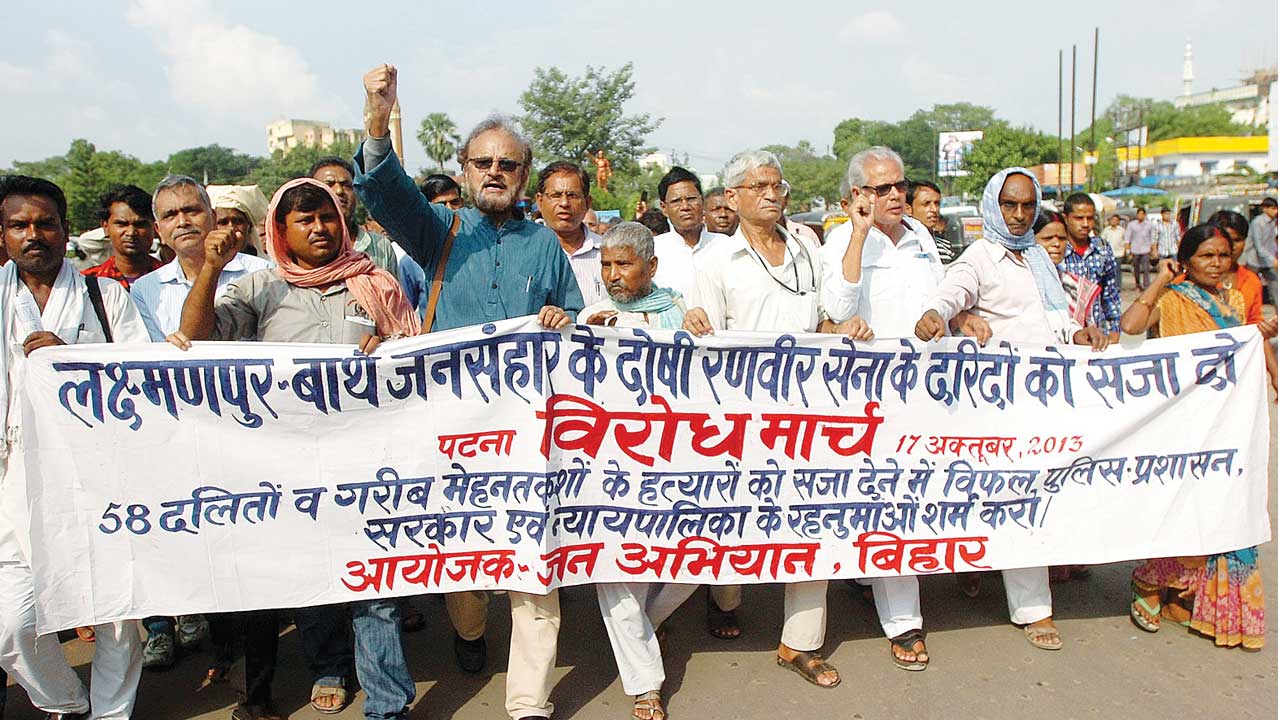 The politics of Bihar spins around the axis of caste. Political parties, their policies, their workers and the people – all are guided by caste considerations. Against this backdrop, the two recent events are bound to have a long-term impact on the politics of Bihar. Is it a mere coincidence that the judge who convicted and sentenced Laloo Prasad happens to be a Bhumihar? One of the two judges of the HC bench that delivered the judgment in the Laxmanpur Bathe case is also a Bhumihar.

Bhumihars are important players in the politics of Bihar. Laloo Prasad ruled Bihar for 15 years by confronting the challenge posed by the Bhumihars. And now, Nitish Kumar is ruling the state by forging a joint front with the Bhumihars.

After the breakup of the BJP-JDU coalition, the Bhumihars seem to be turning towards Nitish Kumar and distancing themselves from the BJP. On the other hand, after Laloo’s sentencing, the Yadavs are once again getting united behind him. In any case, Nitish Kumar is in the throes of a crisis. The acquittal of the accused of Miyanpur, Nagri, Bathani and Laxmanpur Bathe massacres of Ranvir Sena has generated a wave of anger and resentment amongst the Dalits and OBCs. They feel that they have not got social justice from Nitish Kumar . Now, the BJP is using Narendra Modi to play the MBC card and that may help the BJP consolidate its standing among some of the backwards. In such a scenario, it will become difficult for Nitish Kumar to maintain his popular base.

The acquittals and conviction will also impact social relations in Bihar. The Bhumihars, who believe in the politics of feudalism and exploitation, may close ranks. A similar, parallel reaction is likely in the Dalit-OBC communities. The 17 per cent Muslims, a prominent part of the RJD’s old M-Y (Muslim-Yadav) combine, too will be deciding which way to vote.  Which party or parties benefit by these re-alignments remains to be seen.

If issues of caste, land and self-respect were the focal points of the standoff between caste groups in the 1980s and 1990s, this time, the legal process and court judgments are at the root of the confrontation. Now, even court judgments are being questioned and the casteist character of the judiciary is being discussed and debated openly. What is clearly emerging is that a seismic shift in Bihar politics is in the offing. After an earthquake the old maps are obsolete; a compass is needed. In Bihar the “true North” points to social justice.